Who is Crissy Dastrup???

Whilst she might serve as the worst nightmare of Kansas City 4th District incumbent councilman Eric Bunch . . . Most people don't know her work.

She was formerly the councilman's assistant and now she's running to replace him.

Behind the scenes . . . Staffers for the council dude launched a series of really nasty social media attacks on her until cooler heads at 12th & Oak whispered to the politico that this wasn't a good look.

Ms. Dastrup has served as a volunteer in several campaigns and insiders have probably seen her and local activist Justice Horn jetting back and forth betwixt protests and community meetings over the past year.

Just this week Ms. Dastrup garnered criticism for a loan from her campaign to Justice Horn's funds - A HUGE no-no and something that she quickly had to take back, amend and explain.

Now . . . Once again, insiders are raising eyebrows at her recent endorsement . . .

WHY SHOULD ANYBODY CARE WHO CRISSY DASTRUP RECOMMENDS?!?!

In this election we're witnessing a slate of younger contenders (i.e. under 45) who are unaffiliated with established networks that typically power local politics.

Some of our progressive friends have called it a Gen Z movement . . .

Of course we should let Ms. Dastrup clarify her support for a slate of candidates . . .

"🚨ENDORSEMENTS🚨
August 2 is our opportunity to elect local leaders we trust to steward millions in tax dollars and advocate for our communities.
These are the candidates I believe will listen to the people and SHOW UP to build a better Jackson County. 🗳💯

There is a lot of info here and a basic idea of what these upstart politicos are about . . .

Outsider candidates typically don't do well in Kansas City elections. A couple of Ms. Dastrup picks have great connections and their own solid credentials . . . However . . .

We'll see if this heartfelt NEXTGEN advocacy makes the difference. 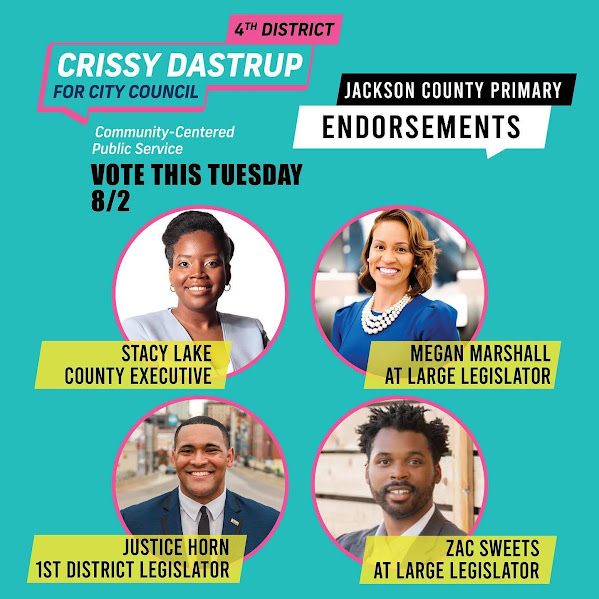 UPDATE: THE WHOLE POINT OF THIS POST MIGHT HAVE BEEN TO NOTE THAT ABSENCE OF A "PAID FOR" LINE . . . WHICH IS ALSO A CAMPAIGN NO-NO!!!

Stacy Lake is a long-shot to replace Exec Frank White but it's not for lack of trying or running an honest campaign and seeking a face-to-face discussion about the future of the county. 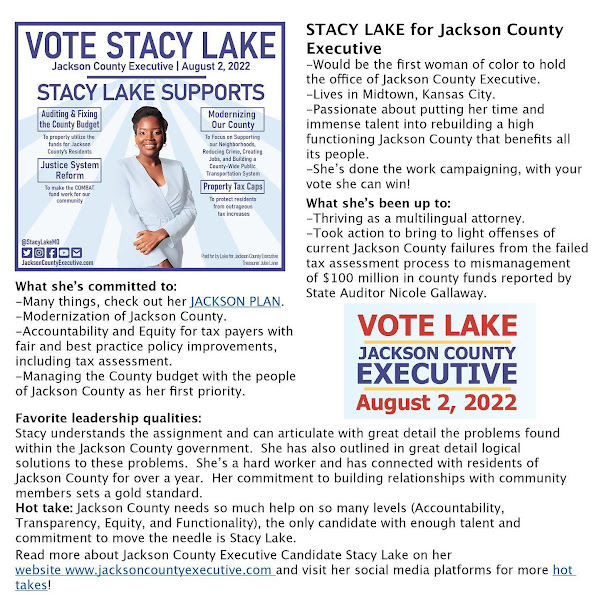 Zac Sweets is an insider with the best name in KC politics but, unfortunately, he hasn't garnered much "face time" or recognition outside of the civic set. 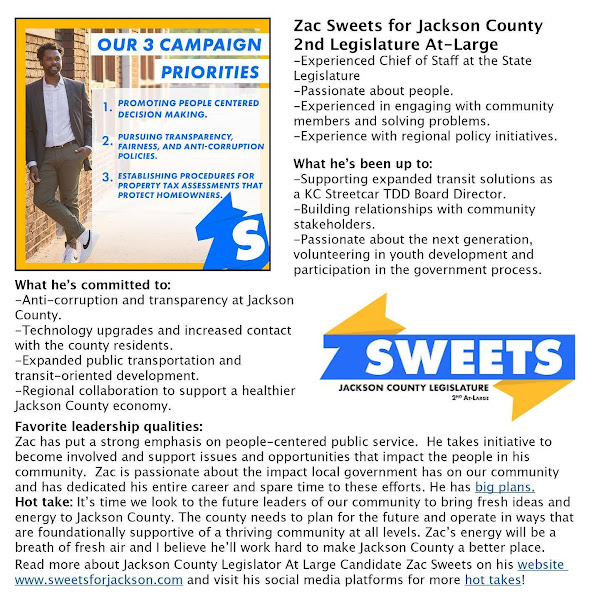 Former Marine Megan Marshall is the strongest contender of the bunch . . . By all accounts she has run an excellent campaign against incumbent Tony Miller and this is the most competitive contest on Jackson County primary night.

The winner will have a great deal to say about the future of the Courthouse. Insiders will be WATCHING VERY CLOSELY. 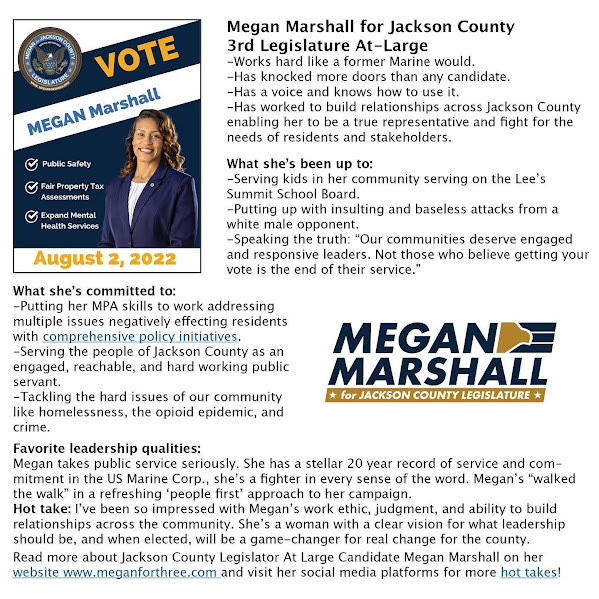 We all know Justice . . . The world has seen the outset of his career as an activist. Here's a bit more about his campaign platform . . . 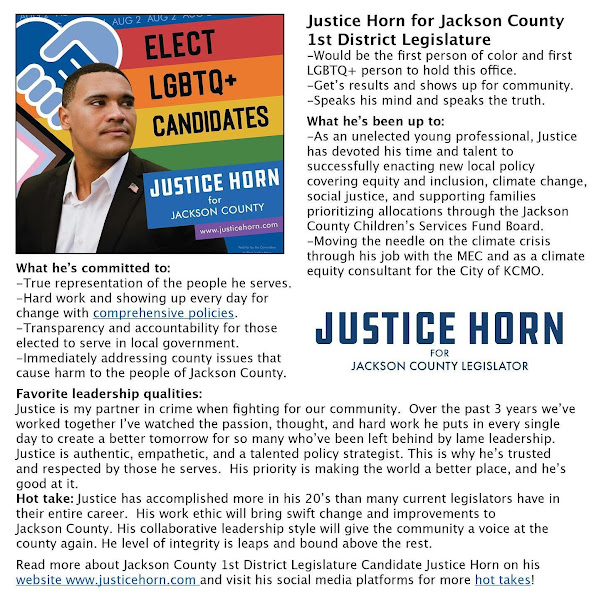 HERE'S WHAT WE REALLY LIKE ABOUT CRISSY DASTRUP'S CAMPAIGN ENDORSEMENT BLAST . . . THERE'S GREAT INFO ABOUT JACKSON COUNTY AND WHY VOTERS SHOULD TAKE INTEREST!!! 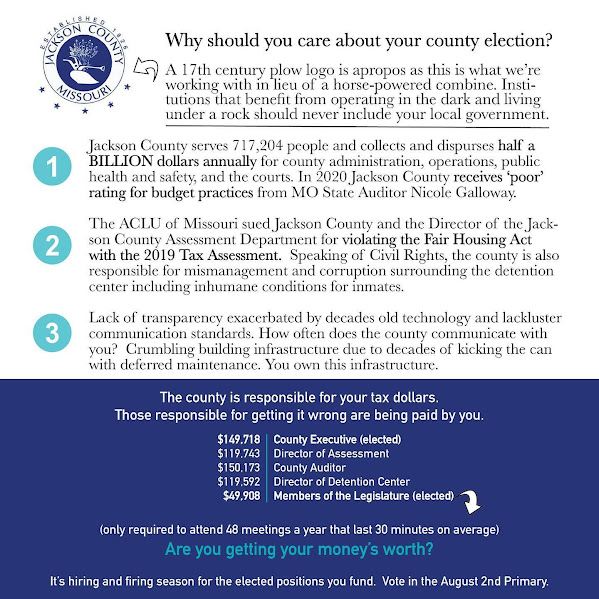 In less than 72 hours we'll find out if these Kansas City metro political newbies have a future or if they'll have to try again to convince a town that loves to talk about reform but never really votes for it.