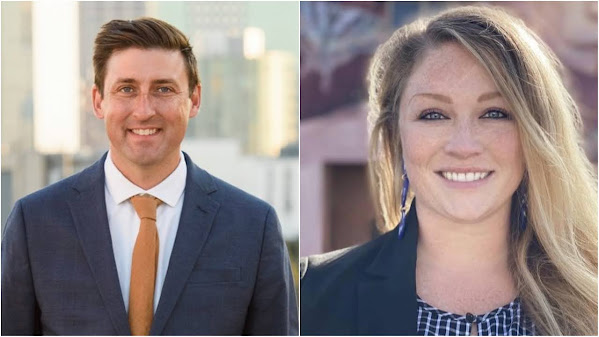 Our imagination is running wild with all of the things that challenger Crissy Dastrup knows about 4th District Council Dude Eric Bunch. After all, she worked with him closely for a few years at 12th & Oak.

Don't worry, he's probably wondering the same thing. Every night. In the dark. By himself. Drinking an overpriced craft beer.

In the coming year this promises to be one of the most INTERESTING council races because it pits a relatively unpopular council dude against his former employee.

Over the past month friends of Council dude Bunch have been writing a slew of mean tweets and social media attacks against Ms. Dastrup - All of the hateration directed at the ambitious young woman kinda reveals that the Bike/walk advocate and his cabal of amateur urban planners are likely not as progressive as they have led their followers to believe.

Overnight, the contender confirmed that chatter . . . Or at least the part about her campaign ambition.

More than any other place in KCMO, the 4th District is adamant about supporting women in public office so this challenge should likely get a serious amount of support.

The reality of turnout for KCMO in-district elections is that the pool of voters typically runs about 12 to 15K. In this part of town, most of the frequent visitors to the ballot are still very angry that Senator Bernie Sanders isn't President and/or that their trash never gets picked up on time.

More than anywhere in KCMO . . . The 4th is always tuned to either MSNBC or NPR.

Still there's a growing divide betwixt rich & poor and more than a bit of resentment for the new gentry amongst longtime residents.

Thankfully . . . This is one election in Kansas City wherein social media messages don't matter and people still expect to see their councilperson in public and at so many soul crushing neighborhood meetings.

Make no mistake . . . This will be an endurance contest that always escalates toward the finale.

We're eager to see how it plays out.

KANSAS CITY, MO. - Crissy Dastrup, Hyde Park resident and public servant, has launched her campaign for the 4th District In-District seat of the City Council of Kansas City. Crissy’s vision is for Kansas Citians to feel heard, supported, and celebrated by their local government. Her priorities will include small business support, addressing the housing crisis, transportation equity, and the community voice.

“I'm running for city council because I love Kansas City and I’m ready to tackle our big issues. For too long, inequities like illegal dumping, access to public transit, and the affordable housing shortage have caused distress for people across our city. As your 4th District City Councilwoman, I will continue my track record of relationship and coalition building to solve problems for the growth and prosperity of Kansas City.”

Crissy has been in Kansas City for over a decade. Her passion for community involvement began as a board member for the Kansas City Ballet. Her volunteer experience spans arts, culture, economic development, transportation, education and more. Crissy is a professional “fixer” in Kansas City, helping all kinds of people solve important problems. She has invested countless volunteer hours working to strengthen the Troost corridor, and those efforts extend to the city at large. In the summer of 2020, Crissy brought people together from all parts of Kansas City to create and celebrate our six BLM street murals. KC Art on the Block: A Black Lives Matter project garnered acclaim and awards for creative placemaking and equity.

Crissy is founder and chair of the Board of Directors of Troost Market Collective, a nonprofit organization dedicated to supporting the diverse community of creative entrepreneurs in Kansas City. She also works with small businesses to engage in creative placemaking and utilize alternative funding opportunities in the form of local, state, and federal grants and incentives.

Crissy served the 4th District as legislative aide for two years in the office of Eric Bunch, the incumbent for this seat. During her time at city hall, Crissy championed historic legislation, including the Kansas City LGBTQ commission, the first commission representing diversity in sexuality and gender in Missouri. As the city hall liaison to the Bartle Hall Warming Center in the winter of 2020, Crissy collaborated with the Downtown Council to structure ongoing operations. Other highlights include organizing Kansas City’s successful AAPI Culture and Heritage Festival, recognition of Indigenous People’s Day and Day of Transgender Rememberance, and the nationally recognized COVID-19 memorial at the World War One museum.
####################