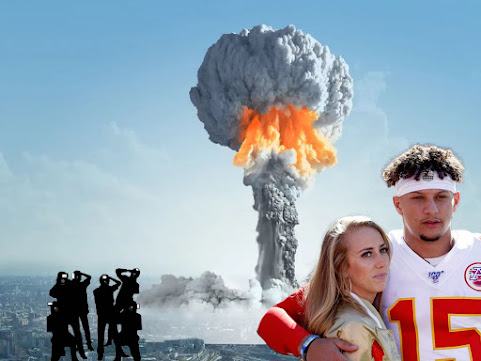 To be fair, despite big game defeat, Patrick Mahomes has garnered respect from his celebrity colleagues.

Basketball kingpin LeBron James sent a shout out to the local QB as they both champion the BLM movement.

Still, as always, the Brits are harder to impress.

Here's the word and a gossipy tidbit sent our way off-the-record, on the QT and very hush-hush . . .

Just as we thought Brit tabloids were getting nicer, here's explanation from behind the scenes . . .

"Their acolytes brazenly demand mid-six-figures for a pictorial and that's simply unfeasible for European readership. Honestly, the interest isn't there after the embarrassing Super Bowl flop. It's unfortunate because we have found a growing audience for American sporting life and this would have been a grand opportunity. But not at that cost. A victory would have facilitated further talks or a non-exclusive deal but we'd rather allocate those resources for a footballer who has a greater global reach. Your question about the bidding war deserves some consideration because the process thus far has been simply ridiculous . . . Merely sending this reply because you give us a laugh from time to time and you're assumption has proven correct . . . The entitlement of their "people" was distasteful and it's not something we wish to pursue. They can call us again if Mr. Mahomes wins the Super Bowl next go round."

As bids are drying up behind the scenes we notice baby momma Brit teasing her social media influence with cute fashion shots of baby clothes for People magazine.

Nevertheless, like all of Kansas City post-COVID, the power couple might have to live with lower expectations.