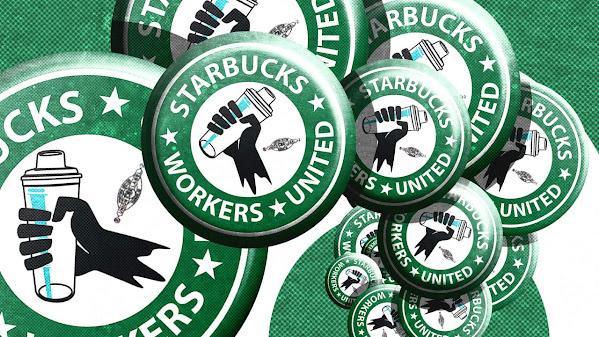 In the aftermath of an ultra-popular corporate coffee closure . . . There's a lingering question:

DID STARBUCKS SHUT DOWN THE PLAZA LOCATION OVER SAFETY CONCERNS OR BECAUSE OF RISING UNION ADVOCACY?!?

Of course people on both sides of the debate are contradicting one another.

Meanwhile . . . Protesters were out in full force saying that their union organizing sparked the shut down.

A few things to consider because we've noticed some worthwhile conversation from people who obviously don't visit the place . . . For TKC, this was one of our regular stops.

- Remember that our blog community was the ONLY news outlet which ACCURATELY reported a spate of gunfire near this location earlier in the month.

- Plaza panhandlers and homeless loiterers were a minor problem at this location but for the most part they didn't bother customers.

- Let's not forget . . . Before the pandemic the Plaza Starbucks was the busiest location in the metro and one of best coffee shop locations in the Midwest.

Here's what everybody is forgetting . . .

The BLM riots/uprising have seemingly forever changed the Plaza and this closure seems like ONGOING FALLOUT from weeks of violence that was seemingly endorsed by local progressives.

Again . . . We remind readers that Mayor Q joined the mob of protesters and shouted "no justice, no peace" during a riot and then council quickly moved to provide "clemency" for protesters charged with crimes in the aftermath.

We share a peek at the blame game as yet another business shuts down in this formerly iconic entertainment district . . .

The store's closure came suddenly, with employees alleging they were only told 15 minutes before the public announcement was made. According to Starbucks barista Josh Crowell, who was employed at the Country Club Plaza location, the company cited safety and security concerns as the reason for the closure. Similar reasoning was used to support the closure of 16 other Starbucks locations earlier this summer, which were met with skepticism by some. The coffee chain did not explicitly close pro-union stores, though two of the 16 had already formed unions and the third was in the process of organizing its vote.

Tada Images/Shutterstock The store's closure came suddenly, per KSHB, with employees alleging they were only told 15 minutes before the public announcement was made. According to Starbucks barista Josh Crowell, who was employed at the Country Club Plaza location, the company cited safety and security concerns as the reason for the closure.