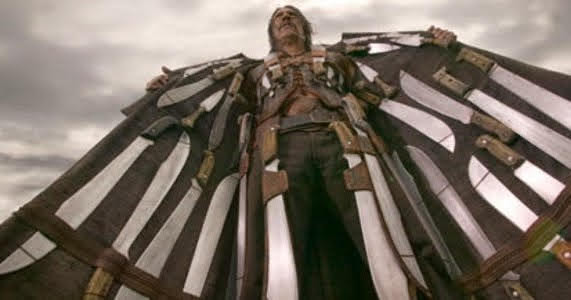 Whilst it's easy to assign blame . . . It's more important to understand that locals carrying machetes is a new trending fashion statement that speaks to an evolving way of life on Kansas City streets.

Remember that last year we reported a victim of a machete attack at City Hall in one of the homeless protest encampments.

"As patrol cars were arriving, the off-duty officer saw (the shooting victim) in the fetal position a short distance from a car in the lot. He reported kicking away a machete that was under his shoulder and seeing a large sheath on his back.

"The officer gave aid to (the shooting victim) and noticed a large amount of blood on the front part of his pants. He also initially thought (the subject) may have shot himself, as the officer did not witness the shooting firsthand.

"During a police interview, the man who shot (the alleged machete assailant) said he and his mother had arrived at the hardware store with a plan to purchase gardening supplies minutes before the tense encounter. Just after they finished parking, he said, (the alleged suspect) approached the driver’s side of his car and began staring at him.

"The man said he believed (the alleged machete assailant) was going to ask for change. But then, he told police, (the alleged assailant) unsheathed a machete from behind his back and struck the driver’s side window, causing it to shatter.

"Both the man and his mother were trying to get out through the passenger side door as (the alleged machete assailant)  ran around to the other side and started swinging at the mother, they told police. After she was knocked to the ground, the man said he retrieved a firearm from his car and tried to get (the alleged machete-wielding man) to leave.

"He said he was hit with the blade twice — once in the face and once on the shoulder — and then chased. He recalled firing as many as eight gunshots at his attacker’s “lower body to get him to stop” and stopped firing once he fell to the ground . . ."

Read more via www.TonysKansasCity.com link to this paywall story . . .

Witnesses told police the man was swinging the blade and chasing a man, who turned and fired several gunshots. The armed citizen said he was aiming for the lower part of his body "to get him to stop," according to court records.