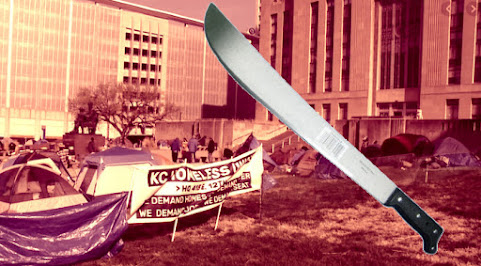 Check the mayor's feed and notice that quite a few residents are confronting him about the incident to no avail.

Special thanks to KICK-ASS TKC TIPSTERS who sent this note a few moments ago . . .

"Hey TKC, there's video from yesterday afternoon that shows this guy with a large knife (I believe around the 12 min mark). Not illegal to have, I don’t think, but still doesn’t seem safe. A guy matching this EXACT DESCRIPTION attacked someone with the knife at the camp last night . . . A few of us sent this pic to the Mayor last night asking him if the camp seemed safe."

The mayor continues his silence on the issue and has only granted a softball interview to the newspaper.

Again, everyone is innocent until proven guilty.

Right now we'll post the photo that's circulating around social media showing a dude who might be finished enjoying a burrito bowl and is clearly CARRYING A VERY BIG KNIFE/MACHETE outside of city hall.

His maroon sweatshirt matches description of last night's incident. Again, we can't emphasize this enough that everyone is innocent until proven guilty and this photo merely depicts a guy with a very big knife hanging out in front of city hall steps amid this protest. Posted for context . . . 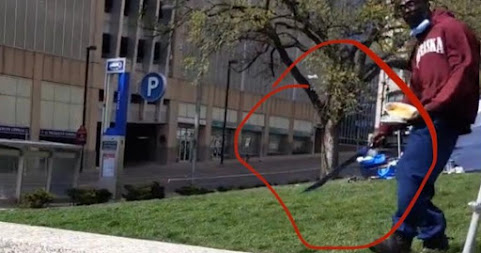 HERE'S DESCRIPTION OF THE INCIDENT FROM KCPD REPORTING ON THE CHAOTIC SCENE AND MACHETE ATTACK!!!

Social media is lighting up with different accounts of the incident but we think this is the MOST ACCURATE REPORT and offers insight into what's happening right now at 12th & Oak.

On 04-05-2021 Officers were dispatched to 12th and Oak on a reported disturbance involving a weapon. the dispatcher advised seven individuals were fighting, one armed with a machete and another armed with a shovel on the south lawn of KCMO City Hall. Upon arrival, Officers contacted the calling party (Security Officer for City Hall) who advised he captured an assault on the video cameras attached to 414 E. 12th St.

The video was reviewed at that time and showed the following: An unknown victim leave the area full of tents, on the south side of 414 E. 12th St. The unknown suspect left the same area and confronted the victim in the middle of the street just north of 12th St. and Oak. The suspect was brandishing a large machete-style weapon in his hand as he approached the victim. At that time multiple other individuals left the south side tent area and appeared to provide back-up for the suspect, one of these individuals armed with what appeared to be a shovel. The group began to chase after the victim to the area just south of 11th St. and Oak, where the suspect struck the victim with the machete, possibly in the head. The victim left the area and the suspect and other individuals returned to the tent area on the south side of City Hall. The suspect removed his maroon sweatshirt and threw it to the ground. The video was unclear where the suspect went or where the machete was placed. Upon arrival of KCPD Officers, multiple individuals left the tent area, north on Locust St.

A crime scene was located on the block of Oak St. from 11th St., south to 12th St. There was pooled blood and blood spatter located just south of 11th and Oak. Citizens that came to the scene from the area of Sprint Center advised a white male bleeding from the head was last seen south from Sprint Center. An area canvass for the unknown victim in the area and at local hospitals was conducted, but a victim could not be located. An extensive area canvass for a suspect or potential witnesses was conducted in the tent area on the south lawn of 414 E. 12th St. No one contacted by Officers advised they saw anything or advised that they were sleeping. A maroon sweatshirt with apparent blood as well as a large machete-style weapon were located on the south lawn area in plain view by Officers. Photographs were taken of the crime scene area. DNA swabs of the blood and recovery of the sweatshirt and machete were evidentiary items removed from the scene. We advised the calling party (Security) to place a hold on the surveillance video as he could not download it that night.