Quick question for our blog community this morning . . .

DO YOU KNOW WHAT JACKSON COUNTY EXECUTIVE FRANK WHITE HAS ACCOMPLISHED DURING HIS TENURE???

But I'm willing to wait for an answer.

In the meantime . . . We take a peek at a glossy mailer sent far and wide so that locals can garner just a bit of election advice for a maximum of two seconds before it hits the recycling bin. 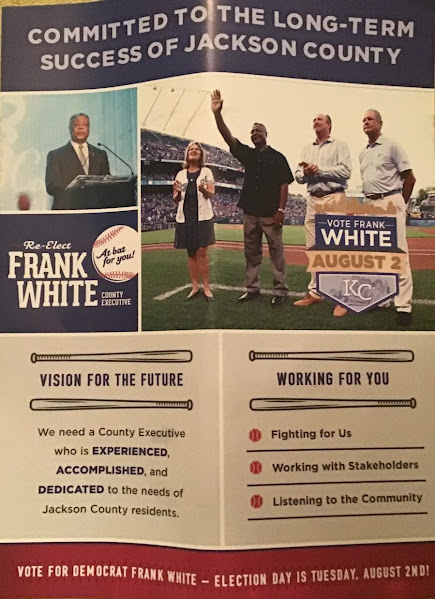 One and a half terms in office and he still doesn't have much to brag about . . .

- This might be the laziest mailer we've seen in awhile . . . At this point Pat O'Neil (or, more likely, his jr. copywriter or maybe a cousin) is just phoning it in and would like to be working on ANYTHING but this campaign.

- Confidence is nice but this just seems lazy. Example: "Listening to the Community" is something for a high school prez campaign . . . Not a talking point targeting adult voters.

- The front cover is without a single detail, no highlight, not even a catchphrase . . . It's possibly a vote for baseball . . . Which might be risky given mixed feelings about the Royals right now. 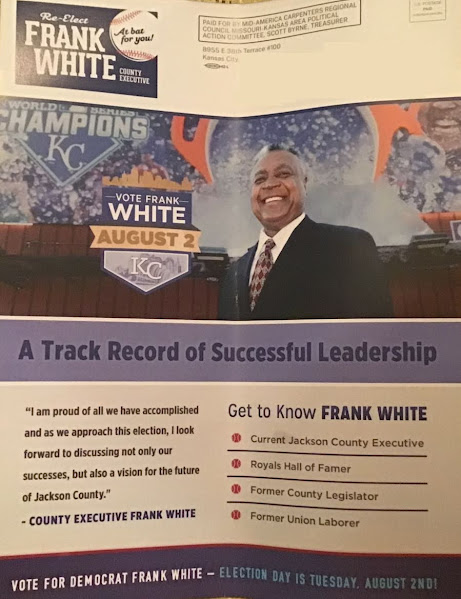 - What successes in the Exec's history is he bragging about??? Maybe it's that time that he avoided any real trouble over an embarrassing real estate crisis and sketchy accounting.

- The Exec claims to be looking forward to discussion . . . But recently he skipped his primary debate and refused to meet his challenger Stacy Lake.

The odds are that the Exec will walk past the primary without much trouble.

Yes, the newspaper is going to call her racist  . . . But anybody who bothers to look at her political history won't accept the propaganda.

If her handlers are smart they'll pour money into billboards & TV in order to build up her name ID.

Behind the scenes the word is that Missouri Republican leaders have taken an interest in attempting to score an upset victory that would be historic in Kansas City politics.

However, given the inevitability of upcoming property tax increases . . .

We'll get to see if local progressive voters & Democratic Party loyalists value their own finances over partisan loyalty.