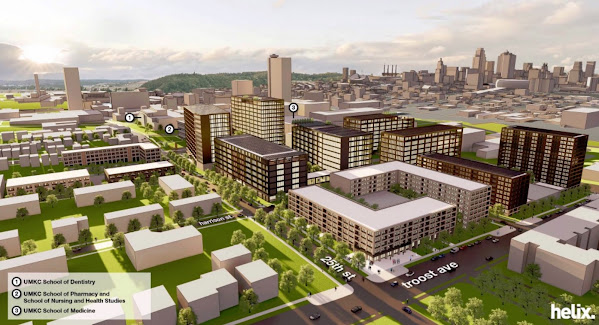 Per ushe . . . Local government involvement typically destroys EVERYTHING in its vicinity.

The progress has been debated as "gentrification" by the newspaper and jealous politicos.

Local politicos and UMKC are working to co-opt the progress ruin the area by building EPIC WELFARE TOWERS.

Here's a peek at the plan that will unwittingly be facilitated by Missouri Republicans . . .

"The Missouri General Assembly authorized $40 million for a proposed building that would house “state-of-the-art” dental teaching clinics and expanded medical school teaching facilities, according to UMKC.

"If Gov. Mike Parson signs the bill, officials at what’s called the University of Missouri-Kansas City Health Sciences District would have to raise $40 million in private matching donations to move forward with the project.

More deets on the gentrification in progress . . .

"As of a year ago, more than 16,000 people now work or study in the Hospital Hill area, and its triggered more than $550 million in new construction.

"That figure includes more than $234 million invested by private developers building new apartments and commercial projects on the surrounding blocks along Troost, the East Crossroads and near Crown Center."

We blogged this bit of hype FIRST but we're happy that a eco-devo hack blogger did a bit of follow-up.