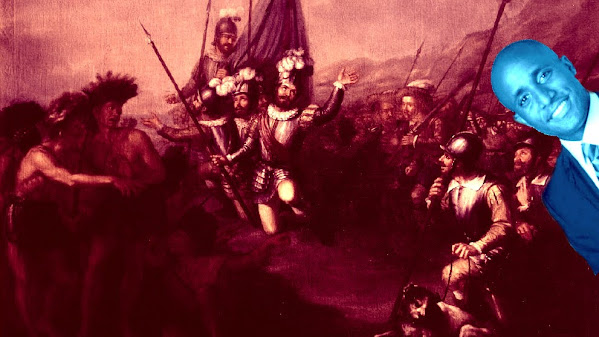 Of course we're being silly . . . What's worse is that an adult with an Ivy League education and a bright future in Democratic Party politics is echoing the questionable talking points of a 3rd rate newspaper.

“This is a backwards colonial system that undermines the voices of Kansas Citians, particularly minority voices, because there aren't many cities where a lot of minorities get elected,” he said Friday . . . “And I think that this is a sign, again, of how the state tries to subjugate the people of Kansas City.”

It’s a system that Lucas doesn’t think will change under a Republican-controlled state legislature, but rather will require legal action.

“There is certainly no evidence to suggest that we're a heck of a lot safer by having a state control system and a board that is less responsive to the issues of this community, than what you'd have in Grandview or Grain Valley, or anything around us,” he said.

Let's not forget that Mayor Q lost a major court fight with police on the topic of cash & governance in 2020.

This year he talked a big game but compromised to give the police more cash behind the scenes.

We notice his efforts to walk a political tightrope and direct his comments against the Missouri GOP rather than risk angering local police at the outset of what seems to be ANOTHER DEADLY YEAR FOR KANSAS CITY.

As Kansas City launches its search for a new police chief, Mayor Quinton Lucas remains critical of state control over the police department, calling it a racist system. "This is a backwards colonial system that undermines the voices of Kansas Citians, particularly minority voices, because there aren't many cities where a lot of minorities get elected," he said Friday on KCUR's Up to Date.