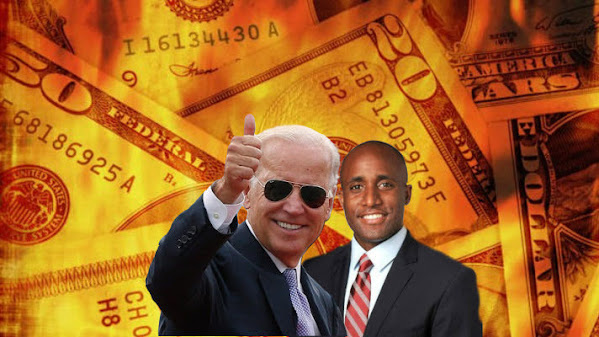 Under the rule of the Biden White House, Americans are suffering the worst economy this nation has witnessed since Prez Jimmy Carter's 70s era FAIL.

Billy Carter's antics were good-natured and clever whereas Hunter Biden is a dangerous human monster. Moreover, pundits debated the leadership ability of former Prez Carter but there's not a soul who ever honestly questioned his honor, integrity and faith . . . Whereas most of us merely wonder if a younger Prez Biden really did beat up Cornpop.

THE NATION CONFRONTS RECESSION AS KANSAS CITY WORKS DILIGENTLY TO RAISE TAXES AHEAD OF ECONOMIC DEVASTATION AND WITHOUT REGARD FOR THE FINANCIAL FATE OF VOTERS!!!

Consider what we learned this week . . .

Jackson County is working on a plan to spike property taxes yet again. And the Executive would rather talk about his baseball career than answer tough questions on this topic.

Pushing more taxes in this economy is a callous tactic and what makes it worse are the veiled threats that often accompany these cash demands.

Tax supporters are getting ready to gaslight voters and tell us that raising taxes will actually save money in the long run. In the meantime, we haven't seen any real effort to control spending from local government. Instead, elected leaders seemingly demand more cash to subsidize an endless array of giveaways in the name of "social justice" and with a great deal of resentment for people who are picking up the tab.

Prepare for a recession this summer, a bear market in real estate and a drop in stock prices, warns strategist David Rosenberg

Inflation has turned out to be not-so-transitory, and the Federal Reserve has its knives out. Well, its hammer, anyway. Raising interest rates - the U.S. central bank's primary tool to restrain runaway prices - is a blunt instrument, at best, and until now, Fed Chairman Jerome Powell has been reluctant to reach for it, let alone use it.

The probability of recession in the U.S. was raised to 33% in the next 12 months, up 10 percentage points from the Feb. 1 survey.

It's been a year full of worries for investors, from geopolitical conflict to inflation to the pandemic, and it doesn't look like the concerns will ease anytime soon.


The Fed needs to hike rates to at least 5% or risk bringing stagflation and recession on the US economy, Larry Summers says

The Federal Reserve needs to hike interest rates to 5% to avoid stagflation and recession, Larry Summers says. The Fed "needs to take far stronger action to support price stability than appears likely," Summers wrote in an op-ed. The Fed needs to abandon its thinking on inflation, according to Summers.

Goldman Sachs economists warned the probability of the U.S. economy plunging into a recession in the next year has risen dramatically in the wake of the Russia-Ukraine war. The economists, led by Jan Hatzius, cut their forecast for economic growth this year to 1.75% from 2.0% and noted that such an outlook means there is a "higher risk" of about 20% to 35% that the U.S.

Despite the uncertainty posed by the Ukrainian war, the Federal Reserve Chair Jerome Powell said Tuesday that the U.S. economy was strong enough to withstand interest rate hikes without slipping into a recession.