Last night, following a day of critics and conservatives dunking on her, Kansas City's perennial homecoming queen lamented life in the spotlight . . . 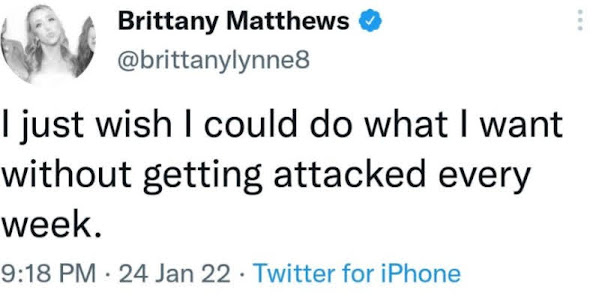 JASON KANDER RUSHED TO THE RESCUE OF BRITTANY MATTHEWS IN DEFENSE OF HER CHAMPAGNE SPLASHING!!! We commend his bravery for stepping into the line of fire of keyboard warriors but the reality is that the damage has been done.

We talked about this throughout the season and now it's news fact . . .

Brittany Matthews, Jackson Mahomes have turned the internet against the Chiefs

Chiefs Kingdom may be the only fanbase lauding Brittany Matthews' postgame theatrics. After Kansas City's 42-36 overtime victory against Buffalo on Sunday, NFL fans quickly threw their support to the Bengals ahead of next week's AFC Championship game.