A deadly late night cutting leaves a victim dead and another early morning murder marks an important moment in this town's history.

This count is unofficial but we've been following the murder stats for nearly two decades and this is the worst level of violence that we've seen within that time.

Something else to consider . . .

Newbies might want to make excuses for this deadly crime wave . . . Some of the ignorance and misinformation we've seen online is truly remarkable and offers a scathing indictment of the public education system . . . Aside from blaming Missouri gun laws in a partisan gambit, we've noticed locals trying to make an arguement that the homicide spike is a result of population growth . . . That's absolutely FALSE. While Kansas City recently earned its highest population number ever at 508,000 counted in 2020; our journalist cheerleaders don't often mention that in 1970 the population of Kansas City, Missouri was an impressive 507,000 according to the US census. During that year the homicide count was 134. The murder number fell along with population but this time around there doesn't seem to be much hope of that phenomena repeating.

The year before that there were 151 homicides.

In 2017 KCMO endured another uptick with 151 murders recorded.

As we discussed earlier this week, the 2nd most violent year in KCMO was 1993 with 153 homicides documented.

And just now we passed that number and, unofficially, stand at 154 homicides following the latest police reports.

Kansas City suffers historic violence unseen since the crack & gang epidemic of the 1990s. Or the urban exodus in the 1970s that defined a decade of recession, inflation & malaise but also inspired some of TKC's favorite jazz, funk, rock, soul fusion music.

More importantly as we move forward . . .

This historic murder spike occurs not only in the shadow of the pandemic but also as progressive leaders like Mayor Quinton Lucas and Jackson County Prosecutor Jean Peters Baker have relentlessly attacked Kansas City police in a highly politicized, divisive and dangerously distracting battle over money and power

Tragically, fighting over budgets, accountability, equity and "local control" amid a cultural shift might incite support from activists and many voters . . . Meanwhile, the homicide count continues to rise with little hope of a solution. 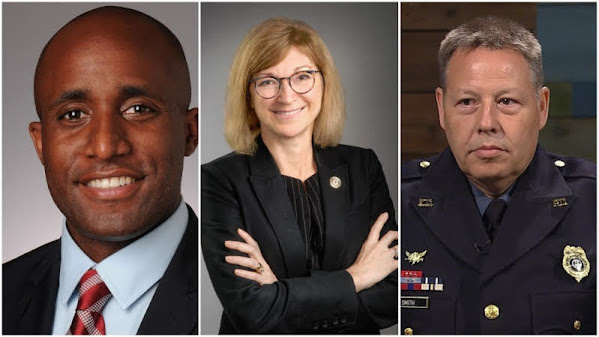 And so, we take a look at the first report of the latest local murder and pray that locals find some level of peace at Christmas approaches . . .

Just after 11pm officers were dispatched to the 2700 block of E Linwood on what was originally reported as a prowler call.

When officers arrived they were told there was an outside disturbance which led to an altercation outside the front of the apartment building between the victim (adult male) and an unknown suspect.

Preliminary investigation indicates at some point during the altercation the victim was cut or otherwise injured. The suspect then left the scene on foot.

Officers rendered aid to the victim and summoned EMS to the scene who transported the victim to the hospital where he was declared deceased.

Detectives are talking to people who were at the scene when officers arrived and canvassing the area for any witnesses.  Crime scene investigators are processing the scene for any evidence.

If anyone has any information or saw anything here tonight they are asked to contact the Homicide Unit directly at 816-234-5043 or the TIPS hotline anonymously at 816-474-TIPS, There is a reward of up to $25,000 for information leading to an arrest in this case.

At 4 AM KCPD reported a gunfire death that now pushes the KCMO killing count to a historic level.

Police are on the scene of a fatal shooting in the 6800 block of NE Ridgeway Ave.

This morning about 2:45am officers were dispatched to the 6800 block of NE Ridgeway Ave on a shooting call.

On arrival they located the victim, an adult male, who had been shot. Officers summoned EMS who transported the victim to the hospital where he was declared deceased.

People at the scene told officers that a disturbance occurred in the front yard of a residence between two men. At some point during that disturbance the victim was shot.  The suspect left the scene at that point.

Officers were led to that person of interest a few blocks away where he was taken into custody for further investigation.

Detectives are continuing their investigation this morning and Crime Scene Investigators are processing the scene for evidence at this time.

Again, unofficially, this is homicide #154 and the 2nd deadliest year in KCMO history.

The Kansas City, Missouri Police Department is investigating an early morning shooting that witnesses said started with a fight.Officers were called to a home in the 6800 block of Northeast Ridgeway Avenue around 2:45 a.m. Thursday to investigate a shooting.When they arrived, officers found a man suffering from an apparent gunshot wound.

KANSAS CITY, Mo. - Kansas City, Missouri, police are investigating a homicide near Linwood Boulevard and Prospect Avenue. Just after 11 p.m. Wednesday, officers were called to the area on what was originally reported as a prowler call. When officers arrived, they were told there was an outside disturbance that led to an altercation between a man and an unknown suspect.

KANSAS CITY, MO (KCTV) -- A couple of overnight homicides in Kansas City on Thursday morning put the city over the top for its second deadliest year on record, trailing only last year. Officers responded just after 11 p.m. Wednesday to an apartment on Linwood Boulevard at Montgall Avenue in reference to a prowler.