So far Kansas City has been spared from ORGANIZED LOOTING that has rocked the nation at the outset of the holiday season.

But that trend isn't likely to hold up.

The answer, of course, is no.

Sadly, this isn't a problem that doesn't impact our suburban friends.

Here's how this threatens to play out in the metro . . .

Kansas City police have fewer resources to investigate organized shoplifting gangs. Those crooks are then free to venture to suburban enclaves and grab armfuls of loot. Crime displacement has been a longstanding problem for years but now THE VERY REAL DECLINE IN POLICE OFFICERS just might hamper the efforts to crackdown on local bandits.

Police have taken a rhetorical beating from the newspaper and many activists for any action against criminals during a chase . . . Of course we believe that authorities will do their job, but the impact of anti-police rhetoric can undoubtedly cause EVERYONE to second guess any response against criminals from law enforcement.

Let's not forget the Plaza Riots of 2020 which forced so many merchants to shutter their windows amid constant threats during a so-called social justice uprising. 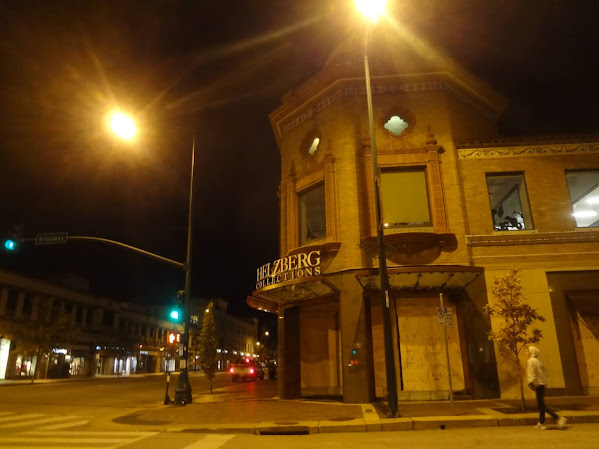 Critics of our TKC BLOGGY GOODNESS might suggest that this report is all "fear mongering" but, IN FACT, we've seen SMASH & GRAB LOOTING ORGANIZED BY SOCIAL MEDIA across the nation. It's simply a matter of time before the Kansas City metro is hit by this violent & terrifying trend.

And when it happens, our police force will bravely confront the problem, but with fewer officers and nothing but criticism from the newspaper and KCMO political leadership.

The smash-and-grab robberies plaguing San Francisco and Los Angeles spread to smaller cities in the state and across the country to Chicago and Minneapolis over the holiday weekend, with organized "flash mobs" ransacking stores and making off with merchandise worth thousands.

A spree of brazen "smash-and-grab" crimes has plagued upscale stores in San Francisco, Los Angeles and other cities, with mobs of thieves making off with luxury goods to resell.

Those interviewed, including a professor of criminal justice and ex-cop, say the spate of robberies should be referred to as 'organized smash and grabs' The distinction originates from the California penal code, which defines looting as 'theft or burglary...during a 'state of emergency' 'Looting is a term that we typically


New wave of smash-and-grab robberies has retailers, shoppers on edge

A series of coordinated smash and grab burglaries happening in the Bay Area has shoppers and retail employees on edge. The Morning Joe panel discusses.


Why are flash mobs looting stores? Because today's America gave them the go-ahead | Opinion

OPINION AND COMMENTARY Why would they do this? That question rises inevitably from a new wave of so-called flash-mob robberies, thieves by the dozens invading retail stores to simply take what they want. It's happened in California, Illinois, Minnesota and Maryland. Retailers ranging from Nordstrom to 7-Eleven have been hit.