There was no victory today for Kansas City Mayor Quinton Lucas, COVID-19 mitigation or science.

Instead, feeble rules imposed on a defiant populace offer a false sense of security.

For the record, TKC endorses the use of masks to help stop the spread of the pandemic. Amateur scientists from both sides of the aisle can debate the practice but we believe that they're better than nothing. History shows us that staying away from people as much as possible is likely the best defense against plague but, essentially, masks are harmless. Sure, wearing a flimsy cloth face covering might be akin to bringing a spork to a gun fight but we'd rather have the spork than walk into a conflict completely unarmed; especially in a world where so many reactionaries refuse a vaccine that former Prez Trump fast-tracked.

And so, here's the question that nobody in Kansas City is asking upon this cowtown triumph for masks/science . . .

HOW EFFECTIVE IS IT TO IMPOSE MASKS ON PEOPLE WHO DON'T WANT TO WEAR THEM?!?!

In the photo featured at the top of this post, Mayor Q dropped his mask in order to yell with "mostly peaceful" protesters at the outset of the pandemic.

Later, as the pandemic worsened, Mayor Q was seen unmasked in the close company of a gaggle of very happy ladies. 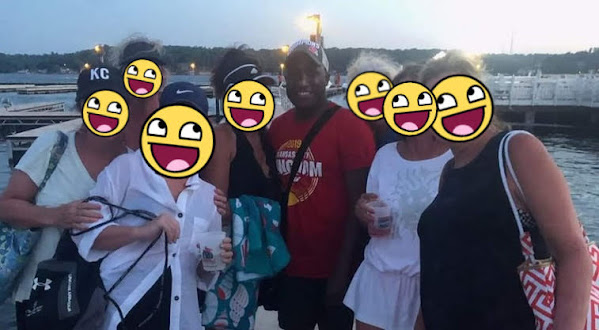 Moreover, we've all seen countless people walk around this town wearing masks on their chin like some kind of idiotic bib.

At every step of this pandemic, the U.S. obsession with the bitter debate over masks to help mitigate COVID has been a puerile and insipid argument that only helps to boost the ratings of cable TV news.

Because he's not a real leader, Mayor Quinton Lucas missed his opportunity to enact policy that sidestepped unproductive Beltway politics.

A Kansas City COVID Mask Protection Policy would've preserved the rights of people and small biz who sought to wear masks in order try and thwart this horrific plague.

Instead of trusting the people of Kansas City to act like adults and respecting personal freedom, Mayor Quinton Lucas put his faith in flimsy and mostly ignored public health rules whilst ordering everyone to feign obedience as he championed a divisive dress code.

Real leaders don't give orders, they lead by example and seek cooperation.

Real leaders don't chase celebrity and rush toward the spotlight at every opportunity.

The Mayor passed his dress code today, but for many, he lost a great deal of credibility.

KANSAS CITY, MO (KCTV) -- The KCMO City Council has voted to extend the city's mask mandate until Sept. 23. It passed by a 10-2 vote. Heather Hall and Brandon Ellington voted against it. This comes after a heated night of debate on Wednesday.

KANSAS CITY, Mo. - The Kansas City Council has voted 10-2 Thursday to extend the city's indoor mask mandate through Sept. 23. Council members Heather Hall and Brandon Ellington were the only two to vote against the mask ordinance. See the council's discussion and vote in the video player above.

The Kansas City Council voted 10-2 Thursday to extend its indoor mask order to September 23, as COVID hospitalizations and deaths mount and the delta variant remains highly contagious. "We have not kept this virus at bay," said Councilwoman Andrea Bough, noting her frustration that vaccine hesitancy has allowed the virus to proliferate.