In the aftermath of camps cleared out of Westport on Sunday we notice homeless on the move and looking for a new Kansas City location to reside/squat.

Westport camp denizens have now taken up space in Penn Valley Park and we've heard that Independence Ave. is enduring a "deluge" of disenfranchised new residents in public right of ways, adding to already crowded spaces. 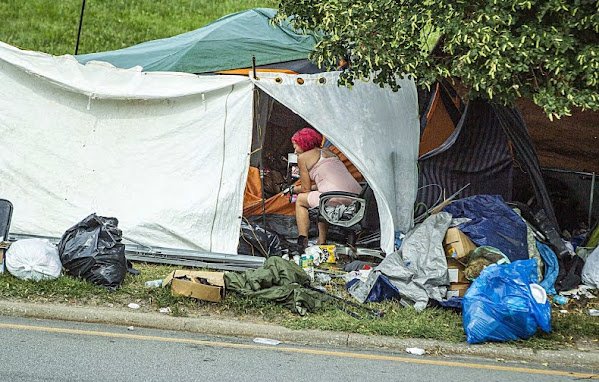 And so in order to expose "root causes" that led up to this crisis and to counter claims of "success" by Mayor Q, we share a bit of wisdom from a Kansas City Insider on Sunday.

"Mayor Quinton Lucas created this situation. He spend MILLIONS to cater to the homeless and negotiated with them directly rather than listening to neighborhoods, stakeholders and voters about this problem. The influx of homeless that we've seen directly correlates to the benefits and services he has offered. Of course this is an ongoing problem but the numbers have never been this bad, even during times of similar economic hardship. The connection is obvious. The 'generosity' that Mayor Lucas has shown the homeless has done nothing more than bolster their numbers and worsen the problem."

Sadly, there hasn't been much political benefit for the Mayor . . .

"He is the most unpopular Mayor we've had in years."

TKC was surprised by that statement because we thought that honor belonged to Mark Funkhouser.

"He's not going to pick up any votes in the Northland. Northeast and the Westside have turned on him. His Midtown support is nominal and voters who really know South KC have seen the decline of  his influence. I'm doubtful that he will be able to turn out enough East side voters to stay in power now that his track record has proven so horrible."

Back to the homeless problem . . .

"He decided that he's going to be a mayor for the homeless and that's a mistake from which he cannot recover. Clearing out a few people today doesn't erase the damage that has been done. Today he's merely sweeping the problem under the rug . . . It's not going to work."

There's more news on this story that continues to evolve and as homeless retreat to new locations across the metro.