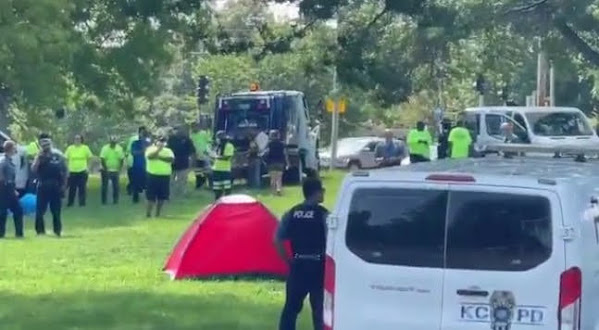 After complaint from local biz and residents, the return of a Kansas City homeless protest site was shut down just moments ago.

Here's a peek at the event and a realization that Mayor Q "negotiating" with activists was mostly a waste of time . . .

KCMO trucks and police at Southwest Trfwy and Westport Rd. One person tells me that they are making them throw away anything they can’t carry away. @KSHB41 pic.twitter.com/7O90wfDJ8M

The Kansas City Public Works Department announced Sunday a citywide effort focused on litter, improper storage and tenting in the public right of way. In a news release, the city said the goal is to clean up trash and litter and to ensure safety for all in busy intersections, public streets and spaces.

KANSAS CITY, Mo. - Crews from Kansas City Public Works cleared a homeless camp near Westport on Sunday, as part of a city-wide litter clean up. KCMO trucks and police at Southwest Trfwy and Westport Rd. One person tells me that they are making them throw away anything they can't carry away.

Kansas City Public Works officials on Sunday removed more than a dozen homeless people who were camped in a median on Westport Road, citing safety and promising further services. The people living at "Camp Sixx," named in honor of Scott "Sixx" Eicke, a homeless man who died on New Year's Day, were put on a city bus by Kansas City Police and moved to Penn Valley Park.