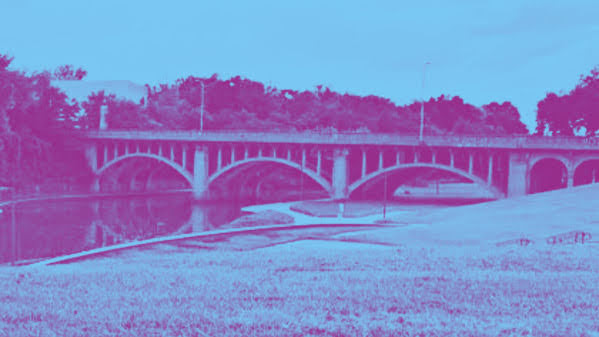 Here's the LATEST UPDATE after a scary incident near Brush Creek that didn't involve racist fishes.

This afternoon officers responded to a series of several domestic violence disturbance calls.  A female caller was involved in a disturbance with a male reported to be armed with a gun.

Officers responded at least two times to a residence in the 3700 block of E. 47th St. in regard to these disturbances.

At approximately 6:20 PM officers were called an additional time to the corner of Cleaver II and Cleveland in regard to the same disturbing male who had returned.

As officers arrived on the scene prior to exiting their vehicle the male described as being involved in the disturbance immediately ran from the scene towards Brush Creek.

Officers exited their vehicle and chased the individual on foot and observed him jump into the creek.

He swam a short distance out into the water and began having distress.  One of the officers took off his duty gear and entered the water in an attempt to rescue the individual.

The officer last saw the individual in the middle of the creek and he was unable to reach him prior to him going underwater.

Officers summoned KCFD who brought their water rescue team to the area and they are conducting rescue operations at this time.

Detectives are in contact with the original caller and investigating what crimes may have taken place this afternoon.

Emergency crews have located the body Friday morning of the man who jumped into the water in an attempt to get away from police officers and did not resurface, Kansas City police said.Authorities said they received at least two phone calls starting about 2 p.m.