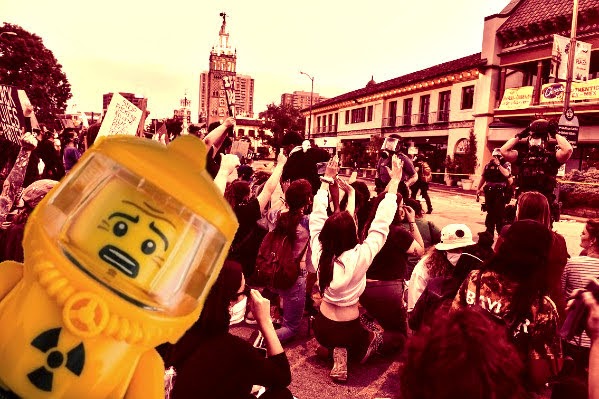 Over the past week Kansas City witnessed activists in support of Palestine dominate the Country Club Plaza with protests and vigils.

Dutifully buried by local MSM . . . Pro-Palestine supporters ripped the flag of Israel down from a Kansas City display dedicated to peace and understanding.

"You won't see any pro-Israel events in KC public spaces because this past year has taught us that Antifa and BLM can operate with impunity and without consequences. This new faction of violent protesters pose a very real risk to anyone who opposes them. Last year they burned a police cruiser and a TV news SUV yet their demonstrations were described as "mostly peaceful" by the media and supported by many elected leaders. Obviously, putting supporters of Israel in physical danger doesn't make sense . . . What's worse is that the threat of reprisal has sparked silence in what can only be described as tacit antisemitism"

From the Jewish Federation Of Kansas City . . .

"Israel has been under relentless rocket attacks from terrorist groups in the Gaza Strip that have caused extensive damage, injuries and loss of life. Join us for a virtual presentation followed by a question-and-answer session."

Conflict in Israel: Why is this happening, and what might the future hold?
The context, the politics and the strategy
12 p.m. | Thursday, May 20

Actions you can take today:

Urge Members of Congress to stand with Israel

Contribute to our Israel emergency relief fund
(emergency grants to victims and their families, psychological counseling to those affected, and support for first responders)

Israel unleashes airstrikes after vowing to press on in Gaza

GAZA CITY, Gaza Strip (AP) - Israel unleashed a wave of airstrikes across the Gaza Strip early Thursday, killing at least one Palestinian and wounding several others. The latest strikes came after Prime Minister Benjamin Netanyahu pushed back against U.S. pressure to wind down the offensive against Gaza's militant Hamas rulers, who have fired thousands of rockets at Israel.

Sen. Bernie Sanders (I-Vt.) is preparing to introduce a resolution on Thursday disapproving of the U.S. sale of $735 million in precision-guided weapons to Israel, according to a draft obtained by The Washington Post.

Social media giant Facebook took down a pro- Israel page last week after it was allegedly targeted by radical Islamists amid ongoing unrest in the Gaza Strip. The Jerusalem Prayer Team (JPT) page, which has tens of millions of followers, was reportedly shut down on Friday after it was flooded with comments from people who allegedly wanted it taken offline.

There's a story Joe Biden likes to tell any time he speaks to an audience about Israel. It's 1948, a matter of days before Israel's founding and three years after the end of World War II.


Can Biden walk the line between support for both Israel and Palestine?

For decades, the U.S. has supported Israel, backing up its defense policy and supplying tens of billions of dollars in aid and weapons. Now, some within the Democratic party are questioning that support, and challenging President Biden's handling of the Gaza conflict.

Several major progressive groups aligned with Democrats are siding squarely with the Palestinians over Israel in the current conflict, denouncing Israeli actions in harsh terms and urging President Biden to force the U.S. ally to stop its campaign against Hamas.


Opinion | An Arab mob looted my hotel. Now my Arab neighbors are helping me rebuild.

ACRE, Israel - In my early 50s, nearly 30 years after I moved to Israel from Ohio, I bought the home of no one's dreams: a dilapidated 300-year-old Ottoman ruin in the ancient Mediterrean city of Acre filled with an entire neighborhood's junk and two live horses.

"This violence cannot be justified by anything. Israel has the right to defend itself against these attacks within the framework of self-defense," German government spokesman Steffen Seibert said on Friday, denouncing the actions of Hamas in light of the massive rocket fire on Israel. Seibert speaks for the German chancellor.