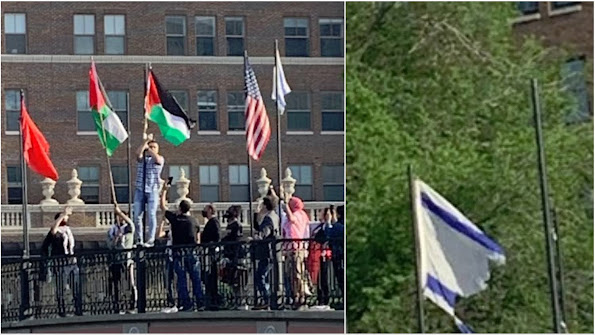 As fighting escalates in the Holy Land, this weekend protesters in support of Palestine marched on the streets of Kansas City's prestigious Country Club Plaza entertainment district and concluded their rally by desecrating the flag of their adversaries.

The “Kansas City Sister Cities International Bridge” brings recognition to a group that promotes international understanding by creating special connections between cities, states and counties all over the world.  More than 2,000 cities, states and counties participate through groups in their own cities. The main headquarters is in Washington, D.C. The program began after 1956 following then President Dwight Eisenhower’s  promotion of peace and understanding between citizens of all countries by creating an organization to create bonds between them calling it “citizen diplomacy”.

A note from the AP:

Buried in the coverage but highlighted in our headline, with pix and this passage was a telling act of vandalism that mired the event . . .

"At Brush Creek in Kansas City on Saturday, protesters tore down the Israeli flag from a post alongside Ward Parkway. They hung a Palestinian flag next to the American flag along the road and continued their march through the district."