How To Celebrate May Day In Kansas City?!? 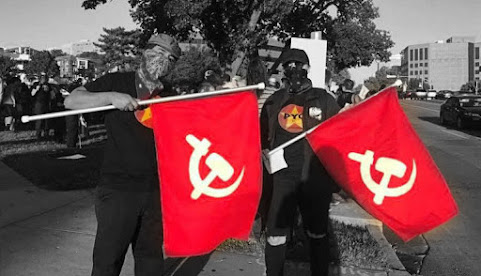 Across the world there have been violent confrontations with police on this activist holiday that's often overlooked in the United States.

Background for those who don't know or don't want others to know about the origins of the modern "celebration" of the working-class . . .

Quite a few locals don't know that there's an vibrant communist community at work in activist circles in Kansas City. Over the years the group has divided into quite a few factions and most of their fighting is with each other.

However, one of them did punch a police horse at the outset of the Prez Trump presidency.

As of this writing, thankfully, there hasn't been any violent commie protest in KCMO. In fact the Democratic Socialists in Kansas City are taking a very mainstream approach and commemorating May Day by encouraging Prez Biden to move forward on changes to labor law via social media.

Meanwhile, here's a look at how the holiday is playing out around the world . . .

In countries that mark May 1 as International Labor Day, the annual celebration of workers' rights produced a rare sight during the pandemic: large and closely packed crowds, with marchers striding shoulder-to-shoulder with clenched fists behind banners. In Turkey and the Philippines, police prevented the May Day protests, enforcing virus lockdowns and making hundreds of arrests.

Workers and union leaders dusted off bullhorns and flags that had stayed furled during coronavirus lockdowns for slimmed down but still boisterous - and at times violent - May Day marches on Saturday. The protesters demanded more labor protections amid a pandemic that has turned economies and workplaces upside down.

Pandemic and economic crisis dampen May Day in Cuba

For a second consecutive year Communist-run Cuba canceled its emblematic May Day march though Havana's Plaza de la Revolution Square on Saturday as it battles a surge in COVID-19 cases and a scarcity of basic goods.

President Biden Joe Biden Will Seattle officials use the same lawsuit defense they want to take away from police? Taliban warns of attacks on US troops after withdrawal deadline under Trump deal passes Pandemic inspector general blasts DOJ memo, urges Congress to clarify mandate MORE on Wednesday called for the passage of the PRO Act and for a $15 federal minimum wage during his first address before a joint session of Congress.

Protesters in Berlin threw bottles, firecrackers and stones at police during May Day marches in the Neukölln neighborhood of the German capital. According police tallies, 5,000 people took part in the rally, while organizers put the turnout closer to 20,000. Police took several demonstrators into custody.

Today is May Day. Since 2007, I have advocated using this date as an international Victims of Communism Day.