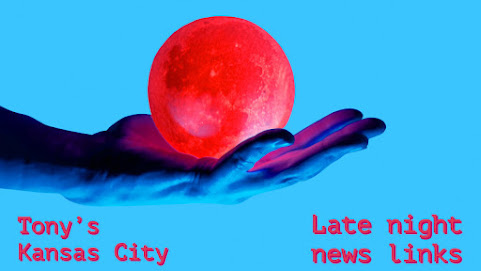 For our late night denizens, a glimpse at pop culture, community news and top headlines . . .

As demand for the COVID-19 vaccine has started to fall off, there are more efforts to get the shot out into the community.On Monday, Kansas City's VA Medical Center took its mobile clinic to the Veterans Community Project on Troost Avenue.The VA is holding regular clinics to get more veterans vaccinated.

Gov. Laura Kelly has signed a bipartisan bill to give the GOP-controlled Kansas Legislature more oversight of the modernization of the state's troubled unemployment system. The bill Kelly signed on Monday will require the Kansas Department of Labor to complete computer upgrades by the end of 2022.

President Joe Biden campaigned on "unity." In his inaugural address, he uttered the word at least eight times. As the administration approaches its 100thday, self-described Democratic socialist Rep. Alexandria Ocasio-Cortez (D-N.Y.) is touting the president's "progressive" credentials. Ocasio-Cortez said Friday that she and other expected Biden to be "a lot more conservatives," adding that Biden has "exceeded expectations that progressives had."

A new feature is being introduced to iPhones and iPads this week which is causing a huge rift between Apple and Facebook. It will allow device users to say no to having their data collected by apps.

The Biden administration is refusing to weigh in on the Iranian foreign minister claiming in a leaked recording that former Secretary of State and current Special Presidential Envoy for Climate John Kerry told him about secret Israeli operations being carried out in Syria. In response, Sen.

The Supreme Court announced on Monday that it will hear New York State Rifle & Pistol Association Inc. v. Corlett , a case that could transform the judiciary's understanding of the Second Amendment and lay waste to many of the nation's gun laws.

Last night's 93rd Academy Awards saw Netflix walk away with the most hardware overall, but the Disney empire took the big prizes with wins for Best Picture and Best Animated Film. Those and trophies better shine pretty bright because for ABC, Sunday's Oscars were an expected ratings washout.


Look Up In About An Hour

KANSAS CITY, Mo. - Yes, it's only April. Absurdly early to get excited about the prospects for any team in Major League Baseball. "With the nice weather and the way the team's playing, in the reduced capacity, it's really turned it into a pretty hot ticket right now," said Jason Durbin with Tickets for Less.

Windy, warm for your Tuesday

Hide Transcript Show Transcript THAT WIND ADVISOR UNTIL 8 O'CLOCK TONIGHT, THE WINDS WILL DIE DOWN SLOWLY, BUT SURELY BUT STILL COMING IN FROM THE WARMER WEATHER DIRECTION A SOUTH WIND AND OUR TEMPERATURES REALLY STAY UP 81 DEGREES EVEN AT SEVEN O'CLOCK AFTER THE SUN GOES DOWN EVEN AT 9PM.