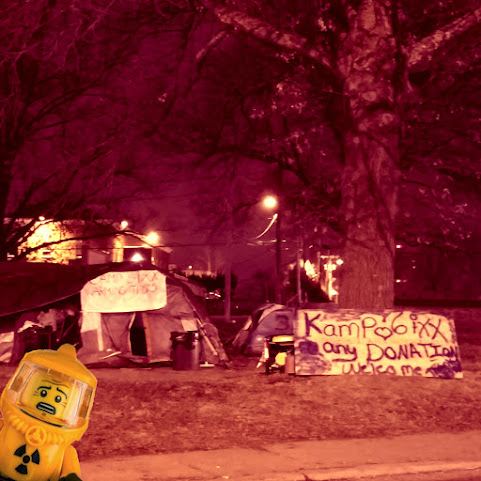 For late night denizens of our blog community we share news that authorities have heard the complaints of nearby residents and merchants and now offer ample warning to Kansas City homeless denizens camping out on public property.

Let's not forget that this protest has been ongoing for WEEKS and neighborhood outcry is reaching a boiling point.

Meanwhile, the KC Homeless union has attempted to latch on to progress from KC Tenants and Fight For $15 (Stand Up KC) activists.

Sadly, those groups are funded by national political interests and local homeless don't have that luxury.

A couple of passages that stand out from tonight's news . . .

"Some local shelters have even relaxed their entry requirements to allow more people to qualify for a bed, and for other services."

City officials released a statement Saturday saying that this encampment needs to be dissolved. Saying, “the situation has moved beyond that of a protest and has become a public health and safety issue.”

The statement details the conditions at the City Hall encampment. They include the confiscation of weapons including a firearm, property damage, etc . . .

And, as is our tradition, all of this inspires our playlist for tonight . . .