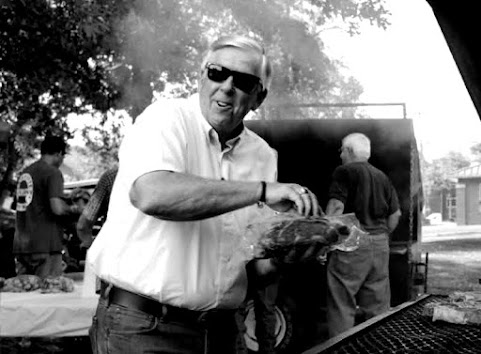 On the topic of guns, butter and pandemic politics . . .

Last year our progressive friends accused the Guv of spreading plague whilst grilling steaks at a cookout. Even worse, Missouri Democrats and their Kansas City counterparts seemed to gloat when the Guv & his wife caught COVID. The punchline was that even with Prez Trump playing boogeyman, the Show-Me State GOP CRUSHED MISSOURI DEMOCRATS and defeated every statewide candidate by an EPIC margin. We can't repeat this enough because it's a local fact of life and political reality that's often ignored by our pals who watch too much cable TV news and lose their sense of place.

Accordingly, we notice our local Democratic Party friends repeatedly lashing out at the Guv who might, once again, have the last laugh.

AP: Pandemic hasn’t been as bad as expected to Missouri finances

Don't get it twisted, we're not a fan of the Guv or any politico for that matter.

However, we do think it's funny that he keeps tricking Mayor Q into talk of cooperation with his friendly Missouri twang and then invariably double-crosses the young politico by endorsing legislation targeting progressive KCMO policies.

Also . . . As of today COVID has killed 8,752 people in Missouri so you'll forgive us if we don't pass out party favors.

Here's a somewhat objective view of Guv Parson's greatest hits in the time of plague . . .

In the final analysis, what we notice is that Missouri voters are endorsing Guv Parson's low key style of leadership whilst social media outrage, hyperbole and vitriol hasn't been effective in swaying voters.

If Missouri Democrats and progressives are going to advance their policy goals . . . They might want to try talking to people about issues rather than attempting to shame voters, feign outrage and champion public hysterics in the name of identity politics.

Parsons has done great job. We just need to compare him to Cuomo of New York and Whitmer of Michigan.

Mike "Grill & Kill" Parson. Missouri is a Flying J truck stop compared to NY. New York is the Empire State, where Missouri is the Sho Me State? Low Key is code for no management skills. How hard is it to be Sheriff in Bolivar Missouri, Pretty Boy Floyd's been dead 80 years.

Except for the two "woke broke" shittys, I appreciate living in Missouri.

Lucky to have a gov who doesn't need to flaunt his power like the dims.

And you are sitting around with your dick in your hand on a cut and paste blog,whiner!

As compared to chyna flu joe who’s killed over 130,000 in just seven short weeks. The governor has done an outstanding job in Missouri, y'all need to remember one thing..... shitty Louis, they alone had over 65% of the cases and deaths for the entire state. Nothing you can do about a liberal third world black murder infested shithole city. Besides them and killa shitty,both dimwit run, Everybody else did great, imagine that.

The following should tell you all you need to know about the Pfizer and Moderna "vaccines".

If I get vaccinated….

Can I stop wearing the mask?
Government: No

Can the restaurants, pubs, bars, etc. reopen and everyone work normally?
Government: No

Am I resistant to covid?
Government: Maybe, but we don’t know for sure…..meaning NO

At least I am no longer contagious to others?
Government: No, you can still pass it on, possibly, no one knows.

If we vaccinate all children, will school go on as normal?
Government: No

If I am vaccinated, can I stop social dissociation?
Government: No

If I am vaccinated, can I stop disinfecting my hands?
Government No

If I vaccinate myself and my grandpa, can we hug?
Government: No

Will movie theaters, theaters and stadiums reopen thanks to vaccines?
Government: No

May the vaccinated be able to gather [events; parties, weddings etc].
Government: No

What is the real benefit of vaccination?
Government: The virus will not kill you.

Are you sure it won’t kill me?
Government: No

If statistically the virus won’t kill me anyway…. Why should I get vaccinated?
Government: To protect others.

So if I get vaccinated, others are 100% sure I won’t infect them?
Government: No, we are not sure.

Government: No, we passed a law holding the manufacturers harmless from ANY deleterious effects from the virus.

Lying liberal scum killed so many with this hoax.