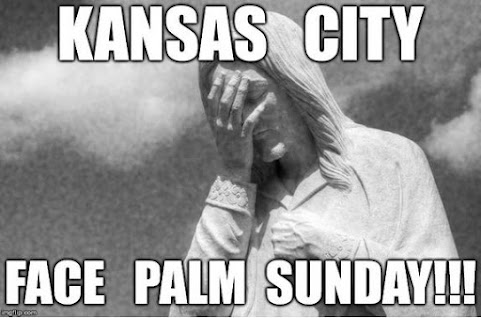 This morning starts Holy Week for many of the local faithful as we renew our commitment to snark, pop culture and top headlines.

Tide is Hi The Collective EX building in the Crossroads has had a number of tenants pass through. Built to be a collaborative space for designers, the Collective building supplies creators with materials and encouragement... and coffee. When established roaster Thou Mayest moved out of the cafe space located in the building, HITIDES Coffee owners Michele and Johnny Dawbarn saw...

HyVee, KCPD and Harvesters team up for ham dinner giveaway

Friday evening the Kansas City Missouri Police Department partnered with Hy-Vee food stores and the Harvesters Food Network to sponsor a free, drive through ham dinner giveaway at KCPD's East Patrol Campus located at 27th and Prospect. Prior to the event cars were lined up around the block waiting to get in and take advantage of the free offer.

Miley Cyrus has been the talk of Hollywood this week as the pop star went viral after penning an emotional tribute to "Hannah Montana" on the 15-year anniversary of the show's debut. She celebrated the milestone in public Thursday as photos surfaced showing the 28-year-old letting loose at a bar.

The push to free the container ship stuck in the Suez Canal continued into a fifth day Saturday as more than 300 ships on either side wait to pass through the blockage. Efforts to refloat the Ever Given made "significant progress" Friday night as the ship's rudder was freed, according to Bernhard Schulte Shipmanagement, the technical manager of the Ever Given.

Analysis: Birx shares her chilling conclusion as America arrives at a moment of introspection on the coronavirus

The US may finally be getting a handle on the coronavirus pandemic, but for so many Americans, it's too late, and that disconnect is raising fresh questions about why the US couldn't have done more earlier.

'SNL' lays into Biden for recent missteps - literal and otherwise

This weekend's "Saturday Night Live" poked fun at President Biden -- about his stumbles on the stairs leading to Air Force One and on last week's first news conference since taking office.


Tell Your Mom To Stop Posting This Story To Facebook

A stray dog kept stealing a stuffed unicorn from a Dollar General, so animal control bought it for him

The cutest thief was rewarded after he continued to steal a purple unicorn from a Dollar General.

When and how to see March's full worm moon this weekend

This year's full Worm Moon will reach peak illumination at 2:48 p.m. EDT on Sunday, March 28, 2021.Its name marks the return of earthworms to the soil, one of the first signs of spring.Scientists disagree on whether March's full moon is a supermoon or not.How have you been celebrating the first few days of spring?

For more stories like this one, subscribe to A People's History of Kansas City on Apple Podcasts, Spotify or Stitcher. The early 20th Century was a tumultuous time in Kansas City. Women's roles in the public sphere were expanding. People of color were fighting for basic liberties, and workers were demanding better conditions and pay.

Sunny Sunday ahead, warm up on the way Monday

Hide Transcript Show Transcript TO ANY PRICE INCREASE AND WE LOVE OUR IN THE MORNING KATIE, I'M NOT SURE HOW THAT WASN'T THE LEAD TO BREAKING NEWS. WE NEEDED THAT EARLY. WE NEED THE COFFEE ON THIS SHIFT FOR SURE. ALL RIGHT, WE'VE GOT A GREAT FORECAST FOR YOU TODAY.

Carrie Underwood - Jesus, Take The Wheel is the song of the day and this is the OPEN THREAD for right now.