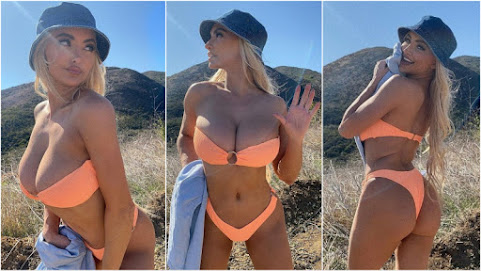 Right now we're inspired about hottie Lindey stepping up her creative game and advocacy for Insta-models which inspires us to share community news, pop culture and top headlines.

KANSAS CITY, Mo. - The smokey smell around Kansas City Tuesday morning is not from all the yummy barbecue joints around town, but from wildfires over Oklahoma, Arkansas and southern Missouri. Winds of 15-35 miles per hour are shipping the smoke and smell into the area.

For many Kansas Citians, the bouncing of an orange ball on hardwood floors will be the biggest story of the week. The Big 12 Basketball Tournament is coming to town. The men's tournament gets underway Wednesday at T-Mobile Center. The women's tournament starts Thursday at Municipal Auditorium.

KANSAS CITY, MO (KCTV) -- The federal government is pushing all states to prioritize vaccinating K-12 teachers. Kansas teachers were prioritized back in February, but Missouri still doesn't plan to open its sign ups to teachers until next week. However, teachers in any state can now get the vaccine at any federal retail pharmacy program participant, like Hy-Vee.

Lindsey Pelas isn't happy with what she sees as glaring double standards in Instagram's content management process. The social media-famous model and Eyes Up Here podcast host took to Twitter to voice her objections with the same platform that, at an earlier time, helped internet celebrities build massive followings and connect with fans.

President Biden's COVID-19 stimulus bill is on the brink of becoming law. Here's where it stands

WASHINGTON - The House of Representatives is poised this week to pass President Joe Biden's $1.9 trillion COVID-19 relief plan with $1,400 checks, billions for vaccines, and money to reopen schools. The Senate passed the bill over the week weekend after a marathon session.

An Arizona federal judge ruled Monday that the self-described "QAnon Shaman" - who garnered widespread recognition after storming the U.S. Capitol shirtless, wearing face paint, a bearskin and horned headdress on Jan. 6 - must remain jailed until his trial.

The "First Dogs" are officially in the dog house. The pet pooches of President Joe Biden and First Lady Jill Biden have been shipped back to their home in Delaware after one of them bit a White House guard, according to a report.

Buckingham Palace is facing mounting pressure to release a statement after Meghan Markle and Prince Harry's bombshell interview with Oprah Winfrey. During the televised tell-all, which aired on Sunday, the Duke and Duchess of Sussex detailed how they were allegedly mistreated by Britain's royal household, as well as "The Firm," referring to senior members of the family.

Doja Cat has released the sultry - and scary - new music video for her viral single "Streets," originally featured on her 2019 album Hot Pink. In the horror-fantasy clip, directed by Christian Breslauer, a taxi driver stares out at a mannequin while Paul Anka's "Put Your Head on My Shoulder" plays in the background.

Do you need a lawyer in the metro? This new tool can help

Lawyer Finder, a searchable online directory made by The Kansas City Metropolitan Bar Association, is now available to the public and legal community. "We created Lawyer Finder to fill an accessibility gap between the public and lawyers which widened in the pandemic's remote environment," says Sam Wendt, 2021 president of the KCMBA.

Downtowners to embrace the KC arts scene this week

The KC Downtowners will celebrate the local arts scene this Wednesday with a virtual spotlight on ArtsKC and Art in the Loop. Dana Knapp, President & CEO of ArtsKC, will deliver the keynote address at the Downtowners' March meeting on Wednesday.

Doja Cat - Streets is the song of the day and this is the OPEN THREAD for right now.