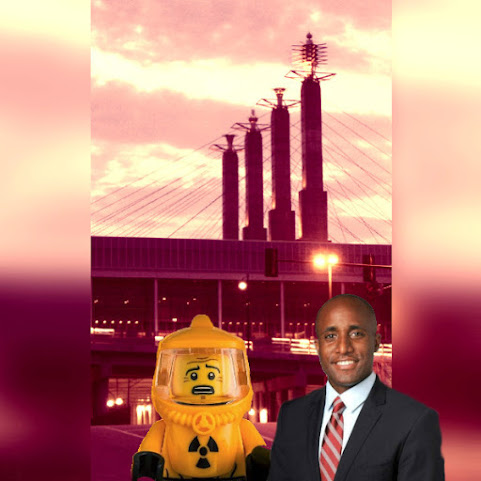 Mayor Quinton Lucas transformed the downtown Kansas City Convention Center into a life saving resource for the impoverished during the brutal, cold, COVID 2021 winter. Now, the former occupants of the facility will be directed back to local streets as the homeless crisis persists.

The budget for this project was about half a million bucks.

The effort started with controversy over anti-cop Black Panthers providing security but the Mayor deflected and refused to answer any softball questions on the topic.

To describe the Bartle Hall homeless camp as "chaotic" would be an understatement. Social media reported quite a few fights and disputes on site as police were often called to the scene.

Activists demand more resources for the local homeless given that the warming center project has concluded.

This is a collection of both activists and real life homeless folk who have established an enduring camp site at one of the busiest intersections in Midtown Kansas City.

In the past few days we've noticed more tents and better fortifications against the rain at this illicit urban bivouac. 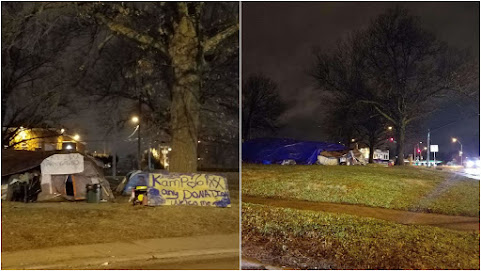 Some of the folks who occupy the camp are affiliated with the homeless "union" that has dominated recent policy conversations . . . Whilst others are just down on their luck.

What we know for sure is that, POST-COVID, the homeless and other people in need will likely return to every stop sign in KCMO to beg for cash as drivers hope the "Biden recovery" takes hold.

put the next homeless camp in pl district. kc also subsidizes that place.

And yet your idea is stupid. Weird.

So was turning Bartle into a cage match for vagrants.

And the Mayor Q Ghettoization of Westport continues as people flock to Johnson County for safe fun and a variety of hopping restaurants and bars not plagued by BLM and Antifa or vagrants pooping on the sidewalks and looking for handouts. Nice work, Mayor! Cheers!

Try using the homeless to pick up the trash.

No homie fights from Stalag 6 have made the news either.

Q: What did the visiting leprechaun find in KCMO?

A: Phallic symbols, a condom character, and a dickhead!!!

I like the mayor's free cab rides for homeless from Bartle to Westport.

Yeah clean up this trashy town.

Thanks Joe Biden for creating all of these homeless people by killing jobs with your autocratic Executive Orders.

Q: What did the visiting leprechaun find in KCMO?

A: A bunch of racists assholes who post all day on a local blog.

Why didn't they use the empty American Royal bldg? Because Q. Clueless and his clown council wanted to make it a media circus.

Westport died a long time ago, you can’t even drive around it.

TKC Quiz ! How many cans of Fabreze will be required to make Bartle Hall tolerable for ...er... humans ?

They will have to smoke bomb it.

Why do they even need warming shelters anyway? Global warming is a thing again.

Get these people another free stimulus check

1400 dollars buys quite a bit of fentanyl

Hey homeless criminals/idiots - enjoy living in the 3rd century B.C. Meanwhile, I will enjoy sleeping and goofing off in my 10,000 square foot state-of-the-art home in Leawood. I just bought a new Tesla and it is sweet! It sure is hard to spend a $5 million net worth. Those college girls on Seeking Arrangement sure drive a hard bargain.

Take a look at the south lawn of city hall. The media is not revealing the truth about that crap and urine filled mess.

Kansas City doesn't have a homeless crisis. Q invented it. Most the people in Bartle were NOT from KC. They were brought here from other cities at the request of the advocates to try to create a crisis. Throughout the cold spell, KCMO had more beds in our existing shelters than were needed or filled at Bartle. It's all a scam. Half million bucks? Try 2 million time they are done and that doesn't count the lost business in the area. Q is a liar and we are his fools.

Kansas City government will continue to actively enforce regulations around mask-wearing and social distancing, and will shut down establishments and events that are found to not be in compliance with these regulations

Yes, please take a look at this dangerous, disgusting, filthy eyesore because this is what we will have to deal with until someone at city hall grows a pair and says enough. The front door has not been in use since last year because people who actually have business could not walk into the building without being accosted by whatever group was "occupying" the grounds at any particular time. People have been seen walking around with weapons. Children are rolling around on what's left of the grass being exposed to God knows what. Gross does not even begin to describe it.

Can you believe this crap!

So nice to live in a white neighborhood in Kansas! Keep that trash where it belongs! Don't forget to pay your extra 1% tax, too!