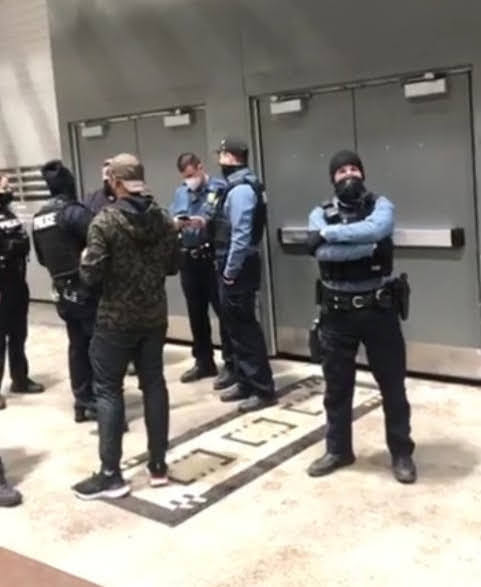 Social media allegations of alleged assault and police brutality at the Scott Eicke Warming Center are circulating widely among Kansas City activists right now. The drama unfolding is unclear amid the disorderly scene but so far the mayor's office has worked to diffuse questions about security.

Deets are scant but a 30-minute Facebook live video has garnered thousands of views and hundreds of comments with enough blame to go around for everybody.

What we can decipher is that one of the "guests" of the warming center was detained for disorderly behavior. However, the suspect told authorities that a volunteer "hit him in the mouth" in addition to other grievances with the quality of shelter provided.

The situation at the warming center now borders on outright anarchy as some activists are frustrated with law enforcement tactics whilst others argue with new residents and organizers struggle to maintain order among increasingly rowdy guests.

To be fair, working in situations where extreme poverty is rampant can be a shock to those who are unfamiliar with issues specific to this population.

However, a quick look at the scene reveals that rising tension and frustration among new inhabitants of the warming center is undeniable and so far unreported by MSM.

Anonymous said…
Mayor McDrinkerson! It looks like your latest failure is moving along well.
2/19/21, 5:39 PM

Anonymous said…
Citizen Chucklowe! It looks like your latest beef, something about which you have no reason to complain at all, is pointless as usual.
2/19/21, 6:05 PM

Tab said…
You asshats are always big tough guys until the cops show up then roll up and whine police brutality.
You pukes require more taxpayer resources than what you are worth or EVER paid in for. Just a burden on society cradle to grave.
2/19/21, 7:15 PM

Anonymous said…
Don't worry the 3rd world slave biden is letting in will soon flood the labor market lowering your wages, raising tour rent and taxes and lowering your standard of living.

Anonymous said…
Someone needs to get the videos from inside of the center. There is a bunch of it. It will show you want really goes on. Just ask for it.
2/19/21, 10:26 PM

Anonymous said…
The homeless are a drain on society. They are worthless scum who absolutely represent the filth and decay of our time. They deserve no mercy. They are degenerates who should be treated with extreme prejudice.
2/20/21, 12:44 AM

Anonymous said…
Crazy Stacy Shaw is posting her stupid sjw videos asking for money to support the Troy, the trespasser who lied about being punched. Give them too much and they think they can get away with anything, all the while screaming about 'white privilege' and 'police brutality.' GMAFB.
2/20/21, 8:43 AM

Anonymous said…
The deep freeze has passed. Time to send all the bums back to their tents or whatever and disinfect the premises.
2/20/21, 8:52 AM

Anonymous said…
Troy has managed to make the news 3 separate times in the last year. How is he always where the drama is? And always followed by Stacy Shaw. Does she even still have a law license or did she blow that last summer?
2/20/21, 11:16 AM