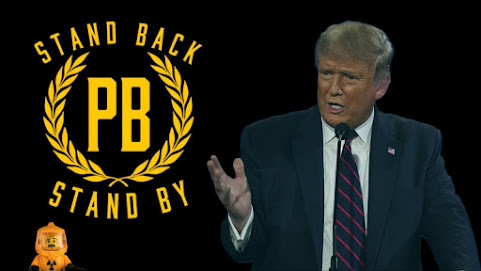 Of course Former Prez Trump gave the group a shout out during a debate. However . . . Fact is, we've been blogging about local outrage against the Proud Boys since at least 2019.

Reality check before keyboard warriors and news watchers get carried away with themselves . . . In Kansas City these kind of suburbanite crusaders regularly get beat up in Westport.

For the record, TKC doesn't condone violence of ANY sort and we absolutely respect the right of white dudes suffering early onset heart disease to engage in cosplay whilst exercising their 2nd Amendment rights . . . If only because it gives more astute denizens of the discourse yet another opportunity to chat up neglected, curvy white women.

The recent journalistic discovery is noteworthy and offers a more complete view of so many "diverse communities" which comprise Kansas City.

KANSAS CITY, Mo. - The Proud Boys are a fairly new group, but their values and actions have landed a lot of members on the FBI's watch list. Experts say the Proud Boys emerged during the 2016 election and were involved in the 2017 Unite the Right Rally in Charlottesville.

More people arrested in Kansas and Missouri after their involvement in the deadly Jan. 6 Capitol riots.Three Kansas City metro men are facing a slew of charges in the incident---all men linked to the white supremacist group, The Proud Boys and their Kansas City chapter."The Kansas City Chapter is one of many chapters of the Proud Boys, based around the country.