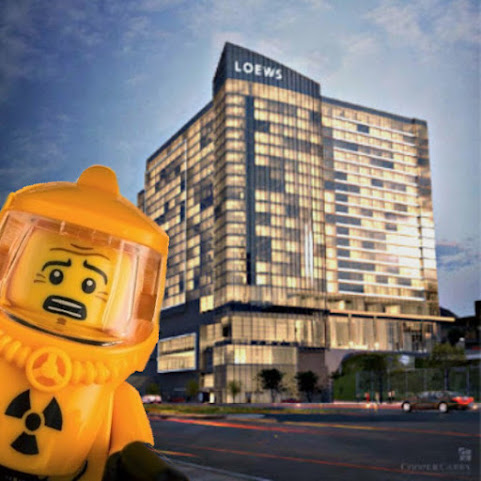 For our evening readers we share this reality check that provides the only published expression of doubt after local MSM works diligently to reassure the public on the sketchy future of the DOOMED Waddell & Reed tower in the aftermath of an acquisition.

Remember the project is the beneficiary of more than 100-MILLION worth of corporate welfare so politicos & publishers have a vested interest in keeping that money machine rolling.

Nevertheless, our readers aren't so confident about hasty promises that don't recognize shifting economic reality during the pandemic . . .

Here's the word from an INSIDER and local development player:

"I'll believe that the tower will be a vibrant office space location when I see it. But it likely won't be any time in the next five years. This situation is analogous to what happened on the West Edge of the Plaza in the mid-2000s, eventually the Bernstein building designed by world-renowned architect Moshe Safdie was torn down after corporate drama thwarted the project . . . And that development was much more ambitious than this office building. What's more important is that the economic activity near the convention center has basically come to a standstill . . . That doesn't bode well for the future given that the convention business might be completely changed coming out of the pandemic.

Either way, there's no denying that downtown Kansas City is retracting right now and a lot of people are going to get burned trying to jump back in . . . What I hope won't happen is that the developers go back to city hall to waste money on ideas that might not work until we see exactly what the "new normal" looks like in 2021 and beyond."

So you're telling me this wasn't the "missing piece" for downtown KC?

The hell you say!

And yet, Downtown will still be thriving. Weird.

We just need that stimulus from Biden and President Kamala!

Since your insiders are never right, I'd flush this speculation right down the toilet.

^^^ right along with downtown! Down the toilet! Hahahahaha!

^^^^ And yet you're so skeptical of this blog that you're here reading and participating at 9:29 pm on a Friday night. Protest too much?

The toilet is where most of Downtown development money has gone. So we'll all be in good company.

I believe everything the Star tells me. I should, I pay $900 for it annually.

They say this project is right on track. They're NEVER wrong.

I will give my money over happily.

Hey now, the streetcar is going to save Kansas City. The extension will work.

I only believe good news. Sorry.

Please tell me where I can pay $3,500 a month rent because of downtown KC vibrancy.

Shut up and take my money!

It won’t be a ghost town. There will still be about 4000 homosexuals living downtown and sucking each other

Why build they don’t owe anything to KCMO.

Um, they owe about 31 million to KCMo. That was the upfront cash q-ball and company gave away.

The hotel was always such a piece of crap. Never should have been passed through Council and was never up for a vote. It's one of the worst rip offs that Kansas City has ever seen and the way that it was passed was completely corrupt. They try to reinvent the wheel with this one but didn't realize that the Alameda Plaza had already went broke using the same dirty business model. Covid-19. Or not. This thing was always doomed to fail.

Covid isn't going to last forever idiots. The economy will get going again, eventually. And the people who are too scared and sitting on the sidelines will get left out. Think about it.

We are locked down and depressed, they go on uneffected.

How many stories of officials violating their own mandates with the msm providing lame excuses.

On the other side, we submit or be labeled evil nonmasker wearers commonners who are vilified by the corrupt msm.

Why does this town even exist again?

This City, like all Cities, exists to create the most efficient method of bringing together the various aspects - financial services, capitalization, transportation, skilled labor, manufacturing facilities, etc., necessary for a functioning Economy. These need to be concentrated in a smaller geographical area because no widespread means of rapid communications exists.

But look at the bright side!
Lots of vacant commercial real estate and cheap rents will be a great lure for the adult book stores to return!
In reality, things always tend to return to their common denominator natural state.

This is what happens when you pander to people by painting nonsense on the streets and ignoring business owners. Eventually, the "little people" that pay E-Tax give up and move out of the city.

Hopefully Mayor McKneely can kneel in front of Frank White and beg for money to keep his friends fed with handouts.

Two losers in a pod.

and then mr babbitt realized the election did not restore his faith in humanity.

hope the BLM scammers and the Covid hasn't ruined NYC

the messages in the the ether summoned him.

About 95% of the people in killer kc could give one shit about downtown, only young people 23-28 with decent jobs want to be downtown, normal people leave kc all together.

Instead of Loews, the hotel would be more aptly named The Troy and Sly Hotel.

C’mon man! Everybody stop worrying so much, the developers got paid in full for their projects leaving the taxpayers on the hook for paying off their loans, that’s how killer shitty does business amirite! Hahahahaha!

Someone once said, if kc was such a hot, hip and happening place on the move and in demand then why do we have to pay them to come here and have the taxpayers subsidize all their projects?