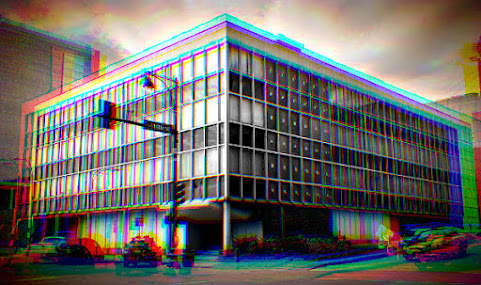 There was a myth that the new City Hall administration would bring big money gimmies to corporations to an end . . . Here's a reality check tonight . . .

During a Wednesday city council committee meeting regarding approval of the local incentives for the project, the Overland Park-based financial services company revealed that it has selected 1400 Baltimore Ave . . . Members of the Neighborhood Planning and Development Committee voted 3-1 in favor of the city’s incentive package — worth more than $40 million over 15 years — for Overland Park-based Waddell & Reed to build a new headquarters and move more than 900 employees to 14th Street and Baltimore Avenue.

The Missouri Works program dolled out $62-MILLION for a grand total of $106-MILLION IN CORPORATE WELFARE.

They'll be really close to the ax throwing place.

Fun times for EVERYONE!

The longer commutes for all of their JoCo employees will expand its carbon footprint.

The border war continues. Corporate welfare is alive and well at City Hall. and the Council is buyng the lawyer's funny numbers hook, line and sinker. Only Brandon had the cojones to vote no on these bottom feeders.

I have no dog in this fight, but, it should be a math problem.

900 employees pay how much in taxes and benefits to the community?

The 100 million dollars spent on the building get KC what?

The money spent in the community by such a large company, gives us what?

I agree with what Chuck is saying here how does the city figure this will benefit everyone?

Oh you know all those who live in Golden Ghetto will be pissed.

.. Smiling Selfies Q sez dis is a win win for the city!

Guess they have forgotten all those pledges already.

Fuck You pals at the Biz Journal said...

Hey your pals at the Biz Journal

Go look on Google streets and you see the same view maybe different cars. Did Adam ask the owner of the building to take the picture he used to make money off of? How do you copyright someone elses property without their permission?

I did notice you're a pussy who was to big a bitch to sign their name.

The sound of an idiot echo chamber.

So we taxpayers have to shell out $44 million for them to move to that money sucking pit known as Downtown?

The news comes just over a month after the Missouri Department of Economic Development announced plans to award Waddell & Reed more than $62 million in incentives for the Overland Park-based company to jump the state line.


Ah so the border war is over thing was just another line of bullshit.

Never heard of him.

Only Adam Vogel in KC works for Coca-Cola

So we taxpayers (homeowners specifically) are going to be basically paying the bills for this firm.


Wow what a deal.

The City is trying to position itself for the Upcoming recession. You move recession proof Business, Into The City. When the recession hits The Jo.will have the most layoffs. And Company's going out of Business IT is starting now Look at the Sprint Campus .

Sounds like quid pro quo, or is it bribery?

If kc is such a marvelous momentous moving forward city then why do we have to keep paying businesses to come here, if we were all that they should begging us to come here and willing to spend they’re own money, but since we’re not.....

what a great deal. Money for nothing.
THANK YOU QUINTON!

Might as well have elected Jolie. This is just a slap in the face to voters!

If the full City Council passes this Quinton and Shields should be recalled!

^^That means there are at least two of you idiots who can't stand people smarter than you.

Does this mean those Overland Park employees will have to now pay into the e-tax? We never hear anything about that when talking about border wars. I hope they do, we still have tons of potholes to fill from last year and could use some of that JoCo money here.

None of this should surprise anybody.
The people who really run KCMO and benefit from all the "economic development" and hyped "momentum" continue to run the show and will into the future.
The water carriers who do all the big talking during political campaigns and make all kinds of promises to voters are nothing more than seat occupiers at city hall masquerading at doing the public's business while meeting every priority and demand of the folks behind the curtain, under the table, and behind closed doors.
Smiley selfies Lucas and the newbies are just the latest puppets.
It never changes.

Thanks Roach! Your ruthless cheerleading for your boy... in your eyes hes the best City Council has ever seen. Untrue but at least in your own eyes.

Its about leverage, if KC wants to draw in an employer, then they might have to give up something in return.

Lucas is the weakest mayor we've ever had. Hated funkhouser and thought he was a dumbass but at least he'd stand up to people. Can't believe Q is so bad I'm actually sticking up for Funk

Chuck, it makes no sense. Waddell & Reed has jumped the State Line three times now, each time for incentives. They get rewarded each time. It’s ridiculous and a shell game.

You might be sticking up for Funk in the comparison but you’re correct.