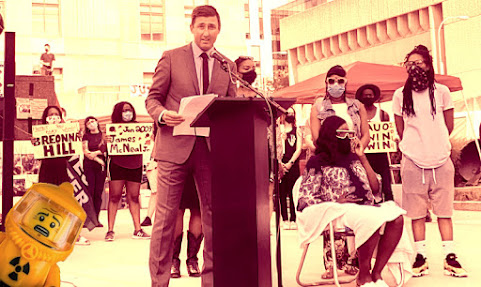 The most "woke" white dude on the Kansas city council dude offered his empathy for the tent city protest at 12th & Oak today.

Sadly, because so few denizens of the discourse have a memory, let's not forget that councilman Bunch also stood proudly with Black Lives Matter protesters but then quickly BACKED DOWN from a vote on local control.

Still, the 4th District politico deserves credit for making a bold speech today whilst our blog community was yet again proven correct about council debate over a resolution to back the protest that was politely ignored by the council majority.

but his heart is in the right place, that's what mattes!


Kansas City you have got big problems. These same protesters are turning on the city politicians who supported them in other states, and these idiots in our city government are supporting them here???? These protesters are out spray painting BLM on people's cars doing drugs living outside spreading the virus and the idiots in city hall are going to support this and go against the police?? Are you efffing kidding me? This is too radical to wrap my head around.

Meanwhile, Trump and the MAGATS are getting their lunch handed to them. Come lick my dirty ass like the hungry MAGAT cuck you are. Good boy. Pleasure me just like racist grandpappy taught you...

CENTRAL HYDE PARK AGAINST ERIC BUNCH; this asshole has to go, and go now....recall this jerk.

Councilman Bunch just isn't very smart. He sucks up to anything politically correct with the hope of expanding his failed bike ambition to something of significance to KC. Only won his seat on the Council by a few votes and never has an original idea. He has had an irrelevant presence on the Council. Hope he stays outside with the protesters, says some prays, let's off a few balloons and rides his bike into the sunset. Poor little dimwit.

Bunch is only trying to get laid. He got on the monkey suit and began groveling to the pathetic COVID crowd.

Bunch is a stupid jackass. One big suck up. Plays both sides of any issue and loses any relavance. Thinks he is a new fresh millennial to the Council, but with Robinson and Brandon, just brings dysfunction and inertia. Very ageist group who like to play the biases card on everyone else. All need to do a inventory on there own bias set and learn about real leadership.

CM Bunch is clueless. Hope he goes back to screwing up the streets with his arrogant bike mafia... before he does more damage to the 4th District. He was a mistake for Kansas City.

Bicyclists are arrogant little pussies thinking they don't have to stop at lights, stop signs or for pedestrians.

Used to work with a bicyclist and every fucking Monday morning he would tell everyone how many miles he rode his bicycle over the weekend like anyone gave a shit.

Sure loser, I used to ride my bicycle 20 miles over the weekend when I was in 6th grade. High handle bars bike with a banana seat that cost $49 versus your lame $10,000 ten speed.

Bunch, you are a clown with no experience to be on yer. Ounce. Go rise your tricycle to another city. The fourth district does not represent. The hole of KC.

Councilman Bunch looks like he is getting ready to squat and pee at the podium.

Grow some balls Bunch and quit being a cuck.


When is this asshat up for for re-election?..he's not on the current ballot. I actually voted for this douche -he was up against some greedy Democrat Firefighters Union slob...what a choice.

Can't wait to vote against him!

Eric Bunch is mentally incompetent and must be removed from office after there is a professional evaluation of him.

Bunch is imagining a police force full of cops from the village people....fucking pervert.

Councilman Bunch meant to say...
"If you have a Bicycle, every street looks like a Bike Lane",
but as usual, he got a bit confused.

Can Councilman Bunch point out a few of those "vital services that actually prevent crime" that he wants more support for?

Because we certainly haven't seen any of them in action here in Kansas City.
We've seen protests and vigils and conferences and social work and free t-shirts, and midnight basketball and speeches and community outreach programs ad infinitum, and the homicide rate just keeps going up.

On the other hand, since the Chief has been in his current position, the per capita rate of violent crimes other than homicides has dropped, and the percentage of 'clearance" of homicide cases has risen, which would appear to indicate that the Chief and the entire Police Department are doing a much better job, or at least a better job than the Chief's predecessor did.

So it would appear that the Protestors and Councilman Bunch are on the wrong track, and that the goals they hope to achieve would actually worsen the situation. Leave well enough alone, and start cooperating more!
That's what the 71% majority of Kansas City residents want!

PUT ON A MASK, ASSHOLE!

He heard that some of the old female protesters had removable dentures for a mouth as soft as budder.

Gawd, KCMO is on a runaway train to Shitville.

I am eric W bunch.
I get paid for this.

"For every nut there is a Bunch".

"For every bunch there is an enema"

This idiot is exactly why people don’t want to live in KC or have a business there. And it’s b/c of politicians like him that will screw the city up worse than it is.n

If anyone in the city with a brain hasn’t realized this nut job of a council member is exactly why the city does not need local control of the police board.