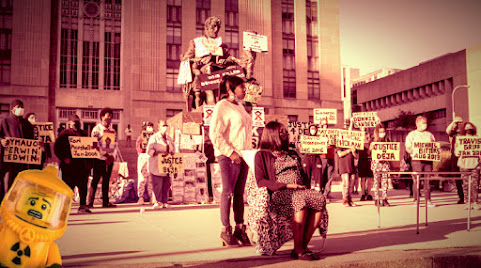 Behind the scenes tempers flare among Kansas City elected officials regarding the fate of the protest camped out on the front lawn of city hall.

So far there are only three votes endorsing this mostly meaningless legislative shout out. The Mayor's team is attempting to kill the resolution before it hits the floor and most of our Northland council members are in opposition.

Meanwhile, with no pride at all, we're happy to report that our blog community concerns about public health is gaining traction in consideration of this controversial demonstration.

Nevertheless, the protest continues for a 5th night. Here's a roundup of today's coverage . . .

OVERLAND PARK, KS (KCTV) - As some police departments in our area get ready for National Night Out Tuesday night, the country-wide effort to improve relationships between officers and the people they serve, others are protesting, and one local activist is condemning the event entirely.


The Pitch Promotes Camp Out

What is 'The People's City' at City Hall? A protest settlement and a microcosm of our community.

Each week for the last 4 and a half months, protesters gathered outside the downtown Kansas City Police Headquarters to demand the resignation or firing of Police Chief Rick Smith. Labeled "The Friday Night Protest", this has become a weekly ritual for Black activist groups The Miller Dream and Black Rainbow.

Activists who were outraged when a white Kansas City police officer knelt on the back of a Black pregnant woman during an arrest last week have set up camp outside city hall and say they plan to stay until the officer and police chief are fired.They also want the city

of course the mayor wants to kill this protest because it's essentially against him. he only gets out in the street and shouts against statues and street names!

We told Quinton Lucas that BLM would double cross him but he didn't believe anyone. Now I'm sure he wishes he would have paid attention.

Arrest them all for trespassing, this stupid crap has gone way past its self life.

Your tax dollars hardly at work Kansas Shitty! Had enough yet losers and suckers? I'm really enjoying the show!
🤣🤣🤣🤣🤣🤣🤣🤣🤣🤣🤣🤣🤣

Despite many masks, at least four COVID cases being reported.


This is how bat S**t crazy the democrats are. They blast Trump when the doctors said it was safe for him to leave the hospital but yet these people have support of city hall on living in tents and no way to wash their hands or body and I'm sure they will be making the area an outdoor toilet. Talk about spreading viruses.

Bandit, I generally agree with your take on things, but your continual "bragging" about how fucking smart you are to leave KC is wearing thin. Most folks who would love to escape this shithole don't have the means, and your narrative is fast becomng boring.

I'm not paying for this stupidity Regality Speaker. Not my shithole. Not my problem. When others have had enough they will leave too or deal with the hell that is coming at light speed.

Hey look, It's the last 9 people in Kansas City, Missouri who are voting for Trump.

I hope that dog food tastes good. It's all that your president is going to give you now that he canceled your welfare check.

Jesus I hope this ends up just like another chaz.

It'll be nothing but vagrants and drug addicts in about 4 weeks.


was near downtown today..so I wanted to see the freak show and drove past the campers.. they had the usual BLM BS signs and posters.. tents were actually set up in fairly good order ..pretty close together.. noticed around 20 or people just sitting around in front.. looking bored shitless!

Cranked up some Joan Jett full blast ..hopefully annoyed them,, and woke up any scammers catching a nap in their tents.

Kiss my ass Kansas Shitty! You reap what you sow and you are about to get it in spades!

if Mayor mcdumbo really wanted them gone then he would have already, he’s using these clueless dum ducks to prove that the whole of kc wants the chief gone, we don’t, we like the chief and want him to continue the mission. Lickass childishly thinks jeff city is going to cave in and fire the chief because of the massive 10 people protest, he’s a fool playing a fools game.

And “quite frankly” the citizens of kc are sick and tired of his failure to lead this city. Recall coming soon.

You tried that already, didn't work.

Give the people their money back and stop being a rip off artist.

Nine people is about what’s in your tent city. And yes, you are actually very sorry. Now back to your mom’s basement social warrior. I’ll be over later tonight so get some beer in the fridge while your mom and I are occupied.

Not coming back 9:45. The only thing that will fix Kansas Shitty is a tactical nuclear strike.

The Democraps don't want to pass a bill unless it bails out their poorly-run cities and helps illegal with our tax dollars. The Republicans saw the game the Democraps were playing and were smart enough to call bullsh*t.

Record homicides.
Water bills at $100/month.
Crappy streets.
Financial catastrophe looming.
City hall layoffs.
Major health pandemic.
And the KCMO mayor and city council have a debate over the importance of a little band of losers "led" by a self-appointed "celebrity" desperate for attention who have camped out on public property.
You really can't make this stuff up.
And it's a perfect example of the incompetence and upside-down priorities of what passes for city government in KCMO.
Sad.

Could we please see some talk between the police department and the city and BLM that excessive use of force can be curbed? Some movement toward conversation could help all sides. Throwing a pregnant woman on the ground isn't necessary nor productive.