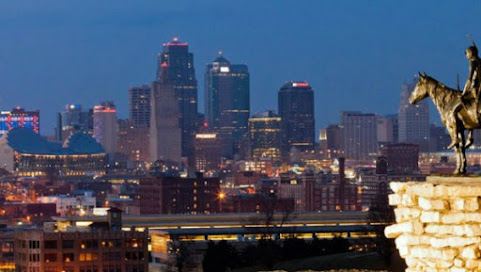 Dead-tree media reports of local hospitals closed to new patients because of the pandemic amid the growing number of infections and deaths have prompted panic among news watchers.

Accordingly, this headline from the New York Post has garnered attention from around the world:

A KICK-ASS reader who sent us this link chimes in about the NYC comparison: "In terms of Covid ... And ... In the way our city got trashed and abandoned after the "peaceful protests" ...

"Some Kansas City-area hospitals are turning away ambulances because their beds are already filled with coronavirus patients — prompting one worried doctor to predict the area could become “the next New York.” "Eight metro hospitals and emergency departments had so many patients, they temporarily stopped accepting ambulances starting Wednesday night"

Right now, according to the KCMO Health Department there have been 165 deaths from COVID-19 and 13,273 lab confirmed cases.

Accordingly, even on a per capita basis . . . That's a tough comparison.

Still, the mention among Empire State news kinda reminds us of the not-so-long-ago time when bored Gotham media imagined that millennials were going to move to Kansas City and power a new economy. That didn't really happen . . . But it was an interesting idea.

And so, forgive the horrible pun . . . But this isn't an "apples to apples" comparison and the reports deserve some skepticism.

Whilst we won't pretend to play doctor with journalists, statisticians and public health officials . . . It's fair to clown the analogy whilst still taking the cowtown impact of the pandemic seriously.

We want our lowly TKC blog community to wear a mask in crowds, wash their hands, faces & butts regularly and maybe share a bit of skepticism about the mainstream media narrative that can't always be taken so seriously during the otherwise ridiculous 2020 campaign season.

Please get over yourself people.

I tied to tell you Kansas Shitty! Then I said the hell with this and moved. It's all yours. You figure it out. Not my problem anymore.

Funny how they keep feeding the New York newspapers with false information about kc, the info they’ve been giving them is three counties and a city (kck) in Kansas and theee counties in Missouri and kcmo. That’s a lot of cases when kcmo has only had over 13,000 cases since March and actually they haven’t increased much at all in at least three weeks now.

I guess kc should let President Trump come in and save them it’s the only way we can survive now with mayor mcdickhead in charge, he’s worthless and weak.


Sounds like Mayor Lucas and Health Director Rex Archer are doing a really shitty job and should be fired as they are in charge of the City's health.

I work at a local vet clinic, and our waiting rooms are full of corona virus patients that were turned away at the hospitals.

Shhhh! Don't give away the secret! I get good treatment and a snack! That is my Obamacare!

Ok you can piss off now.


Hunter Biden sez you fill one of them there ventilators with crack cocaine and your corona virus will be cleared up in a hurry.

Everyone should have a son like Hunter fucking his brother's wife after his brother beau died in the military.

That is one helluva a loving family.

My brother's wife's sister's friend works for the Chiefs at Arrowhead Stadium and she says they stack up dead corona virus bodies like cordwood after every Chiefs home game.

KC Wolf likes to fly over the pile with his ATV. That KC Wolf is always making everyone laugh.

The doctor does not know much about NY and corona virus. Every NY'er who needed a hospital bed got one. Ventilators, the same. PPE, ditto. A hospital ship was sent to NY to serve the infected persons who could not find a bed elsewhere. I recall it had all of four customers, and eventually left NY mostly unused. Most of the equipment Cuomo ordered in a panic was not used and was eventually shipped to other states.

Be afraid. Stay inside. Wear the mask.

2 more weeks to flatten the curve

The 2nd wave is just around the corner.

My advice, learn to re-load. Get the powders, primers, etc and start building a stockpile.

TOP PHOTO -- SCOUTING FOR A VICTIM

My vetinarian takes Obamacare. I got all my shots, dewormed and a scooby snack. Im on the Gold plan

No shit, he really did say that. This guy needs to be in a psych ward stat.

Herman Cain says its just like the flu, not to worry. But he is Dead due to Covid19 - so he is wrong - dead wrong!

Wasn't the the curve supposed to be flattened like 2 months ago? I want to grab the end of Dr. Fauci's tie and slam his mug into the table three times.

Stay in your basement. Be afraid. Very very afraid. You will get this and die.