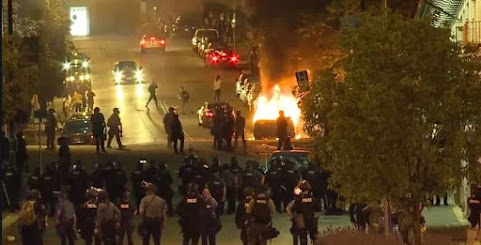 There's no denying the threat of continued civil unrest as the election draws near.

KCPD incurred 2.1 MILLION BUCKS worth of overtime and other expenses associated with violent protests following the death of George Floyd.

As 12th & Oak budget problems worsen, take a look at other American cities and notice violence and confrontation with police persist . . .

PORTLAND, Ore. - Federal authorities on Saturday forced demonstrators away from a plaza near a federal building as dueling demonstrations in Portland by right-wing and left-wing protesters turned violent. The area includes county and federal buildings and has been the site of numerous recent protests.

Before coronavirus hit, Portland was one of this cities that KCMO wanted to emulate . . . Now this progressive enclave is clearly at a loss in how to stop civil unrest.

What will it take to stop violent protests in Portland?

A retired assistant U.S. attorney offers his thoughts on the ongoing unrest including fires, vandalism and riots. PORTLAND, Ore. - Retired assistant U.S. Attorney Stephen Peifer has a unique perspective on the violent protests in Portland. During his time as a federal prosecutor, Peifer handled domestic-terrorism cases and learned a lot about anarchists, eco-terrorists and violent extremists.

Meanwhile, protest in Kansas City have been consistent since the outset of the year. The confrontations have been "most peaceful" but with horrific damages and danger when some local clash violently with authorities.

Thankfully, protesters and bystanders kept their calm amid tonight's demonstration with a local focus . . .

For thirteen weeks, people have taken to the streets of Kansas City in support of the Black Lives Matter movement. The gathering at Mill Creek Park on May 20th was Bryan Boccard's first time attending a protest.

Thankfully, we haven't seen violent protest from the right or Trump supporters but that isn't out of the question as tempers and division rise to historic levels and none of us know how this election hot mess will turn out.

And all of this inspires our playlist tonight . . .

TKC always applicable advice: Stay home and surf the Internets, play video games and goof off rather than break stuff.

A lawyer with a bullet proof vest, that’s all you need to know right there.

Possible rioting after the election results are called (no matter who wins) has been one of my big fears. I pray it doesn't happen anywhere, but especially not here.

Democrats know Americans don't want a pedophile president, so they're lashing out.

https://youtu.be/k4XMvWIRmx0 Joe Biden never hid it. He'd do it on C-SPAN.

Jeff Sessions hit Joe's hand away because EVERYONE KNOWS THESE FACTS.

Democrats are getting really violent because Americans won't put up with this shit.

And they're rioting to put them back in office, this time.

The Left can't handle America not being torn asunder by unnecessary war. We get stronger and they cry out in pain. They want us in eternal war to weaken us.

Vote for Joe if you want war.

>Thankfully, we haven't seen violent protest from the right or Trump supporters but that isn't out of the question...

Actually that is out of the question. Trump supporters may be in their homes in the suburbs and rural areas stockpiling arms and ammunition for when the monsters come to devour them but they don't burn down cities like the left does.

"Now this progressive enclave is clearly at a loss in how to stop civil unrest."

No, Portland is not at a loss over what actions are needed and never was. Their mayor supports the riots and rioters and handcuffs their own law enforcement to keep the events going. He makes our own McKneely look like Florida's Sheriff Judd. Remove the mayor and you'll remove the restrictions on taking down the riots. But that won't happen since their city's current condition is exactly what those citizens want.

On another note, that photo of Stacy Shaw demonstrates another of her lies. She always claims she wears a vest with "ATTORNEY" written on the back. Clearly it's the word "LAWYER" emblazoned across her butt. A small lie but it is yet another she keeps repeating.

Left wing and right wing groups in clashes is reminiscent of Weimar Germany. When the two sides clash the police should stand aside and let the two groups kill each other. It would help eliminate the idiots from the gene pool.

If the BLM idiots make the mistake of coming to my house and my city to cause trouble, then they are going to find out the hard way what "exercising my second amendment rights" entails.

We will not hesitate to blow these idiots to kingdom come with extreme violence and extreme prejudice.

Antifa/BMA represent the heart and soul of the anti-white, anti-success, anti-God, anti-America party (the Democrat party).

Portland as a rule only sees about 25% of the killings per year that Kansas City does. So can things get worse here? Sure it can, the illegal guns and violent people are already here they just need a spark to ignite the kind of violence and destruction that all of a sudden is destroying Portland. The city government in KC is just like what is now in Portland and will stand back and allow the rioting to happen because the Mayor will be in the street with a bullhorn inciting it to happen with his fist raised in support.

Chief Smith will be clueless to stop it for fear of being fired and Mean Jean won't prosecute anyone so lock and load people because only you will be the ones protecting what it yours and what you own.


The rioting is the fault of your mayor. If riots break out you have no one to blame except him. He is letting it happen and he is even inciting the violence.

Where was KMBZ news when they were blocking the intersection at Gregory and Wornall? No one. I mean one should have the right to block an intersection for a redress of their grievances. What's going to happen on September 5 when these folks shut down 63rd and Brookside to do their "artwork" with the sanction of the city council? Unbelievable! I don't care about what they are protesting however when it comes to my right to get where I need to go they have crossed the line. My recommendation for BLM and its allies is to paint their "artwork" in the middle of the night.

Responding to Anonymous said...
A lawyer with a bulletproof vest, that’s all you need to know right there.

I know plenty of vets in this town who are organizing and who are not going to stand back and let it happen.

What lawyer in a bullet proof vest? Evidence...put up or shut your hole.

7:06 I seen a video on local news showing a fat fat pig with a bullhorn, on her back side was large print "LAWYER"(ambulance chaser/personal injury).

What do you think her motives are. Cheaper than a TV ad. Check the local news websites, not going to do your work for you.

Look at the picture in the article, a-hole.

Those were all left wing, dude.


Not comparable at all. Feel free to keep lying about history. It's really easy to debunk that crap.

If you aren't talking with your neighbors about the facts and making plans then you aren't safe just because you have guns. That's just more to loot if they can get one over on you.

Even before the Kung Flu and the Pink Floyd riots, Portland was already a shit hole. Nobody but a leftist moron would have wanted to live there or any place like it. Portland has been an epicenter of evil in this country for a very long time.

^^You “seen “ a video Cletus? By golly how you reckon that? I mean the electricity been turnt off at your trailer fo months.

There will be more riots when Officer Chauvin gets acquitted of the murder rap. BLM hates it when the police are allowed to defend themselves in court.

When that happens, I hope he will sue the crap out of all the people who have labeled him a murderer.

The pavement apes and clueless millennials will riot either way. They just want to break shit and get free stuff. Never had a damn thing to do with changing anything.