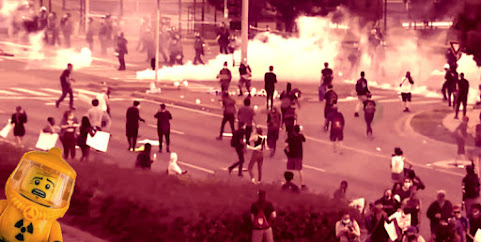 Point of fact: Kansas City protest riots on The County Club Plaza were not "mostly peaceful" and many local media outlets lied to the public in an attempt to spin the story for political gain.

Thankfully, the facts and PRICE TAG tell the story better than any article, post or social media share . . . Here is official word from KCPD:

"The Department has incurred $2.1 million in overtime and other expenditures associated with the protests."

The final tally was just released yesterday as the po-po tallied the costs of attacks, hospitalizations, a torched police cruiser, and a great deal of controversial crowd control gear expended.

This post isn't about justification or rebuke of the riots . . . That's for readers to decide.

What's most important is that THE COST TO TAXPAYERS IS DOCUMENTED as "journalists" have already started rewriting Kansas City history in order to justify their own narratives that have little if any connection to reality on local streets.