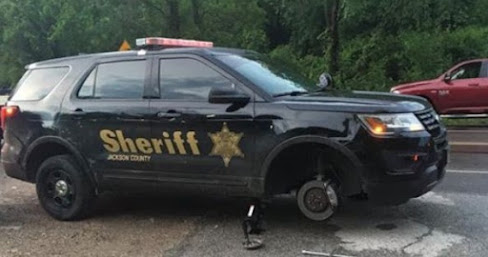 We talked about insider baseball police probs for Jackson County back in June . . . Now car complaints are a last minute election ploy among locals hoping to influence the election.

Blast from the past:

"The Jackson County Sheriff's Department is coping with a car crisis. A lack of money to provide windshield wipers, oil changes and front-end repair has frustrated deputies and has the fleet of cars falling apart . A line from the report: "Deputies driving cars with tires so bald, chords are showing through. Told not to run emergency or their tires will blow up."

There isn't much polling data available but Sheriff Forté still seems to be a safe bet to win the primary according to conventional wisdom.

However, an upset isn't completely out of the question . . .

INSIDERS CONCEDE THAT THE VOTE COULD BE CLOSE!!!

This tidbit come from a supporter of the incumbent Sheriff who has used the threat to unseat the law enforcement official in order to rally GOTV voting efforts . . .

"I think the Sheriff will win but not by a landslide. There is way more opposition out there to his administration than what's being reported right now. He's very unpopular among law enforcement and he'll really have to rely on urban support. I think he was wise to tone down some of his rhetoric as the election moved closer. What's frustrating to me is that the media is glossing over Former Sheriff Sharp's history and resignation in disgrace from the office."

We've reported both sides and some denizens of our blog community has expressed frustration with the choices in this vote.

Remember, TKC DOES NOT MAKE ELECTION ENDORSEMENTS. We're watching this contest simply as a gauge of community support for the administration of Exec Frank White and enthusiasm for voting in the time of coronavirus.

Of course its a close race.
What do you expect when the public would be much better served by picking a name at random out of the phone book?
A real lose/lose proposition!

If he is un popular within the department, then there is no team. A hostile working environment creates stress, and goes out into the streets, where officer must be on alert constantly, particularly in these difficult times. What would we say to the disgraced Kennedy family, had there been social media back then. More to the point, we need officers to care about the community and they can't do so under duress, and un safe transportation that should never be an issue, last year, this year, or this minute. TOOLS TO DO THEIR JOB that we the taxpayers have provided. Don't care who wins, do the damn job and get off the power trip.

Forte did the same thing to kcpd, he ran their fleet into the ground, it wasn’t till after he got asked to retire that the current chief got them new equipment. Forte is an asshole that treats his people like shit. And then the dipshit disappears for weeks on end riding his motorcycle.

Yes, Forte was asked to retire. Ask him why.


Wow Jackson County is just as bad as The city. You have Forte who is a thief and a "woe is me I'm black, wanker." Then you have Sharp an orgie lovin fool who likes to pander to the black churches, and do the multiple partner sex thing. Jackson County is hosed.

No sympathy from me on this subject. For starters, look who's in charge. He has a track record for doing this. As far as the no money things goes, Jackson County did it to themselves when they ordered everyone to cower in place. Wan't money to fix the patrol cars? Open shit back up. It will generate this thing call tax revenue which you can then squander per the norm. Jackson County has a very rude awakening come December 31 when property taxes are due. A good portion of them will not be paid (most notably Frank White's) and Jackson County leadership will have no one but themselves to blame because their stupid decisions and corruption created these circumstances. Tissue?

There's something wrong when we have no viable candidates for Sheriff...

Both of these guys are disgusting and insults to their uniforms.

The Jackson County Sheriff election is a contest between a giant douche and a turd sandwich.

Yep. It's a pattern. All the way to the swamp.

You can have any color you like as long as it is red or blue.

Say what you will about Forte, but when he was chief of KCPD there were less murders than under Smith's watch. I say bring Forte back to KCPD.

It's only blue in Jackson County, though. Has been for longer than anyone's been alive and active as a voting age adult

It's also why we don't have local control of kcpd.

It's a machine. A monopoly. Only one party rules over all

Sad that taxpayer money was diverted to the Chiefs which allowed Patrick Mahomes to buy a Ferrari while the Jackson County Sheriff's department are having to drive on bald tires due to lack of taxpayer funding.

Or the money was re- directed. BTW..JC Deputy Facebook is an interesting read. A top officer brags about being a crip. Not really funny when you consider kids that dream of serving the public, will get the wrong idea.

Gangsta" with a badge.