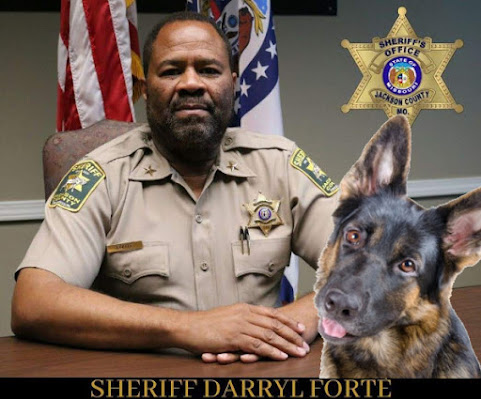 Behind the scenes, there's word of ongoing turmoil within the Jackson County Sheriff's Department.

In fact, a scathing two-page memo is making the rounds among insiders at the courthouse and it describes fights with management that seem to constitute a low key crisis.

We have the document but it contains law enforcement names and allegations, so for now we'll just list a few highlights that will soon become more clear and should seem familiar to so many 12th & Oak denizens who have read the report.

- The K-9 Unit is hurting for cash. Care for the doggies has been jeopardized because of credit card authorization problems and overall it seems like this division of local law enforcement is struggling under current management.

- The Jackson County Sheriff's Department is coping with a car crisis. A lack of money to provide windshield wipers, oil changes and front-end repair has frustrated deputies and has the fleet of cars falling apart . A line from the report: "Deputies driving cars with tires so bald, chords are showing through. Told not to run emergency or their tires will blow up."

- Coronavirus policy for the Jackson County Sheriff's Department is not universal. Amid an overall lack of clear policy, One employee complained after he was forced to use personal sick times for quarantine.

Even worse, there are allegations of corruption and scary insinuation that law enforcement officials tipped off a night club owner before a search.

To be fair, Sheriff Forté has also called out corruption within the department along with allegations of racism and resistance to change.

Here's what we know for sure from the looks of this memo . . .

MANY AMONG THE JACKSON COUNTY SHERIFF'S DEPARTMENT RANK & FILE SEEM TO BE REJECTING THE LEADERSHIP OF SHERIFF FORTÉ!!!

This isn't a big secret but now we're getting a look at management issues and specific allegations that that point to personnel drama about to go public very, very soon.

KCPD had issues with cars long ago. A constant problem for law enforcement. The problems with repairs are commonplace in every department.

fire frank and everything else takes care of itself.

Look we all knew Forte was a bad pick when he was handed the job and this here is proving such. Forte is a piss poor administrator.

Fire the jerk and bring in a real cop.

only part of the problem here.

Jackson county has a long history of fighting before election tie.

Mike Sharp is running again. I'd vote for him before I vote for Forte.

Corruption in Jackson Co.
Big news ! HA!
I remember when E.C. used to get away with everything under the sun within it's walls and the Sheriff never heard a thing about it.

Do we even need a Sheriff's Department? Benefit to the community? None.

The surrounding cities need Jackson county and from the looks of things happening today, the counties could be the only police depts left. The good news is the city can’t tell the county what to do, the bad news is taxes are going up again and again and.....

Forte will run the county into the ground, the wheels are falling off now, we all knew it was a matter of time for this to happen.

Fire all of them and start over.

Is anyone BUT Sharpe running against him? My neighborhood is littered with Sharpe signs. The guy resigned from office amid money and personnel corruption allegations. Now, "20 minutes later" he may get his job back?! Voters are lazy.

Forte inherited a piss poor department. He had an opportunity to make some serious change but instead choose to work with what he had in the hopes of driving change. This unfortunately didn’t work out so well. The reasons are not surprising.

1. He didn’t fire those that were complicit with Sharp and Hugh Mills as they did many illegal, unethical and immoral acts that forced Sharp to resign and Mills to retire.

2. Not only didn’t he fire these people, he elevated them to better positions. He promoted Mike Montgomery from Captain to Major. He promoted Rhonda Montgomery, his wife, from Sergeant to Captain and he left Captain Mike Rogers in a very sweet position of running the backbone of operations at the department. These three people alone were Loyal so much to Sharp that they would work behind Forte’s back to sabotage the department to get Forte out.

3. The department is ate up with racism and no amount of diversity hires in going to change the racist culture anytime soon. Forte is trying to bring diversity to the department but he himself is causing reverse discrimination. Of his last 4 new hires, two are black, one is asian, and one is a white women.

4. The department has no real mission, contributes very little to local crime fighting efforts and is pretty much just a bunch of guys driving around on their phones listening on their police scanners the local police doing real police work.

Regardless Forte is going to be a better choice than Sharp.

No matter the corruption in the Sheriff's department before, we don't need a damnable white hating, Constitution despising racist and thief in his position.

So now forte and Frankie boy are animal abusers? Call in kc pet rescue with all the news media to rescue these poor animals that they wont properly feed or take care of.

Forte only cares about kolored people. He don’t give a damn about dogs, whitey, Mexicans Asians and especially the gays.

After the biggest robbery of citizens headed by Edwin Stoll and Gail Beatty in KC History the county doesn't have enough change left to take proper care of their dogs?

I don’t like Sharp at all, but anyone has to be better than dumb piece of shit Forte.

Karen McDougal was a playboy model that Trump has sex with 2 years after his marriage to melina and his baby had been born. At least she was a playboy model not a sex worker. Not sure if he used a rubber on her. But at least our city leaders are not ruining their personal lives and paying people off to cover it up. I wonder how many women Trump has had sex with. And how many were sex workers?

^^^^^^Same person posted both of those I hate Trump shit

Otherwise you're a liar.

Another example of here the voters in Jackson County are presented with the choice between Tweedledumb and Tweedledumber.
JaCo politicos at their very finest!

This is absolutely none of your business.

According to who. Your lord and master the lame stream media?

since when has Jackson County EVER been an good example of local government. Nothing ever changes there, and the crooks are just replaced with more crooks. The only surprising thing is that anyone is suprised.

This is a result of kcps being so incompetent that they cant teach little koloreds to read, write and do arithmetic, you keep’em stupid for generations and give them a little change to make them happy and they’ll vote for Putin, that’s how stupid people in kc have been trained to be. It’s all a despicable dimwit plot to take over the country for their own personal gain and enjoyment, can you imagine being around these idiot Jackson county politicos and the laughing they do at their base because they are so stupid that they keep voting them in, Frank, forte, the cleave all worthless pieces of shit but they keep get voted in time after time. Embarrassing really.

Has anyone contacted peta about this?

Forte is a poor politician who inherited a broken Sheriff's office with little in the way of actual law enforcement responsibilities in a 98% urban population and whose members had way too much time playing soap opera. Then he got running a dilapidated, over-crowded jail dumped on him because of a feud between Frank White and the County Legislature.

Being an actual law-enforcement professional put in charge of a soap-opera cast has had its challenges. Being handed a jail with locks that don't always work even more so. After the past two weeks, KC wishes it had him back.

I agree!! Sharp isn't worth a vote.. Wouldn't elected him to be dog catcher!!

Forte being the sense builder he is kept the snakes in his command. Now there striking him!!

He should clean house and start anew!!

Forte is more concerned with being a glorified security force for business owners and placating a horrible, lazy deputy who sued the county and now gets to be the public info officer. It'd be nice if they could back to actual police work in the county.

Everyone is racists, that's what the dam government, internet and media has done, with this covid-19 shit, the government and media has got the population under its control by using fear and restraining everyone at home then media blows up any news that has to do with blacks and whites turning it into racism, blowing shit all out of perportion, now the whole country is falling apart Americans be it black or white should stand together, all this is doing is opening a opportunity for terrorists to plan some big attack while we are fighting with each other,racism? This isn't the dam 60s white people don't owe nothing to blacks,whites are the new blacks, I bet in 25 years whites will be crying racism ,or you owe us for suffering and racism, white lives matter! American lives matter, there should be no color in america, it's embarrassing to see how short America has lasted, just couldn't handle the power, taking God out of education, that's complete bullshit, take God off all American bills, better yet get rid of money and we use a chip under the skin of you don't accept the chip then you dont but food or gas or anything, government is in control, order out chaos! Hmm I've heard this before? Watch this happen,it will happen