Whilst Kansas City plebs & politicos are busy fighting about social justice . . . THE REAL NEWS about a new KCI paving contract worth 80 MILLION BUCKS is pushed out of the spotlight despite power players across the metro following the story more intently than any other topic.

Remember that The Heaves, the unions and urban leaders have all spoken out against this bid.

We've also identified the major players in this controversy . . . Northland Council lady Teresa Loar has raised her objections in public as well.

Now here's a note that changes EVERYTHING . . . 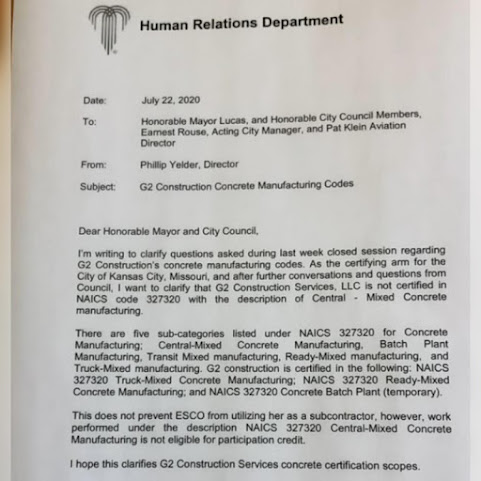 Obviously that's a major part of one of the biggest paving contracts in Kansas City history.

THE EFFORT TO FLIP THE NEW KCI AIRPORT PAVING CONTRACT NOW HAS MOMENTUM AMID THIS MAJOR VICTORY!!!

Moreover, as New KCI moves forward we're seeing increased pressure from minority and union leaders for local participation and complaints against the bidding and construction process are now reaching a crescendo.

The bid should go to a local company. That's what KC was promised when we agreed to build the airport.

We were promised a lot of things. And none of them seem to be happening. For instance, that ceiling waterfall has now been eliminated.

If you look closely, the airport now looks like nothing more than a glorified rental car kiosk.

love that fountain from ceiling.

We needed to include that. Now the airport just looks like a giant mess.

Wonder if there'll still be any Airlines flying by the time the "New-except-it's-a-70-year-old-design KCI" is finished?

a certain percentage of people are unlikely to fly fir a long time.

on a positive note, a possible uptick in flying might coincide with the airport's being finished.

Sounds more like a scam to eliminate a good contractor and trade down to some fly by night local sidewalk contractor because they’re connected to someone at city hall.

“G2 Construction was formed in 2012 and has matured through the experience of its founder and senior staff from a concrete placement company specializing in airport runways to a full service manufacturer of ready mix supply with its purchase of a state of the art mobile concrete batch plant.”

Interesting, they specialize in airport runways but city hall found some weird as naics code that apparently no other airport that they’ve worked on required.....

Probably thrown out because it’s owned and operated by a white woman.

So there’s different types of NAICS 327320 but they decided they couldn’t do the job because of one part of it, they do own their own concrete batch plants (G2’s own website states this fact) which wasn’t mentioned as a deal breaker so why does this look so obviously suspicious?

And G2 is a local company owned by a woman. Very suspicious

Another round of typical due diligence by the crack KCMO goon squad.
How's that $4 million and counting paragraph for taxpayer support of Mike's new hotel coming?
The original gang who couldn't shot straight!

The Company is owned by Lisa Garney, daughter of Charles Garney, owner of Garney Construction and formed the briarcliffe development company. Lisa purchased a concrete plant with no prior concrete production experience, presumably to capitalize on the DBE aspect as a WBE to gain a national contract while not actually meeting the guidelines for bidding on the contract. Despite this, the KC Aviation Department has been planning to approve the contract to G2, ignoring other bids that actually meet the requirements...gotta look into who is getting paid off to sway the decision to G2 Construction.

Voters fell for another of city halls bait and switch schemes! Nothing will ever change until you VOTE for quality candidates and not identity politics!

With the new net worth limit to be considered a WBE or MBE many of the subcontractors on the airport project are losing their MBE/WBE certifications. This means the contractors have to go find new vendors to do the work at the airport. They have to use MBE/WBE companies that are not successful and haven't made much money i ntheir business. Edgemoor is going to be hard prosed to fond MBE and WBE companies to meet their affirmative action goals as they are now limited to tiny inexperienced contractors and vendors.

And a poorly built airport!

No surprises here. I'm told they are giving the roof contract to a Canadian company over a group of KCMO minority firms. https://flynncompanies.com/about-flynn/