The biggest contract awarded for the construction of New KCI has united workers from across the metro in opposition against an out of town bid.

READ THIS  LETTER TO KANSAS CITY AVIATION SHARING LOCAL OUTRAGE ABOUT OVER A PAVING CONTRACT WORTH MORE THAN 80 MILLION BUCKS AWARDED TO AN OUT OF TOWN FIRM!!!

Here's the money line that explains the situation . . .

"We are sure you are aware of the significant role the Heavies, Builders, Unions, and the community played in bringing the KCI airport project to fruition. The Build a new KCI project was sold to all of us under the guise that it would be a transformative project for the contractors and workforce that live and work here in the Kansas City region. Included in that narrative was that local contractors that subsequently employ a local workforce would be awarded work.

"You can imagine our befuddlement when we heard that the largest civil package would be awarded to an out of town, non-union contractor. We were further stunned to learn that the recommendation is a Colorado based company by the name of ESCO Construction Company, a contractor that has no experience in concrete paving (which is 80 million of the over 100-million-dollar contract). This creates a significant short- and long-term risk when awarding these types of projects to firms with no experience and from out of town. Aside from the issue of bringing an unqualified, non-union, out of state contractor to Kansas City to perform a scope of work they don’t normally perform, Kansas City is providing a resume for an outstate, non-union contractor not knowing whether they are even capable of performing the work . . ."

There's widespread objection to this contract from across KCMO.

"The city is moving forward with awarding this contract with virtually no minority business participation. They appear to sacrificing minority business participation to help white female business. The City Council is doing nothing. This is another example of the negative impact of awarding the development to Edgemoor. Black and Brown businesses are not getting contracts and minorities are not getting jobs."

Read the note from the Heavies & Trades Council in its entirety. 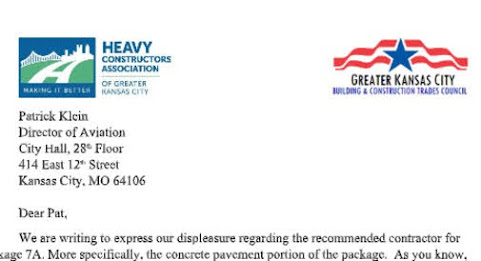 New KCI has been one big lie from the start. They said it wouldn't cost KC a dime but it has actually cost us millions. This is just one more slap in the face from Sly and anyone else who voted for it.

KC's resources shipped out of town, that's what happens when we pick a firm that doesn't have any stake in Kansas City.

Happens with most city contracts, with the airport it has been standard practice.

I am totally opposed to minority business participation. I am opposed to union crybaby participation as well. Just hire some illegal Mexicans to do the job cheap and when it’s completed, just round them up and ship them to California.

Then wouldn't it be even better to enslave some Trumpets to do the work and just kill them on completion?

^^^ it’s a union job dumbass, that means they’re all dimwits so go ahead and kill them when the jobs done! Hahahahaha,

Yes a bigger lie than P&L Streetcar or 18th Vine. But TKC's right wing commenters have been licking it up like a dog on its vomit.

I agree with using an out of town asphalt company, you all apparently have forgotten how shitty out roads are from local company’s doing the work, they’re all family of special interest groups connected to sLIE, Lucas and city clowncil members, local companies work falls apart within months and they’re expensive as hell.

If you won’t the work to be done right you have to go with out of town companies.

7:58 you and your bullshit got smacked down, stay down loser.

Crooked Kansas City. That's why "local control" of police is the biggest mistake we could make.

8:06 you idiot they will use local asphalt to do the job asshat. They won't be hauling the crap in from out of town.

Don't just love fuckfaces like 8:05 who don't know shit but can't keep their mouth shut either. Sort of like Byron Funkhouse aka Fucking Retarded Asshole

“licking it up like a dog on its vomit.”

That’s what Democrat run cities do to their citizens, make them eat their own vomit if they want to live.

If the union crybabies need work, they could fix potholes at minimum wage.

The material has to come from here moron, no where does it say they have to use the corrupt, incompetent local company’s or its illiterate local workers to lay it down.

Jesus Christ man, I told you to stay down retard, and I meant it.

Any asphalt contractor big enough to bid a contract this size we'll have a portable asphalt plant to set up. They're not going to throw money to a local asphalt plant they could put in their own pockets.

“Black and Brown businesses are not getting contracts and minorities are getting jobs."

This is code for give me some money or else. There isn’t one black or brown company in kc that’s big enough to do a job like that. The concrete company tycon who’s probably behind all this has pat clark on their board, he’s the same pat clark that runs around at all the crime scenes around town. That company has a couple concrete trucks, dump trucks, back hoes and bobcats, none of which should be allowed on the streets. They can’t handle the small jobs of replacing sidewalks for the city. This is just one example, those company’s weren’t really supposed to do any of the work, they just want a cut of the money.

The problem is this, this is all supposed to be private money being spent and they’re not going to get swindled by some black thugs who cry racist every time they don’t get their way.

These same groups were on board when Patsy Klein was in Public Works and over the East Patrol project that gave contracts to tons of White people.Their complaining is old and tired. Whitey wins.

My off the cuff opinion is with this type of construction can a company or specific trade specialist go upwards towards a year or more before drawing any compensation/payment.

Could anyone in k.c. provide that type of service all the while not really knowing when money is going to show up? I guess that question could apply to anyone.

With the new net worth requirement for being considered a WBE or MBE, you will see no more participation by these companies. If you are a woman or minority and have a successful business and you have too much money, you will lose your contracts with KCMO. Now they will do business with WBE and MBE companies with no experience, no track record, startups who will screw things up.

The local builders have strong points. Awarding contracts to Construction companies who have no experience in that scope is a formula for failure. As a retired Construction Project manager, I would never do that. It's a knife in the back for local contractors. The General contractor in this case could have made the contract buy out open only to locals but as good business men went for the lowest bid. But how did they qualify this Contractor??? That's big question. Concrete business is not as simple as people might think. In the end, the way the airport deal was set up, the Council is free of accountability for this. Some very smart people set this up.

There seems to be the assumption asphalt will be used by commenters above. I'd like to see the scope.

It is concrete paving

you were befuddled? It was VERY predictable.

i went to one of Edgemore's presentations. Was obvious it was a rudimentary bullshit session and you twats ate it up.

If MBEs and WBEs haven't figured out after all these years how to bid and win contracts, there's no hope that they ever will. Get rid of those expensive giveaways.

10:39 awww chimpy, you’re so cute with that banana stuck in your azz!


give the Democrat greedy union slobs , and "minority" scammers, work in the 18th and Vine area shitshow..nobody cares.

.but Airports, particularly their landing strips, are IMPORTANT..and must be done right..or lives are at risk. May the best qualified company win.


1) We didn't need to build a new airport
2) Throwing away the existing one was fiscally irresponsible
3) Throwing away the existing one way environmentally irresponsible
4) It's going to cost us more than 1 billion dollars to destroy the old, cart it away and build new
5) They promised it would be done with local firms
6) They lied
7) Going forward, once this boondoggle is built, we'll pay out the nose to fly in and out of our city
8) The existing airport could have--and should have--been updated for security

But hey, thanks Airport Authority! At least you're going to get your shiny, new playtoy!

What they failed to tell you was a local MBE won the wet utilities portion of the package. Edgemoor/CWC should award that prime contract to the minority-owned firm.

Union workers cost double the money..Any smart business would use nonunion workers. Unions are a drain to the economy. Unions are the reason we pay so much for basic services.

Im going to say this isn't Mo Rage. From the top down, the airport was the progressive ruling class' toy voted in by the easily manipulated prog foot soldiers. All progs are required to approve of the project. All other thought is banned. Thus, this isn't mo rage. A 100% anti capitalist progressive.

7:55 what are the reasons most folks can not afford paying basic services, b/c unions make basic services expensive or money does not trickle well and non union folks are paid shit?

the non union construction workers can collect SNAP so it's kool.

Maybe edgemore will disclose the salaries of their squad of bullshitters.

It was Mo Rage and this is.

Progressives were against this boondoggle for all the reasons I wrote above with the leading reason being it was environmentally irresponsible to the point of stupid.