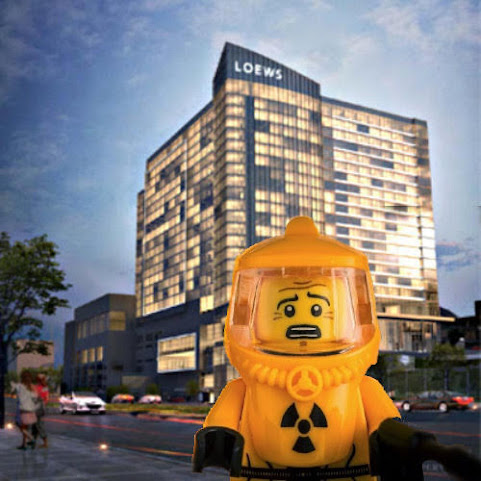 Presser posted from a lesser blog regarding this town's money losing gamble . . .

"After years of wrangling and an unveiling delayed almost two months because of the coronavirus, the 800-room Loews Kansas City Hotel is set to open Monday — without the fanfare, or guest book, officials had anticipated.

"Loews is the first convention hotel completed in downtown since the Marriott more than 30 years ago. The 24-story tower, at 1515 Wyandotte St., cost more than $320 million and was originally set to have its grand opening April 2."

"The city is staring at a $4.4 million shortfall because of a combination of a 2015 deal that awarded millions in payments and incentives to the 800-room convention center hotel and an agreement on catering fees for the city's convention center."

THE KANSAS CITY CONVENTION HOTEL GRAND OPENING NEVER REALLY HAPPENED AND THE PROJECT IS ALREADY A BUST BEFORE IT STARTS!!!

Tax fighters and critics warned us of the impending drama that's now news fact and a debt that has to be paid for generations.


No.... now open for BLM convention to use and mans death to destroy the city. Plenty of pizza for everyone between riots.

Mike Burke made 2.5 million I wonder if he tossed a couple bucks to Slie?

^^I don't know Maude, did you ask him? Why are you asking us? Why don't you have anybody else you bore with stupidity like this?

It's going to be interesting to see if that $4.4M/year number that the city is having to pay ends up increasing.

I would guess just like the Marriott years ago this hotel will file for bankruptcy and the lenders will take a bath. No one cares about anyone stupid enough to lend money to a hotel but taxpayers will end up taking a bath too.

The Marriott was built with public money. The public money is made available ONLY because a city has poor and disadvantaged people. Thus poor people in Kansas City made both of these hotels possible. (ergo the stipulations of the funds provided).