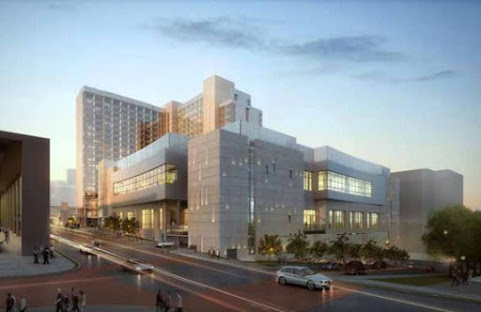 The money line is the most important item here . . .

"A series of deals the city struck years ago to get the Loews Kansas City Hotel built have taken officials by surprise as the costs from those agreements start coming online as work begins for next year’s budget.

"The city is staring at a $4.4 million shortfall because of a combination of a 2015 deal that awarded millions in payments and incentives to the 800-room convention center hotel and an agreement on catering fees for the city's convention center.

Mayor Quinton Lucas said money will need to be taken out of the general fund to cover the shortfall in the coming fiscal year, which starts in May."

About as hard to predict as the sun coming up in the east every morning.
But, of course, Burke and his transactional buddies did just fine and got out before this "project" had to be financially viable.
Once again, the KCMO electeds leave a business negotiation wearing nothing but their big smiles and socks.
If you look around the table and don't see the mark...it's YOU.
Pony up KCMO taxpayers.
It never changes.

I thought sly was gonna cover it

The only Sly can cover is the Sun and Moon

Sly a lobbyist now, he got your back!

The Roaring Twenties People will spend money on Food Beverage Entertainment and Travel Most will not stay in high end hotels. Bass Pro,And the likes Sells a lot of Camping equipment .And Middle Priced Hotels do well.I Like Hotels but many like camping Or they have an R.V.MANY R.v.Parks on the Outskirts of the Metro area are full in the Summer.

Of course they are gonna cut money from the following:

* Downtown Community Improvement District, which raises funds to clean and beautify the downtown area.
-> So the downtown won't be as clean which will affect how people see KC

* The Office of Culture and Creative Services (OCCS) was established in 2015 to lead cultural development efforts for the City of Kansas City, Missouri. The mission of the Office is to serve Kansas City residents by bolstering and catalyzing arts, culture and creativity and by leveraging the arts as a strategy for economic development, neighborhood revitalization, and cultural vitality for its citizens.
-> So we will now pay lip service to KC's artists while cutting the budget of the very office set up to help them. Also, there goes money for artists helping with neighborhood revitalization.

* The purpose of the Film Development Program, a program of the OCCS and the Kansas City Film Office, is to to recruit film, television and new media productions to the City. The goals of the program are to increase the number of film productions in the City, increase and sustain the number of local jobs in the industry, strengthen the City’s national reputation as a place for creative businesses, and promote the unique features, characteristics and assets within Kansas City neighborhoods.
-> So we'll weaken this effort as well by cutting their budget (see link above as it is part of the OCCS). Guess we really don't want to encourage productions to film in Kansas City (and in the process we'll be kissing that revenue Goodbye)

* LaunchKC’s accelerator platform partners Kansas City corporations with tech startups. We select startups that align with each corporation’s goals, providing them access to exciting innovative products and services. Startups chosen for the program will receive unprecedented resources from our corporate partners.
-> Not anymore they won't. Or at least not nearly as many. Looks like the mission of this office doesn't align with what our Mayor wants for KC.

* KCSourceLink helps aspiring startups and established businesses find the right business resources to start, scale or accelerate.
-> I guess helping startups is not a part of the Mayor's vision for KC. I wonder why that is. Gould it be that startups don't have the money to make political donations?

* International Program. Harder to find info on unless this is it.
http://www.globaltieskc.org/
Over the last ten years, we here at Global Ties KC have brought over 3,000 individuals on 416 custom-designed programs to Kansas and Western Missouri. Each participant is hand-picked by various national partners for the excellence of their work and character. These visits result in tens of thousands of dollars in revenue for local businesses and thousands of hours of valuable exposure to world cultures and future world leaders. Through our work, we foster citizen diplomacy across the Greater Kansas City Metro area. We renovate Kansas City’s view of the world and the world’s view of Kansas City.
-> Hmmm, now we don't want to have an even larger global footprint? Why is that? A bigger global presence means more investing in or trade between KC and the global community. Is this a bad thing?

Remember when all of us around this blog said this hotel deal was going to screw the pooch? Can you hear the pooch yelping in pain? Oh but you monumentum people were all slobbering about how good this would be for KC. Well good and fucked has arrived hope you assclowns are happy.

So will VisitKC report on how many conventions they have booked for 2021 and future years because of this new hotel? Conventions book 3-4 years out so they should be working on this. Where's the report?

Hello! Quinton never put legislation forward to study or stop this money pit as a Councilmember before ground was broken so what’s his beef now?

Thought we ended this hotel because 23 million tourists visit KC every year ?

That's all these deals do is hurt tax payers. Yet our city officials keep doing the same shit over and over again. Don't believe me? Look at the financing on the P&L and now this. Money consistently coming out of the general fund to fund projects for billionaire developers. All the while we have potholes all over this city and the people of Jackson County are getting bent over on property taxes.

But hey, long as people like Mike Burke and JE Dunn can make millions off the backs of the people, all is right with the world! Right?

None of this is new. The City simply doesn't know how to plan, and Mayor Q acts like it is the hotel's fault. That's like me telling my kid that, despite pledging to pay for college, I forgot he was actually going to college and didn't allocate the money like I should have so he's SOL.

Then Q says it's the previous administration's fault. That's not how it works. You and everyone else at City Hall knew the deal - you simply chose to ignore it. It sure would be nice to vote in city leadership with actual experience running things.

But let's all vote in a new sales tax to buy some fire trucks instead, because we should have complete confidence they know what they're doing. Then some smarty pants will complain about property tax assessments, not understanding that the county is a whole different barrel of taxes that pays for god knows what. It's really f-ing dysfunctional around here.