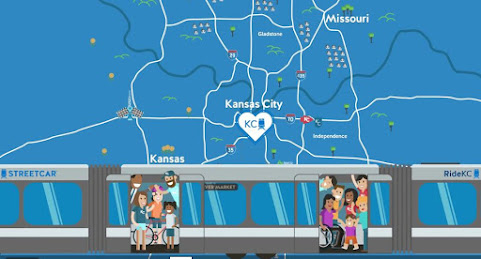 Desperate for a win amid rising crime and failing infrastructure, Kansas City politicos champion freebie bus service in a desperate attempt to quiet complaints from the plebs by way of handouts. Sadly, their plan is already falling apart under close scrutiny.

RECENT HISTORY SHOWS US THAT FREEBIE TRANSIT CONSISTENTLY FAILS AND NOW KANSAS CITY IS ON A COLLISION COURSE TO MAKE RIDING THE BUS AN EVEN WORSE AND MORE DANGEROUS EXPERIENCE!!!

Remember that our blog community warned against the danger of free bus rides LAST YEAR. Credit where it's due, here's a fact check editorial in today's newspaper via Patrick Tuohey guest column . . .

Making the entire system free is not without considerable risks — risks that seemingly haven’t been assessed. This was underscored when, in an interview with local newspaper The Pitch, KCATA CEO Robbie Makinen offered: “Just because nobody else is doing it, that’s not a reason for us not to do it. What’s wrong with trying it? What’s the worst thing that happens? It doesn’t work, and Robbie gets fired.”

But other cities have offered fare-free bus service — and abandoned it. A 2002 study by Jennifer Perone and Joel Volinski of the Center for Urban Transportation Research at the University of South Florida concluded:

“A fare-free policy might be appropriate for smaller transit systems in certain communities, but is ill-advised for larger transit systems in major urban areas because experience shows that in larger systems, a tremendous amount of criminal activity, as well as a sharp increase in ridership, caused higher maintenance costs, labor costs, and operational costs and drove away existing riders.”

In a 2012 book, “Implementation and Outcomes of Fare-Free Transit Systems,” Volinski detailed a fare-free pilot program in Austin, Texas. Ridership increased by as much as 70%, but there were issues of “overcrowded buses, disruptive passengers and unhappy bus operators.” The program was discontinued. Denver tried a similar program and also discontinued the effort.

Riders get it. According to a 2019 passenger survey from the public transportation foundation Transit Center, “most low-income bus riders rate lowering fares as less important than improving the quality of the service.”

Sneak past the paywall to read the whole thing.

In the end, Kansas City just can't afford it. We only have money for giving to special interests and developers.

As I have said all along, nothing is free so somebody has to and is going to pay for it all.

As seems to be the case with many liberal programs, the very real potential of unintended consequences is ignored. In fact, they're never considered in the first place. It's like some weird sort of Utopian mindset crossed with PC intentions and the belief that an approving, media echo chamber will make it all a rousing success.

Many of the problems inherent to government programs revolve around the idea that established patterns of human nature are never taken into account.

In other words . . . the mindset of small children.

Johnson and Staubio, the original streetcar guys who have climbed the ladder to the top shall do as they please. And there is nothing you whining rubes can do to stop it.

Dave is right. Yesterday on the radio, some city official (Was working can't remember the name, it was on 710.) said that it would run 10 to 12 million a year.

The cost is the cost and someone, in this case, the beleaguered KC Tax Payer will be on the hook.

NO ONE THOUGHT THIS OUT IN ANY WAY.


Of course this was going to be a bad deal, but liberal logic is just not real smart and also one sided they think they know it all. Suck it up you've done it again you people never learn. Just like the Bernie Sanders idiots FREE FREE FREE FREE.....NOT

"... a tremendous amount of criminal activity, as well as a sharp increase in ridership, caused higher maintenance costs, labor costs, and operational costs and drove away existing riders.”

"Criminal activity" - the muddle class says this anytime two poor men are seen talking to each other.

This is just ignorant fear mongering, translating into class warfare.

It's almost impossible to believe the abject stupidity of the argument put forth by 9:53.

Byron I'd explain it to you but like a lot of other things explained to you it never seems to sink into that pathetic little brain of yours.

So Byron why don't you explain where you live and all about the free bus service where you live provides. How much property tax did you pay last year to support all these so called free services you think you're entitled to?

You're a leach on society who is poor by choice but feels I and others should support your lazy ass.

Free buses is literally the dumbest thing I've ever heard. I hope robbie loses his job for all the bad shit that's going to happen because of this and how he has pushed citizen of our good city to be on the hook for an additional $10 million when we can't even raise a family here because schools are so bad

The priorities of this city should be to make it liveable and desirable for families to want to move here. This city is targeting childless people in the mid 20s and early 30s, which isn't smart because they tend to move around a lot and do not offer a consistent tax base. Families don't give a shit about free buses, a streetcar, and bike lanes. They want safe neighborhoods and decent school, which KC has neither. Not only that but it gets ignored

But not you, Stupor Dave. Or you, chuck.

So you can both die already, safe in the knowledge your money will not help the less fortunate.

The only thing free bus service will provide to the unfortunate is an increase in muggings, beatings, shootings, and stabbings.

Criminals who reside in poor areas are not part of the unfortunate class. They are there to further take advantage of those who can't defend themselves.

Free bus service just allows the thugs to travel a bit more cheaply, and to congregate their future victims in well-defined spots

10:52 go get a job ya lazy ass bum. Best get down on you knees and thank God people like Chuck, Dave and myself pay the taxes so you free loaders can sit around all day whining about shit.

^^But stupid dave, you worthless prick...you don't live in KC so your taxes don't pay for shit around here!!! Now get the fuck off this blog and go fuck up your own town's blog!

^^^No, Dave, stay around! I enjoy your comments, and nobody cares what the Chimpster thinks.

^^No dave, go away! You bore us. Everybody loves the chimpster.

"Nothing is free" you bus riding leeches. And yet over priveledged moralistic twits expect to hop in your cars and drive anywhere you want for free even though they cost trillions to build and maintain.

It does not say Kansas City Missouri or Kansas for that matter.

It's Kansas City as a whole you stupid bitch. That means the whole metro area you jack off hater. You seem to always have something to say if it's about Blue Springs or Lee Summit even Kansas City Kansas. How about for once you add something to the discussion that applies other than your lame personal attacks.

For all anyone knows you don't even live in the metro area and are Byron's sheep flogging buddy. Then again you're probably are Byron.

They love to laugh at you, you little monkey clown. It's different lol

A continuation of city policy designed to benefit one sector of the city population.
After watching this city govt. shipwreck, I can see why MAGA is so popular.