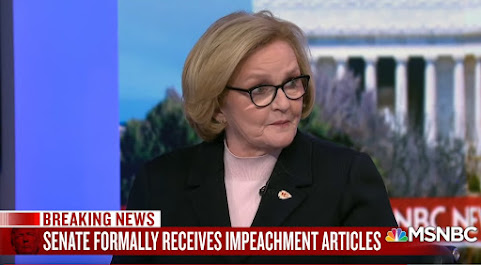 Apropos for #TBT and shared by one of our MOST BRILLIANT TKC READERS . . . The Missouri power player adorns herself with a flashy and sharp Chiefs pin as she presents the case against Prez Trump.

As we noted previously, given the Commander-In-Chief congratulating the Tennessee Titans and ignoring Kansas City's historic playoff comeback victory . . .

PROGRESSIVES CLAIM THE KANSAS CITY CHIEFS AS THEIR OWN & PLAYOFF VICTORY AGAINST THE TITANS WILL ALSO BE A WIN AGAINST PREZ TRUMP!!!

Meanwhile the competition inside the beltway is getting tense during this election year. Here's a rundown and a glimpse of recent commentary related to the former Missouri politico and now Missouri pundit who continues her reign as a power player.

Check the links from "many sides" of the debate:


Credit Where It's Due: Clarie McCaskill Successfully Started New Career As Commentator


This is Claire McCaskill's No. 1 piece of advice for career re-launchers

Women who want to reinvent their career at midlife (or beyond!) have so much to offer. Yet oftentimes, they get in their own way. "Don't go at it with the attitude that 'I'm not sure I can pull this off,'" former Missouri senator said on Wednesday's "Morning Joe" when asked her best advice for women over 50 who are looking to restart their career.


McCaskill explains the importance of the Senate floor's 'ghostwriter'

As the Senate accepts the articles of impeachment, former Senator Claire McCaskill explains the role Elizabeth McDonough, the first woman parliamentarian of the Senate.

Late Tuesday, MSNBC made sure to express their anger and disappointment with not only CNN, the Des Moines Register, and the moderators, but all six 2020 Democratic presidential candidates for skipping over newly-released impeached documents from Rudy Giuliani associate Lev Parnas and refusing to make it the focus of the debate.


McCaskill: Trump Will Be Known as a President That Was Impeached for the Rest of His Career | Breitbart

Former Sen. Claire McCaskill (D-MO) asserted Wednesday during MSNBC's live coverage of the House vote to send the articles of impeachment to the Senate that President Donald Trump "hates" that he will be known as a president that was impeached "for the rest of his career." | Clips

McCaskill's relaunch was successful but I'm not sure if it's more than a hobby for her. Something to keep her out of trouble. Seems more fun than just hanging around Missouri or St. Louis.

But more likely a sign that the world of cable news is very closely tied to the Democratic Party elite. Looks like a closed club to me.

^^^^^^^^ That's because you have to bring something to the table, loser! Otherwise nobody cares what you think!

Clare needs to create her own tuna-scented candle like Gwenyth did. Proceeds to Pocahontas’ campaign.

Gawd she is such a neanderthal.

I still remember her talking on national news shows about being a fan
of the Cardinals while completely ignoring the Royals and that's when the Royals were good.

The House Of Representatives led by Nancy Pelosi, is a contemptible, disgraceful goat rodeo that has beclowned itself along with the Main Stream Media for the last 3 years.

The Impeachment of Trump, encouraged by parasites like McCaskill, over the subjective, biased, partisan interpretation of a conversation centering on corruption in one of the most corrupt nations on the planet, prior to releasing American Tax Payer cash to that same corrupt nation is a joke.

The forces aligned against Trump are legion. The media, the Deep State, Hollywood and the opposition/Fascist/DNC have sought Impeachment since the day Trump took office.

The crimes committed over the last 3 years, were committed by People in the media like M. Isakoff, the hundreds of Deep State unelected bureaucrats who with criminal premeditation and intent sought to illegally concoct out of whole cloth imaginary crimes (Russian Collusion), subvert the FISA court, illegally spy on political opponents, suborn perjury and lie under oath about all of the aforementioned.

The conversation that Trump had with the new president of the Ukraine, had it been Obama, would have been hailed by the shitheel fucks who really run this country, as good stewardship of our cash.

THIS IS A RECORDING.

Chucks absolutely correct only a stupid brainwashed socialist bed wetter kid like7:55 would believe differently. Don’t worry though kid when your socialist criminal leftist democrats take over all the free shit they promised you idiots for your vote will disappear and your little do nothing punk asses will be living under a bridge in your socialist utopia stupid fucks

So, when President Trump wins re-election he won’t be impeached anymore, does that mean the dimwits are going to keep wasting tax dollars and time trying to impeach him again? The do nothing dimwits strike again!

I don't give a damn what Claire does in her new job.

The fact that she was fired from her old job is satisfaction enough.


NO... Trump will be remembered as the President that was impeached and a victim of the democrats jealousy and hatred who rained on their parade.
The democrats will go down in history as the party who broke the law with false impeachment articles and treason.

No, Trump will go down in History as the third US president to be impeached.
Re-election, if it happens, will not erase that fact from his record.

I expect that, fifty years on or so, Trump will be viewed more as a anomaly during a time of transition in the Country, somewhat like Chester Arthur or Calvin Coolidge are now.

Air Claire talk about a brand.

7:24 A, you and claire have to bring more to the table than your incarnated twats that mika likes so much.

THe only thing Claire is known for is liking the smell of Greitens balls.

she particularly likes to nibble on his balls while eating chili.

Sweet analogy..... too bad Chester & Calvin didn’t have the internets.

and she shot a man in Reno just to watch him die, right, nitwits?

She divorced him for smoking pot on a boat..... low bar triggers.

Chuck, by withholding aid, that Congress approved, your dictator broke the law!

The crimes committed over the last three years were committed by your dictator & his shadow state.

Oh bLIEron, get your news from anybody other than the commie news network or msdnc because they only tell you lies, god you are the dumbest tranny on the face of the earth.

The GAO gave their “OPINION” , they are not lawyers dipshit, this has already been reviewed and at this time no laws were broken because it was given before the deadline at the end of September, Jesus Christ you’re stupid.

The crimes committed by the fake news networks and your idiotic dimwit party along with Clinton, biden, peelousy and even romney’s Kids is tantamount to bribery and robbery, these clowns got paid re-distributed tax money that was supposed to go to the Ukraine but hey, these criminals are ok because they are dimwits so it’s good to be a dummocrap because they are above the law. These crooks have made their families millionaires and broke many many laws, Trump is the best thing that evar happened for the people and you sick bastards hate him, effing morons all of you.

Trump is also going to be remembered as a 2 term president after being impeached by the corrupt Dems. Impeachment didn't hurt Clinton did it? He still scored tail on the Lolita Express.

Byron, it's kind of icy in Raytown, but the new coffee shop at 6111 Blue Ridge Blvd will open after 10. I'll save the usual table. And dont worry...the saps here won't catch on. They insist on pretending you are in Virginia.

Claire is not at midlife...she is way past that.

Trump: McAssKill Will Be Known as a Woman That
1) Was Married To a Cocaine Addict While She Was Jackson County Prosecutor
2) Selfishly Bucked Her Own Party Leaders To Advance Her Political Career in Missouri
3) Contributed Money To Her Perceived Weakest Opponent in the Republican Primary
4) Accused Todd Akin of Being a Misogynist While Simultaneously Being Married to a Man Who Allegedly Beat His First Wife
5) Married a Multimillionaire Who Was a Nursing Home Slumlord Feeding On Government Contracts
6) Lost Her Senate Seat to a Young Upstart Missouri Attorney General
7) Became a Routine Fixture on Liberal Network Propaganda News Programs
8) Got Caught Repeatedly Cheating On Her Tax Responsibilities

Trump will go down in history as the 2nd president impeached for rejecting Hillary.

^^^ 2 US presidents have now been impeached for humiliating Hillary Clinton!

That’s the joke I heard!

Cannot say it enough F__k Off Claire. Go spend your remaining days minding your own business at your Cayman islands condo.

Best comment on TKC in a very long time.

And look what she put up with from Hubby #1 until she divorced him. It wasn’t until he got CAUGHT on a CAMERA smoking pot on a boat that she did anything.
Now she is hitched to a fat old pig (but very very rich) and is no longer in power. Stay on your side of the state Claire. KC does not miss you.

Blieron, how about you find a blog in your own state, keep mooching gubmint cheese, and leave KC alone. We all despise you.

Just please, Air Claire, don’t go on the beach in a bathing suit. No one in the world deserves that. Except maybe Byron.

Relaunch for “women over fifty?” How about “defeated old bat pushing 70?”