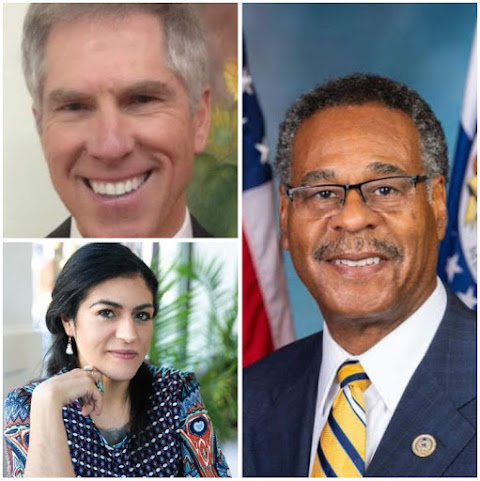 Over the weekend, the Democratic primary challenger to Congressman Cleaver imploded and was "cancelled" by many of her progressive allies.

Clay Chastain steps up as main challenger to the longtime incumbent and statesman of Kansas City.

It's worth noting that this district hasn't elected a Republican since before the Great Depression but in this missive the KC transit activist seems to think he has a good shot. Checkit:

Clay is set to oust liberal democrat Cleaver from Congress because not only does conservative Republican Clay have favorable name recognition, is a centrist and has a long record of trying to improve Kansas City with his innovative ideas, Clay's also got game and Cleaver doesn't. In the 2016-2018 Congressional term (after having been in Congress for 12 plus years) Cleaver was rated one of the least effective Congressmen. That is because Cleaver has no original ideas and lacks the ability to inspire others to follow what scant leadership he provides. Cleaver is a life long politician (35-years) lacking any significant legislative accomplishments (though, he does have a street in Kansas City named after him). Cleaver is a good man, but his game is old. And no Cleaver, invoking outdated KKK comparisons, voting to impeach the President and supporting the City's forced underhanded effort to rename the Paseo after Martin Luther King does not constitute having game.


Clay is an independent-acting working man (electrical engineer, home builder, transit & landscape designer, machinist, professional auto mechanic, etc.). Cleaver is a preacher and party line democrat. Clay has a plan to Fix America & Conserve Earth (FACE). Cleaver mostly just gets on his moral high horse and preaches to America. On the home front, Cleaver has done little to help our corrupt, crime infested City in decay (though he did garner $20 million of federal pork for the City's novelty streetcar line which hasn't improved transit for our inner City). Clay saved Union Station from demolition, protected the petition process from on-going City abuses and won the City's only rail-based transit election.

We need fresh ideas in Washington to help improve Kansas City, our nation and the planet. Clay's proven he's got game and the resolve to persevere.

Maybe it’s time for me to run, TKC.

Anybody but the do nothing race baiting cleave, and I mean anybody

He is a complete dork, but at least he is not corrupt like cleaver

Love or hate Clay, he seems to have more interest in KC than many of its current leaders.

^^^^ He should run for office in Virginia. Where he legally resides!

but Clay is a White guy -- and, per all those AT&T "just OK" commercials..

Clay comes off in debates as manic and unable to focus on his talking points.

It's time the race-baiting, do-nothing congressman steps down. He is ineffective. Let's give Clay a shot. He really does seem to have the most common sense.

The Three Stooges!
And all in one place at the same time!
And it's KCMO!
What a surprise.
Need to throw some of the Jackson County and city electeds into the mix to truly understand why issues like property taxes, homicides, street conditions, and financial responsibility are the way they are.
Sad.

Clay is bizarre and twisted. Having said that, he hasn’t scammed the SBA out of over a million bucks, defaulted on a judgment that was awarded to Bank of America for over a million bucks, and then had his paycheck (and his wife’s) garnished. Cleaver drains the KC pride right out of a person. I can’t stand Clay, but he’s got my vote.