Here's a bit of social media and social justice follow-up to a recent story that OUR BLOG COMMUNITY WAS AMONG THE FIRST TO BREAK YESTERDAY BEFORE THE TWEETFEST.

The TLDR: Candidate Salazar incorrectly claimed that Congressman Cleaver had a photo of Bill Cosby in his office based on a partially obscured screenshot of his office from a recent report.

Now, we talked about this yesterday morning but a Democratic Party activist and influencer BLEW IT UP and news spread across the nation regarding this serious mistake. 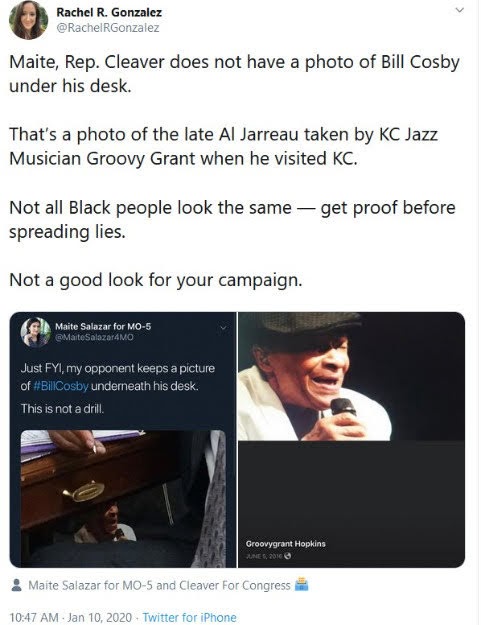 Yes, mistaking legendary jazz man Al Jarreau for Bill Cosby is cringe-y and embarrassing -- The association she made was even more serious and disparaging given that Cosby is now a convicted sex offender. Moreover, the error has cost candidate Salazar all of the warm, fuzzy, love she has been feeling from so-called progressives in the Democratic Party amid a barrage of insults and accusations of racism against the Latinx contender.

PROGRESSIVE TWEETERS HAVE BEEN DENOUNCING SALAZAR FOR TWO DAYS AND REFUSE TO ACCEPT HER APOLOGIZES!!!

"I would like to offer my deepest apology. I made a mistake by insinuating my opponent had a picture he did not have in his office. I overstepped, when I should have left it alone. When you're when you are running a campaign of this magnitude, mistakes are made."

After that, it got even worse and so here's another go from the utterly spanked candidate . . .

"This was an insensitive mistake. Again, I offer my apology. I will continue to fight for all the things are needed in the 5th district."

The pile on has been brutal and mostly focuses on alleged racism. Heck, I think somebody even called TKC "Hitler" for merely noting that it was good idea for her to apologize.

Just a quick sampling of the replies:

"This is the kind of crap we so often see from those who falsely claim the progressive mantle. Disqualifying."

"If you're capable of making mistakes of that magnitude, then you shouldn't be running."

"“insinuating?” It seems you may suffer from the racist belief that all Black people/men look alike. If not, then you certainly suffer from acting and speaking rashly and from “going low” in your campaigning. Any one of these raises serious questions about your fitness to serve."

As usual, the infighting among the Democratic Party is intense and what so many strident activists repeatedly berating the "non-binary" candidate (who is underfunded and doesn't really have a legitimate shot to defeat Congressman Cleaver) might forget is that they risk alienating LGBT voters they'll desperately need to defeat Prez Trump in 2020.

Admittedly, there are similar debates among the alt-right vs. Republicans but progressives just seem to take their political animosity over alleged racism far more personally.

All of the "virtue signaling" and social media posturing looks fun, gratifying for all of the nobodies, activists and bots who comprise Twitter and clearly is more important than any semblance of a policy debate that most voters are far too ill-informed to conduct.

she brought it on herself. If she doesn't legitimately have a chance to win, she shouldn't have run.

When Democrats want the LGBT vote they pander for it, but when it comes to disagreement with them the reprisals are swift and cold-blooded.

It is what it is. Hell I look just like George Cloony. Sometimes it can be difficult, but, I just muscle thru it.

Well, after careful consideration of all the facts, I'm ready to cancel this bitch, excuse me, bitchx.

So, what parts does it have?

This could be good or for her, look how many people know her now. Somebody needs to knock Emanuel “mlk” cleaver jr off his high horse.

If it rides a bike the Socialist will make it a queen.

Apologizing makes you look weak. Thats where she blew it.

The bigger question is why does Cleaver have anyone's picture under his desk? He ashamed of it or something even creepier than that?

Is there some reason the cleave has al jarreau between his legs?

Does non-binary mean retarded? Cause she seems to be retarded.

Awesome damn point Dave, what is up with that? Is Cleaver a closet gay?

What a stupid little bitch...was big on making fun of people on social media and a stupid junk shop on Troost. Not from Kansas City or at least has not lived here for a long time. We dont need her in Congress.

But Bitchx made me laugh!

She was not a serious contender. Never should have been involved.

"Non-binary"
Definition: Right brain and left brain have no connection. Lots of empty space in there.

She should be barred from politics. The racist shit stirring cun..

Ask the president of the KCAC WHAT he knows about her and WHEN he knew it.

She has, or a least had, what she called a vintage shop called The Skullery Maid on Troost. It looked like a junk shop to me. As far as I know, that is her business experience. Her website tells us practically nothing about her. Fail.

Why is she lying about being non binary? She has a video bragging about her abortion. Google M. G. Salazar...that's her.

The whole campaign seems spurious to me.

I love it when extreme left wingers have circular firing squads over trivial stuff.

Cleaver has better taste in music than we knew about.