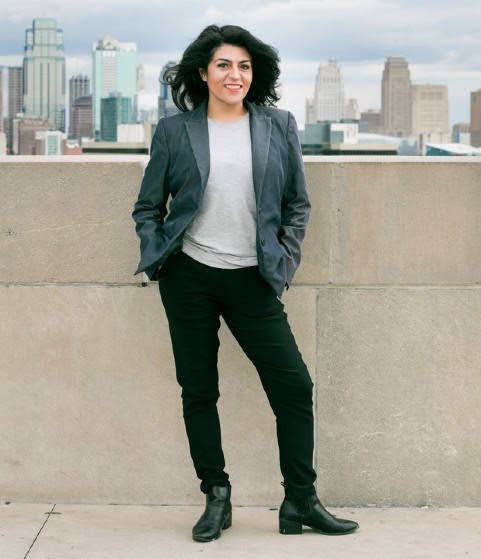 Learn more about Maite Salazar at her website. She declares herself proudly, non-binary, progressive, a supporter of the Green New Deal and has launched a campaign against Congressman Cleaver in the Democratic Primary.

She doesn't do many interviews or answer a lot questions outside of her bubble BUT her friends and followers allowed her to make a bold accusations without any proof.

The latest example, candidate Salazar claims that Congressman Cleaver has a picture of disgraced comedian Bill Cosby under his desk. 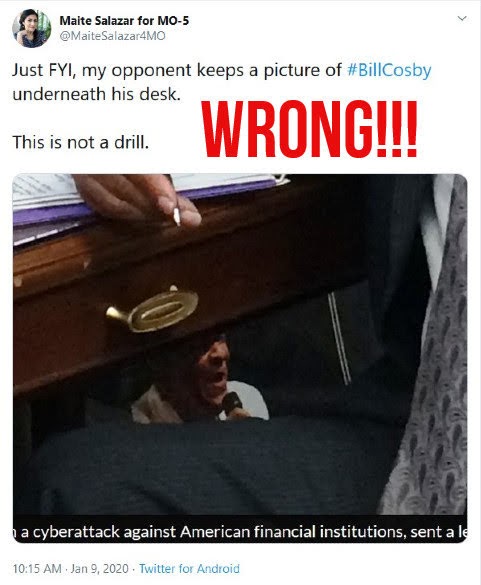 THAT'S INCORRECT!!! WE'VE TALKED TO INSIDERS WHO KNOW AND THERE IS NO PHOTO OF BILL COSBY IN THE CONGRESSMAN'S OFFICE AND A CRUDE SCREENSHOT OF AN OBSCURED HALF-FACE IS THE ONLY EVIDENCE CANDIDATE SALAZAR CAN PROVIDE!!!

Reality check: It's a jazz dude with a Kansas City connection and one of those junk posters promoters share with politicos.

Update . . . The candidate apologized and we'll have more reaction soon.

What's more important is that the progressive Blue Wave 2020 doesn't seem to care about facts or reality when making their claims and the comments have offended many urban voters who are watching the contest:

"I guess every black man is Bill Cosby now?" a TKC reader remarked.

And overall this signifies a weakness and growing division betwixt progressive and establishment Democrats wherein "woke" LGBTQ advocates have become increasingly insensitive to urban core denizens . . . And this division has hasn't been lost on supporters of Prez Trump who are increasingly making a more adamant pitch to African-American and Latino voters.

Hey TKC, did you hear about the mayor of TJ? He was sporting a "Make Mexico Great Again" hat when the caravan came through.

The world is changing.

She'll accomplish nothing other then building a big wardrobe for her Instagram.

She wants that free money so she can sit at a desk all day doing nothing in D.C.

These type of people made me go from a Chicano prider at 21 to a yankee doodle dandy with nsdap sympathies. Fuck them all and the gender non conformative horse they ride in on.

Is she even from Kansas City?

Damn disgrace. She certainly hasn't lived her for quite awhile.

On one hand, Cleaver is retarded and should not hold office. On the other hand, this bitch sounds just as retarded too. This is why the KCMO will always be shit

Sounds like a recipe for disaster for holding any sort of public office. Four corn kernels in a big pile of beaner shit, if you ask me. KCMO has made its bed. Now sleep in it! Maybe next time you will learn who to vote for!

Heck if she rides a bike the Socialist will make her a queen !

This bitch specializes in making fun of people on Social Media...local atheist activist who despises believers of all kinds.

Ran a consignment shop around Troost last I heard.

Well, that was fucking stupid. Who cares whose picture he has?

Damn she is stupid.

She knows she can't win. She is just collecting donations. Her friends at the KCAC are too cheap to back her.

What a completely dumb cunt.

I sure that a man pretending to be a woman? Looks manly to me.

I hope she at least realizes that should she accept any donation based upon her running for an elected position then she needs to register her campaign with the Federal Election Commission. It doesn't matter if she is doing it as a joke or not. She could work on that green new deal thingy from federal prison.

What is binary? Two dicks at once?

^^It means she doesn't give a damn what white men think.

I assume that you actually know, & you're just being a dick.

Q: Did you hear about the transgender "woman" entering politics as a Democratic Socialist?

It might be possible he/she/it is more stupid than Sharice.

I have to say, anyone who can't figure out what sex they are likely can't make a decision that is beneficial for those who can, so I think I'd pass on this person.

It certainly A-ok for a latin bitch to label another. Wonder how far that shit would fly had it been a white guy ? Notice the admittance of a double dong with AOC wasn't mentioned.

Her website says nothing about where she is from, or what her education is. Nor does it say what she does...although she used to run a junk shop on Troost. Dumb.

Her website says nothing but superficial cliches. She thinks you all really stupid.

she's not binary but defines herself relative to it. is that a logical fallacy?

either way, may make my neck & shoulder sore.