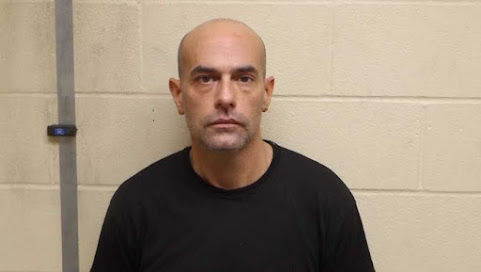 We've been talking about INTERNETS PETITIONS AND PROTEST FOR WEEKS and now local law enforcement steps in . . . Here's the latest:

KANSAS CITY, Mo. -- Platte County prosecutors charged the owner of a West Bottoms burger restaurant known for being open 24/7 with second-degree assault and armed criminal action on Friday. Judge Abe Shafer signed the warrant for his arrest on Dec. 6 and asked that he be held with no bond.

KANSAS CITY (KCTV) - The owner of a West Bottoms restaurant soon to close its doors now faces criminal charges. A warrant was issued for Rockstar Burgers restaurant owner Brian Smith for second-degree domestic assault and felony armed criminal action. He is currently in custody at the Platte County Jail.

Credit to KMBC for the Platte County Mugshot . . .

The owner of Kansas City's Rockstar Burgers has been charged with domestic assault and armed criminal action.Brian D. Smith, 42, is accused of pistol-whipping a woman he had been in a previous relationship with at a Parkville apartment he rented.According to court documents, the woman told police that she was asleep in a bedroom with another man Nov.

He caught his girl in bed with another dude and pistol whipped her. These hoes ain't loyal. Not saying she deserved it, but I get why he did it.

He's a tweaker. His stupid restaurant is a drug hub for gay sex and criminals and lost souls. Look how pathetic he looks.ive been there ONCE and it was like a portal to hell.

Why oh Why couldn't HE just Kick the Dust Off His feet and WALK-AWAY?

@4:16 Wouldn't wish that on my worst frienmy..... As long as he still has breath in his body their is still HOPE!

Horse Meat Sandwich w/ Tater Tits and a side of HIDDEN CAMERAS in the bathrooms !!

It's the fucking West Bottoms, there isn't any food place that's ever been open down there that hasn't had it's share of issues. It comes with the location.

Hope it was worth it, dawg. Now you're going to prison and you get no pussy or beer. Never let a female drive you to commit a crime, no matter how much it hurts. You're heart broken? Talk to a bro, lift some weights.

So, is he single? Seems like a great guy who just needs someone who understand's him!

Shouldn't let talents and experience like this go to waste.
When is he going to file for KCMO city council?
Join the club!

So let me understand this, he has a gun and pistol whips his ex-girlfriend, and then the guy she's in bed with kicks his ass WHILE HE HAS A GUN?

Yeah, there's a badass for you!
What did he do, take his gun but forget to bring along any ammo?
He be havin' lotz uv fun in de Jail.