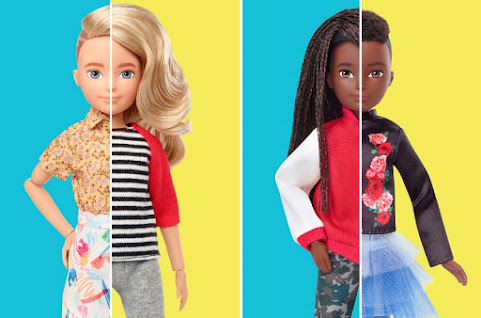 I know what the TKC holiday raffle prize might be . . .

Time: 'A Doll For Everyone' -- Meet Mattel's Gender-Neutral Doll

Closer to home and after the jump, we're sharing slightly less controversial news links that didn't fit anywhere else . . .

KANSAS CITY, Mo. -- Without referring to President Donald Trump by name, Cindy McCain, wife of the late Sen. John McCain, made a passionate speech for a return to civility in American discourse and politics.

RESIDENT SAYS CONDITIONS HAVEN'T IMPROVED MUCH. ROACHES IN THE APARTMENT IN JULY. WE DIDN'T DO THAT. THAT'S FROM ROACHES. SHE SAYS THEY ARE STILL HERE IN SEPTEMBER. HER AIR CONDITIONER, ONE SHE HAD TO PROVIDE HERSELF ALL SUMMER LONG. THEY DON'T CARE ABOUT OUR LIVES OR HEALTH.

LENEXA, Kan. -- The Lenexa Police Department has identified a woman who died in a crash at the entrance to Shawnee Mission Park. Rachel Bender, 27, of Lenexa was pronounced dead at the scene of the crash early Saturday morning. Police were called to the 7900 block of Renner Road around 1 a.m.

NORTH KANSAS CITY, Mo. - Students at Nashua Elementary are focusing on kindness and inclusion all week long as part of the The nationwide campaign works to empower students and create a more inclusive school environment. All week long, students are doing activities and lesson plans included in the Start With Hello program.

In Johnson County, officials have decided they're right about how much their big-box stores actually owe in taxes. Those same stores are working to pay less in property tax, and are using some unique approaches to reduce their tax burdens. The dark store fight has been popping up across the country, most recently in Arkansas.

Show-Me Victory In His Grasp


'She was my baby': Heartbroken KCK mom plans to fight gun violence after daughter's death

KANSAS CITY, Kan. - Nikita Union first spoke with FOX4 on August 9, the day after her 21-year-old daughter Queena Andrews was found dead in her apartment that she shared with her boyfriend. "The police told me she was playing with the gun and accidentally shot herself," Union said.

Each year, the Kansas City Police Department publishes a report that includes the year's crime statistics. Here are some key figures from the 2018 report. A former Overland Park police officer lost his law enforcement certification last month after he was caught writing false seat belt tickets.

On this week's episode of the Northeast Newscast, we are speaking with Liz Harris, marketing and events coordinator with BikeWalkKC.

In the top of the first inning, some mild baseball stuff happened, but also Rex Hudler shared that he just learned the word "contrarian" after hearing someone describe manager Ned Yost that way. Whit Merrifield led things off with a 13th-pitch battle that ended in a double.


Kansas City officials could decriminalize marijuana possession up to 100 grams

KANSAS CITY, MO (KCTV) -- Kansas City could get more weed-friendly. A proposed city ordinance would decriminalize possession of up to 100 grams of marijuana. It was originally 35 grams. The Public Safety Committee is scheduled to vote on the proposed ordinance on Wednesday.

Polluting the minds of children even more.

^^says the polluted mind himself. Don't worry bitch, it's not for you! Unless you want one? Do you want one dummy?

@12:38, not even a decent comeback, what a total scumbag you are. No original thought, just a loser. Don't worry, we're sure you'll get a free copy of that doll. Dumb ass.

@ 12:38 aka Byron and it's for you bitch/red foreskin that you play with dolls you sick creep!

@1;00PM(Stupid dave} and yet you're the one who came with an unoriginal take in the first place. Weird.

It's clear that you are the "sick creep".

1:12 grow the fuck up and stop thinking you're seeing me in every post you read on here

^^You seem dumb. Have you ever heard of punctuation? Typical right-wing fucktard stupidity for sure.

^^You also need to grow the fuck up.

Oh Chimpy. You keep saying people are stupid, but monkeys barely have an IQ! Lol

This is dumb, they already have no genetalia.

WHY? What's the point? Children are to young to carry such a heavy load of Sh!t.

Gays, Lesbians,Transgenders, all want the same thing: For the Majority to accept their crazy, the only reason the public acceptance has gotten as far as it has is because there are many Gays, lesbians and soon to come out transgender democrates in government, local, state, and in Washington. (AOC eats pussy) I am sure glad Trump isnt a fag, a lesbo, or a tranny!! TRUMP 2020!!! And hey if you are a freak, and a man who likes to take it in the ass, or a woman who likes to eat pussy and scissor or a man or a woman who wants to trade places with your gender, by all means do what you do, just keep it back in the closet, keep it private and enjoy your life, the masses act like they accept your lifestlye because your lifestyle went from being a freak to electing freaks into politics to try and make your lifestle "NORMAL" its not normal and it will never be! The masses: no matter how many gay flags you fly, no matter how many rainbow stickers you put on your car, will NEVER truley accept the fact that your lifestyle is acceptable. First of all if you belive in GOD we all know that your lifestyle is unacceptable, but more importantly if you dont belive in God your lifestyle doesnt contribute to procreation, last I knew two dudes cant concieve a baby, and two women screwing each other cant either, and the transgender people might have already contributed to keeping humanity alive before they figured out they were in the wrong costume, only they know. Fags and lesbos might have contributed once upon a time keeping humanity going with procreation, and then decided they want to fuck their own gender, Thats is a mental health issue. If you are LGBT thats your business - keep that business private, the rest of us love you as people but dont have to accept your actions.

Gender neutrality is BS. You are born XX or XY. No amount of hair shaving or hormone treatments will change that.