This week the Kansas City NEXTGEN took to the street in record numbers for a protest that made local history.

The Green New Deal Renaissance is a surprise from the Heartland and two deeply red states BUT shows us younger voters working to mobilize for 2020.

Here's the round-up along the EXCLUSIVE PIX FROM THE SCENE and the narrative according to protesters . . . 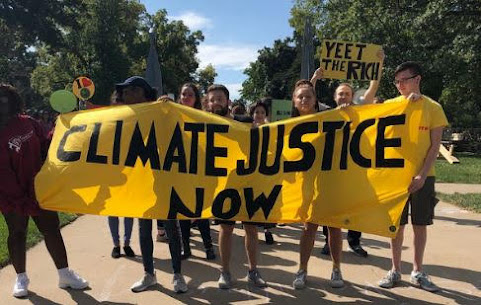 Kansas City, Missouri - Over 750 people attended what may have been the largest climate strike in Kansas City history today. The strike kicked off when hundreds of young people with the Sunrise Movement and other organizations left their classrooms and workplaces today to meet up at the University of Missouri-Kansas City and march to a nearby climate strike rally at Brush Creek/Theis Park. Local members of Sunrise Kansas City joined the millions of young people striking around the globe to call upon the political and media establishment to take action on the greatest existential threat of our time. 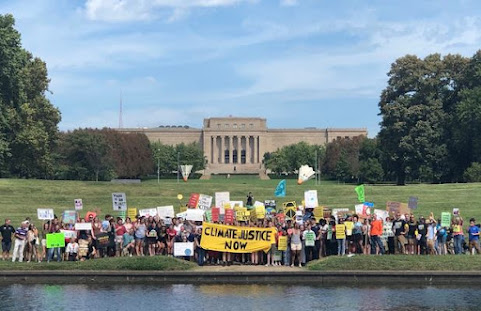 “Climate change is the biggest threat to humanity. It is on us to move forward and push for change in all aspects of our lives. We must support big and bold initiatives like the Green New Deal,” UMKC Student Body President Justice Horn said. At the rally, Horn also pushed for the University of Missouri system to divest its $13 million of fossil fuel holdings. 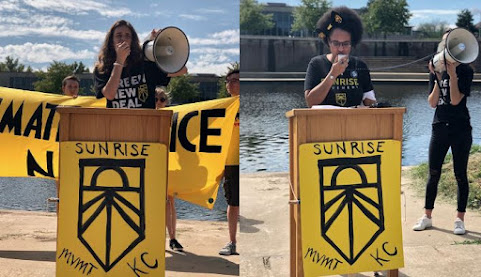 The 11AM student rally was one of thousands of strikes taking place across the U.S. At the rally, young members demanded a regional and federal Green New Deal, a city climate emergency declaration, and a just transition for frontline communities.

This large coalition delivered a swath of messages related to the climate crisis before marching on the Country Club Plaza. This included Kansas City Tenants Organizer Maya Neal, who highlighted how Kansas City’s affordable housing crisis intersects with climate change.

“I’m anxious about climate change because I know that as it displaces people worldwide and within our own borders, it’s only going to exacerbate the struggles of vulnerable people like me, who already can’t afford to stay in place,” said Neal. 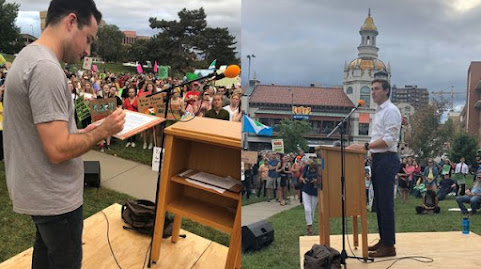 4th District Kansas City Councilman Eric Bunch, and Ward 1 Overland Park City Councilman Logan Heley joined the coalition and spoke at the rally. Both politicians became the first on the local level to back the Green New Deal, responding to the many demands of their constituents in Missouri and Kansas respectively.

“We demand the next president of the United States to prioritize solving the climate crisis by enacting a Green New Deal as their first job. We demand that our congresspeople take the Green New Deal pledge and reject any fossil fuel money. And we demand our local, elected officials: governors, mayors, state legislators, and city council members to stand with us in declaring a climate emergency and implementing a Green New Deal for Kansas City and Missouri,” Missouri State University graduate student and Kansas City-native Amy Ramirez said. 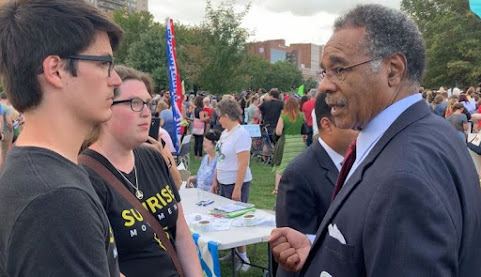 Democratic Congressional Rep. Emmanuel Cleaver II (MO-5) visited briefly and spoke with some of the young people at the evening rally, including Madeline Meloy, 23. He did not back the Green New Deal or pledge to refuse fossil fuel money, but Meloy remains hopeful.

“We had a productive conversation which made clear that he values environmental justice, and this makes me hopeful that he will come to see that the Green New Deal is the best way to achieve that as we continue to speak with him in the future,” said Meloy. 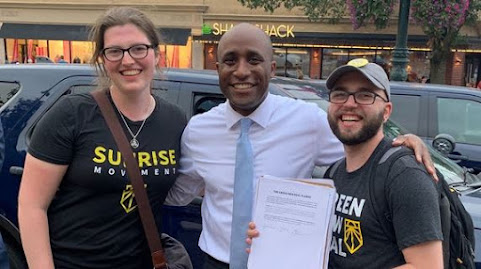 After the rally, the climate strike coalition shut down the intersection of 47th and JC Nichols Parkway as they marched near the Plaza Art Fair. Kansas City Mayor Quinton Lucas arrived in time to march and backed the Green New Deal, paving the way for further climate action in Kansas City. The strike and rallies are the first of many to follow in the coming months as young people and the rest of the coalition pressure more leaders to address the climate crisis. Ramirez agrees.

“No more injustice, no more destruction, and no more corruption. Today we strike for First Nations people to call for respect of indigenous land. We strike for frontline communities who have been displaced and/or hurt by climate injustice. We strike for our lands and oceans to protect biodiversity. We strike for workers, families, minority communities, plants, animals, and future generations to achieve the future we know that we can have.”
##########

KCUR: Over 100 Kansas City Students Walk Out To Demand Action Against Climate Change