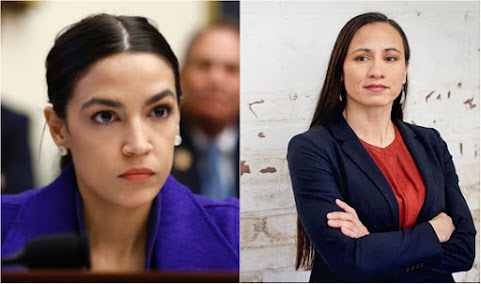 An ongoing war of words has a newbie Kansas Congresswoman caught in the middle of a fight for the heart and soul of the Democratic Party.

Whilst lesser newsies are writing love letters to Rep. Sharice Davids and placing them gently on her desk . . . Here at TKC we're only interested in the drama.

A decent summary of how this hot mess started . . .

HOUSE DEMOCRATS STRIKE BACK AGAINST TEAM AOC IN DEFENSE OF REP. DAVIDS!!! 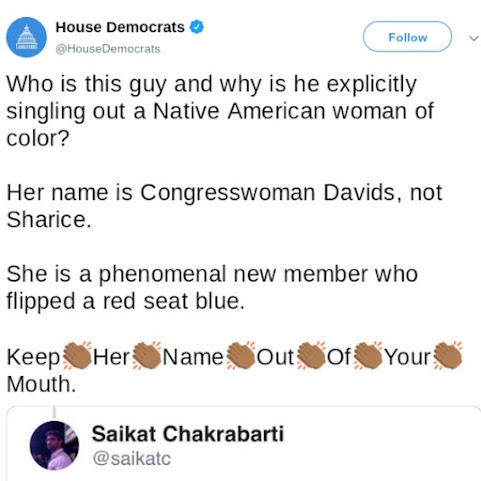 Again, this fight has extended beyond mere social media bickering and now threatens to embroil the House Speaker.

SHAME ON KANSAS CITY PROGRESSIVES FOR LETTING REP. SHARICE CONTINUE WITHOUT COMMENT ON HER PART IN THIS DEMOCRATIC PARTY WAR OF WORDS!!!

Media outlets across the nation are picking up on this story but Kansas City political "journalists" are content to keep their readers stupid and wait for DNC talking points on any issue before they can commit to the written word.

Sharice Davids is smarter than Cortez. She's keeping her mouth shut. It's a good strategy.

And THIS is how Trump wins 2020 if anybody was really thinking about it.

Looks like all of the Dems and their staff are trying to get their licks in on Sharice.

She keeps her mouth shut because she doesn't do anything. When a bill passed in the Democratic controlled House to keep the USDA from moving to KC, what did Davids do to stop it? Nothing.

Obama said he was afraid the Dems were going to have a circular firing squad and that's what's happening.

These idiots must have all went to the Kris Kobach school of how to kill your political career. Then they skipped the course on, When You STFU In Public!

You Republicans are dreaming that this is somehow so terrible. Nonsense. This is how policy is decided. I support AOC in this fight. Giving the administration more money only allowed this atrocity to continue. Davids is AWOL, & Pelosi is obstructing justice by not bringing impeachment charges against Trump. Mueller gave Pelosi everything she needed, so why is she waiting? The Constitution says to impeach. It doesn't say only impeach if you think you can win in the Senate. Do your duty, which is not worrying about whether they will do theirs.

Today we are witnessing the evil consequences of inaction.

You fucking liberals are a one note song.

I say that Herr Fuckhouser is impeached from this blog right now. Come on Tony do your civic duty and shut this nutcase up. Mueller didn't deliver a damn thing but a huge ass bill for the taxpayers to pay based on some lunatic democrats losing Hillary getting elected. Oh and also Byron you dipshit, you have to be somewhere in body and mind before you can be deemed AWOL. Davids has been well documented in not having anything to say ever since she started running for office.

I second 9:18’s motion, Tony, IMPEACH BYRON THE BUTTPLUG! He is a dingleberry in the boxers of TKC.

9:18: Free speech is for nutcases, too. No one forces you to read every post. Use your scrollbar. That's what I do with Chuck and Dave, although I did note Dave does not know the difference between gone and went.

Under Trump a 94% Approval Rating in the Republican Party, an all time high. Ronald Reagan was 87%.

9:49 has no real answer to the subject at hand but wants to be a English prick instead. Simply put he is a troll and a poor one at that. “Went” is the past tense form of the English verb “go”. “Gone” is what we call the past participle, and would normally be used in combination with “have” to form what we call the “present perfect”. In very relaxed English, it is common for people to use the past tense form where the strict rules of grammar require the past participle. The practice is more prevalent in some regions that others. In my part of the United States where I lived most of my life, I had neighbors who own successful companies in the building trades, and who are much more wealthy than I am, who might say “I have went” and I would not be surprised. I don’t judge them for it. When they say “I have went”, I know exactly what they mean. But I noticed around this area snobs who are factually illiterate always play the, "You said that wrong game" when having nothing worth saying otherwise.

Stop me if you've heard this one.

A Bengali computer scientist, a Puerto Rican Socialist, and a lesbian Hochunk walk into a House of Representatives.

The Bengali says, "I'm not a member, but I pull her strings (points to AOC)."

The Puerto Rican Socialist says, "I'm a member, and I'll clip her wings (points to Davids)."

The lesbian Hochunk says, "I'm an MMA fighter, when I punch women it stings (points to AOC)."

The Sergeant at Arms drew his weapon and took the 3 into custody saying, "When imposters try to infiltrate this chamber Liberty rings."

If not for white men these two liberal crybaby's would being using a stick to dig a hole to shit in.

Ocasio is a child. This is the future you chose america, autistic brown childern virtue signalling in a footrace to the bottom.

Winds are changing against AOC and Co... exposing their lack of common sense.
Even CNN is calling Bullshit:

I read that and agree.

Party is over for amateur-learning-on-the-fly-bartender AOC.
She is being exposed as a fraud and her whacko ideas are nonsense.
She has contributed nothing and set legal migration back 5-7 years.
She needs a new handler.


Sharice Davids is just as nuts as AOC, Omar, and Talib she's full of hate and is a racist. Remember her shirt and don't ever forget it. "All of my heroes killed colonizers." She keeps her mouth shut to get re elected, not because she doesn't share the others views, SHE DOES!

Free speech is for LIARS, too, apparently said...

If you're scrolling past posts from Chuck and Dave, then how would you know about the "went"? Weird.

Keep the anger alive so the base doesn't realize mass deportations are not happening and the wall isn't getting built. Suckers. Racist tweets is all you are getting from your hero. No real accomplishments. Obama defended the border better.

After reflecting on the above comments, I can see some of the conservative points are worth considering. I will be less of a libtard shithole in the future.

3:33 what racist tweet??? You must be smoking too much cod oil, there was no racist remark, your overlords how fooled you again.

Seriously, if you don’t have better common sense than that your screwed.

ICE is doing there own raids.. happening as we speak.
AOC should be happy that many are offenders in addition to breaking American made laws on being here.
Try to go to Canada without a passport and see what happens.
AOC appears to be a tool of foreign governments trying to get terrorists in to destroy America.
Never forget 911!

Don't forget, I am a nationalist.

POTUS Trump tweet trampled the "Squad" so viciously and perfectly this week. The four fraudsters labeling themselves Justice Democrats: Occasio-Cortez+Omar+Tlaib+Presley, are calling virtually everybody that is not a non-white female, racist. DJT, Pelosi, the Congressional Black Caucus, moderate Dems, and many others, are turning it back on these four ACTUAL RACISTS. The QUAD SQUAD OF FRAUD is declaring a mission to get more NON-WHITE WOMEN elected to replace DEMOCRATS WHO ARE MODERATES AND MEN!!!


It's fitting for our POTUS to clapback on the bitchy tweets wherein these four RACISTS and MISANDRISTS claim Pelosi and Trump are RACIST, AND THAT HE SHOULD BE REMOVED FROM THE WHITE HOUSE.

When are you losers going to recognize that the poster going under the name of BYRON is just a post middle aged troll posting from RAYTOWN. You have all been played!

We couldn't care less if he was posting from a tent on Brokeback Mountain....or from an old outhouse at a defunct West Virginia coal mine....or from the bushes Slie dove for cover into by the Cheesecake Factory! WE ARE PLAYING THAT CLOWN. BUT, IN A SELFLESS WAY....TO HELP HIM CRY HIMSELF TO SLEEP EVERY NIGHT!

MELINDA HENNEBERGER| Trolls the readership- what’s left of it- by using her tired liberal slants in making a mockery those that came here legally- including those tens of thousands that brought babies over from Russia, China, etc and paid tens of thousands to DO IT ALL LEGALLY!
Any one who was adopted before Roe vs Wade- can tell her and all the pro-lifers FUCK YOU- if abortion was legal they might not have been born. They hide behind women’s rights when it’s about killing people- with a time machine they would make sure adoptees were dead.
Paper can’t go down the tubes fast enough.

Just a reminder that Davids won the primary, defeating the TRUE progressive candidate, Brent Welder. She did that because she received millions from Emily's List, an Establishment front group that never supports progressives.

I remember when the TKC community ranted about a doctored tape with Davids promising to defund and dismantle ICE. Then she would outlaw private insurance. They were scared shitless that she was a socialist. Oops.

Sorry you got a thoughtful moderate that listens to the voters of the third district. She will win by 10 points again.

The dems don't want any legislation that would help the illegal immigrants because it would help Trump. The dems are crapping on what they consider their future voting block. And they are hoping the overcrowded facilities lead to great photo ops for their campaigns. How noble of them. The dems led us down a bogus Mueller investigation trail that costs the taxpayers millions of dollars and slowed government action. They don't care about that, though. The party has gone insane. I voted for Obama one time. I'm done with the democrats, since I see them lying (as in telling a lie) much more than the republicans ever did.